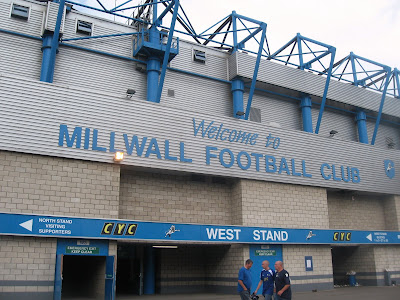 £9 each way! No! that isn’t the amount I’ve staked on Newcastle to finish in the top three this season,(I’m not that daft!) it’s the special offer I received from East Coast Trains way back in May to travel anywhere on the east line at this bargain price.
I took advantage of this cheap deal with another journey down to that London and a visit to The New Den, home to the club with the country’s most notorious supporters, who everyone it seems doesn’t like, but apparently they don’t care.

Millwall originated from a group of workers from J.T Morton’s Jam Factory on the Isle of Dogs, who formed Millwall Rovers in 1885. The Aberdeen based firm had opened their first English processing plant back in 1870. The majority of the workforce were Dockers from the East Coast of Scotland, so the club adopted the traditional Scotland colours of dark blue and white as the team kit.
The club became Millwall Athletic playing at several grounds during the club’s first 25 years, beginning on Glengall Road, then a year later played on a field behind the Lord Nelson pub up until 1890 when they moved further along East Ferry Road opposite Millwall Docks. The ground became one of the best in London as the club turned professional and founder members of the Southern League.
In 1901 they were forced into another move to an old potato field in North Greenwich where they played for the next nine years until they made the unpopular decision to move off the island and south of the river to Bermondsey. 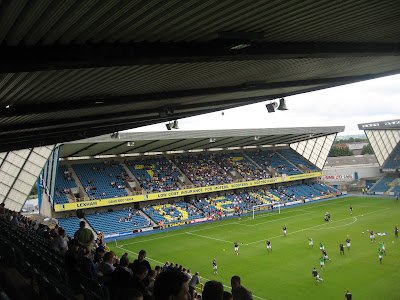 The Den on Cold Blow Lane was the home of The Lions for 83 years. The ground was surrounded by railway lines, back lanes, hidden amongst a residential area and shielded by the New Cross hospital.
The ground was well named as it was the Lions Den and home to the Millwall Roar. Unfortunately (or maybe not) I never visited the old Den, as it wasn’t the most pleasant of matchday experiences for visiting spectators and players alike, which was poetically summed up by Gary Lineker:
“I remember running on to the pitch at The Den when I was a youngster with Leicester in the 5th round of the FA Cup. The place resembled a huge trap, and the venom that hit us from the Millwall fans was unbelievable. I remember thinking to myself, maybe it would be a good idea not to score at this place!"
There were initial plans to completely rebuilt the Den into an all seated stadium, but this was abandoned in favour of a new spacious site only a quarter of a mile away.
Build on Senegal fields in Bermondsey, South London at a cost of £16 million, The New Den was the first all seated stadium to be built after the Taylor Report and the first new football stadium constructed in London for a professional club since 1937.
The ground opened on 4th August 1993, Sporting Lisbon providing the opposition in front of 17,887 spectators.
The stadium is made up of four separate stands equal in size with open corners, apart from the north-east corner where there’s a large video screen. The stands reflect each other with two tiers of blue seats with the Cold Blow End behind the goal differs slightly with THE DEN picked out in yellow seats.
The capacity stands at 20,146, the record gate came against Arsenal for a 3rd Round FA Cup tie in January 1994, just short of a full house at 20,093. 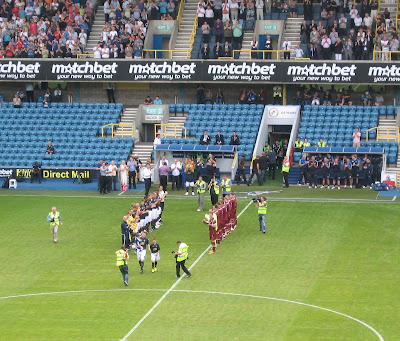 In football terms the word “legend” is brandished about far too often. For example if an average player scores the winner in a big local derby he’s then lavished with legendary status, even if the player hadn’t produce sweet Fanny Adams in the rest of his one hundred plus games.
There’s no doubting the credentials of Millwall striker Neil Harris as a Lions legend.
Born in Orsett in Essex in 1977, he began his career at Maldon Town before signing for Millwall from Cambridge City for £30,000 in March 1998. In his first spell with the club in just over 200 appearances he scored a total of 98 goals. He also finished as the country’s top scorer, winning the Golden Boot, scoring 28 times in Millwall’s 2000-01 Division 2 Championship winning season. 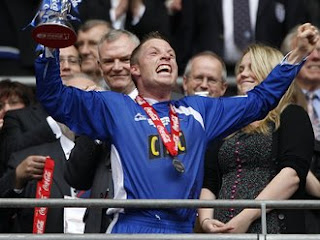 After a loan spell at Cardiff City he signed for Nottingham Forest in December 2004, leaving the Lions as their all time League scorer with 93 goals, a record he shared with Teddy Sheringham.
His time at the City Ground was an unproductive one, scoring only once in 33 League games which resulted him being farmed out to Gillingham on loan during the 2005-06 season.
After being released by Forest in January 2007, Harris re-signed with Millwall on an 18 month contract, on his signing he stated, "There is something special about this club, it brings out the best in me as a player and a person. It feels like home, it always has done. I can't wait to get started."
In his second appearance he made club history by scoring in a 4-0 win over Rotherham to become the clubs outright record league scorer, then in January 2009 he became all time goal scoring record with his 112th club goal during the 3-2 away win against Crewe Alexandra.
Neil again played a valuable part in last seasons promotion campaign notching another 18 goals. His current goal tally stands at 135 in 400 appearances going into the new Championship season.
But it’s not just on the football field which makes Neil such a legend. He was diagnosed with testicular cancer in 2001, but after receiving surgery and intensive radiotherapy treatment he was given the all clear the following year and returned to football.
As a consequence he set up a cancer charity - The Neil Harris Everyman Appeal in conjunction with the club and the Institute of Cancer Research to help raise money for medical studies and to raise awareness into a disease which has risen by 70% in the last 20 years and continues to increase. 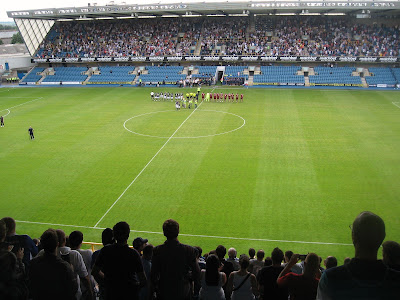 Heart of Midlothian provided the opposition for Neil’s big day, which was my third Anglo-Scottish clash in the five games I’ve attended so far this season.
The last time I saw Millwall in action was near the end of last season in their away win at Colchester, when I boldly predicted that they’d be a Championship club when I came to The Den this season.
The SPL side clinched victory thanks to two perfect free kicks from Craig Thomson. Eggert Jonsson gave the visitors the lead from the spot on 15 minutes after a Robinson trip on Wallace, but the shine was taking off their performance as Hearts Algerian defender Ismael Bouzil was stretchered from the field with a suspected fractured skull.
Millwall hit back with two powerful headers from Liam Trotter each side of half time until Thomson stepped up from 25 yards, his first effort curled over the wall, then he hit the winner with a blistering shot.
An entertaining afternoon was capped off with when Neil Harris was substituted with minutes remaining to allow the crowd to show their appreciation to the Lions record scorer. 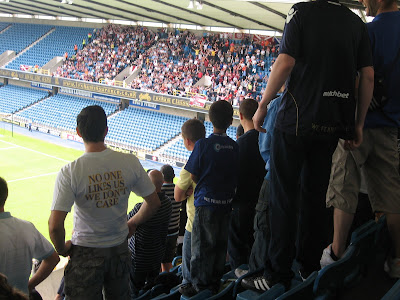 If your not a fan of the club then when is the best time to visit Millwall? Is there actually a good time to visit The Den? Other football fans I’ve spoken to say NO there isn’t, but surely this game presented the ideal occasion to tick this ground off.
I arrived at Kings Cross early after catching the 0600 from Newcastle. I wanted to spend a bit quality time in the capital as my last few trips have been fleeting visits.
My morning was spent browsing in record stores (Where’s Rough Trade gone?…Eddy) and visiting various Wetherspoons pubs, my particular favourite being ‘The Moon Under Water’ in Leicester Square.
Working behind the bar in one of those pubs was probably the gayest man I’ve ever clapped eyes on in my life. Don’t get me wrong, it’s not that I’m homophobic or anything, it’s just this guy took minceness to the extreme, he made Louie Spence look like Chuck Norris!
I headed down to London Bridge at around 1pm calling at the GBG listed ‘Barrow Boy and Banker’ before taking the short train journey to South Bermondsey.
I bought a ticket for the game in advance for the East Stand, thinking this would be the quietest part of the ground, well it was up until 5 minutes before kick off, when I was surrounded by windee-up-merchants who prefer to get close to the away supporters to give them some stick, although the best they could come up with was Ing-err-lind and constantly repeating that “Ey-yor” chant.
Afterwards I met up with my old mucker Decka T for a couple of pints in Kings Cross. This time he didn’t lead me astray like when I came down for the Brentford game, as I chose the pub in advance, meeting in the Lincoln Lounge on York Way which is a short walk from the station.
Overall I had a great day in London and I can safely say I enjoyed visiting The Den. ‘The bread knife’ has giving me great encouragement in my football ground pursuits but she’s always said that with their notorious reputation, would draw the line at Millwall. Over the last few weeks I’ve been waiting for her to ask which match I was going to, but for the first time ever she didn‘t, so I headed off on Saturday morning with her knowledge being I was going to London, meeting Decka and would be home for half ten. So when did my beautiful wife find out about my little misdemeanour? Sunday 1st August at 1247pm when this article (which you have just read) appeared on the internet. 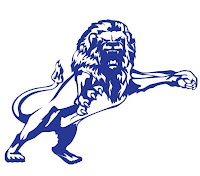