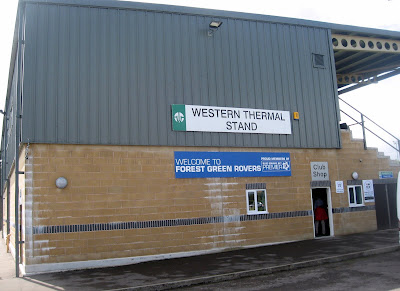 I especially flew in from Tenerife to catch my first game in the Blue Sq Bet Premier League this season. I arrived back in Blighty in the early hours of Saturday morning, then after grabbing a few hours kip, I was out of the house again by 6.30am and off to catch our bus down to Stroud for the Heed’s away game with Forest Green Rovers.

Forest Green Rovers FC hail from Nailsworth in the Stroud district of Gloucestershire, The former small mill town lies in one of the Stroud Valleys in the Cotswolds and has a population of over 6,000.
The town hosts the annual Nailsworth Festival every spring, where local artists exhibit their works in the windows of the high street shops. The festival includes many cultural and street events and a free music festival for local bands - Nailstock, which takes place on one of the town’s playing fields. 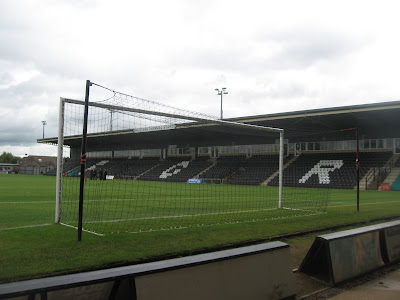 The club formed in 1890 as Nailsworth & Forest Green playing in the Stroud & District League, until becoming founder members of the Gloucestershire Northern Senior League in 1922, winning three titles in 1935, 1950 and 1951.
FGR joined another new league, playing seven seasons in the Gloucestershire County League from 1968 until joining the Hellenic League in 1975. In 1981-82 they were league champions and doubled up winning the FA Vase win a 3-0 win over Rainworth Miners Welfare at Wembley.
The following season they progressed into the Southern League, an era which saw a brief name change to Stroud FC in 1989. The decision was an unpopular one so after only three years they reverted back to Forest Green Rovers for the 1992-93 season.
The Green won back to back promotions and are still the currently the longest serving continuous members of the Conference. Last season they finished 21st but thanks to a reprieve courtesy of Salisbury City go into a 13th consecutive season, being in the top league since 1998.
Rovers have reached the final of the FA Trophy on two occasions, which both ended in defeat in 1999 and 2001 and also reached the FA Cup 3rd Round twice, the first of those was a 4-3 defeat to Derby County in January 2009 after leading 2-0, in front of their highest ever attendance of 4836 at The New Lawn.

The Lawn Ground had been home to the club since it was founded in 1890, and remained little more big lawn surrounded by hedges until the club's progression saw a series of upgrades. The ground closed in 1960 and reopened on 19th August 1961 with new terraces, a main stand, a new corner entrance and the sloped pitch was levelled off.
The ground was extended and floodlights erected in 1981. The Trevor Horsley Stand and Barnfield Terrace moved with the club a short distance to The New Lawn in 2006 which was built at a cost of £3m.

The new ground has a capacity of 5,147. The Western Thermal stand is the main stand which has a dozen rows of black seats with FGR picked out in white and 7 boxes at the rear. The stand also has a leisure club, gym, sauna, conference and meeting facilities as well as The Green Man pub.
The original Trevor Horsley Stand is now called the EESI Stand and is allocated to away fans. The stand is fully covered with eight rows of approximately 500 green flip seats.
The rest of the ground is made up of terracing, the East side is open with a scaffold TV gantry, four floodlight pylons and the team dugouts which includes a one man dugout exclusively for the fourth official (never seen that before) The north terrace is covered and now known as the Rockwool Stand
The stadium is fully functional used seven days as part of the Five Valleys Conference & Leisure Centre and was officially opened in September 2006 when the England C team played a friendly fixture against Forest Green. 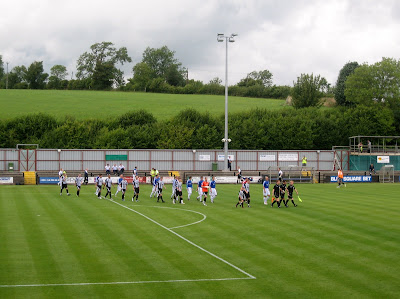 Both teams settled for a share of the spoils in an entertaining open game at The New Lawn, this despite of the inconsistencies of a pernickety man in black.
Rovers started the game brightly and early pressure paid off, taking the lead in the 10th minute when a precision through ball from Lee Fowler found Reece Styche with plenty of time and space to score.
The lead was almost doubled ten minutes later when a close range shot from Mike Fowler was brilliantly tipped onto the crossbar by Deasy, then the woodwork came into play again as a Marwood shot clipped the top of the bar to almost draw the visitors level.
On the hour mark Gateshead made a double substitution, going with a more attacking formation and they reaped the benefit almost immediately, a Baxter cross was met with a glancing header from recent signing Gary Mulligan for his first goal in a Gateshead shirt.
Rovers were gifted a golden chance to take all three points when the referee awarded a penalty after an innocuous trip on Styche by Turnbull, but Deasy made a great save to deny Herring and assure that the Heed made the long trip back to the north east with a well earned point. 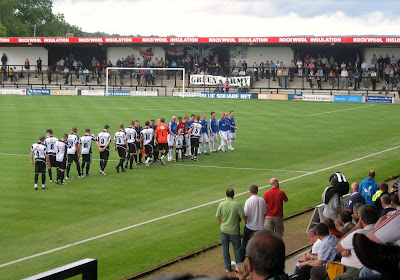 I collapsed into deep sleep by the time we reached Durham, awoken when our minibus came to a halt at the M1 services in Derbyshire for our half hour rest stop.
We arrived in Nailsworth at 1pm. Those of you who have been to The New Lawn will know that the ground is situated up a long winding mile long steep hill.
I had planned to go into the village for a drink but I just couldn’t be chewed to walk there and back, besides The Green Man’ had Wychwood and Marston’s real ales on offer, comfy settees and football on the box, so I was quite content to stay put.
A few of the lads had enquired about a taxi, but were told the nearest cab firm was in Stroud and just for starters they would charge £15 for having to make the 4 mile trip to pick you up! What a rip off! The words - the piss, taking, and surely, spring to mind.
After a long day I arrived back home at 11pm, finally feeling that I was back from my holidays. Although I was totally “cattle trucked” I still enjoyed the day, so overall it was well worth flying back for. 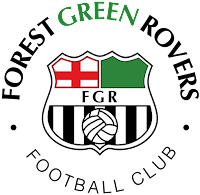 Another excellent essay on an awayday with The Heed. The background on FRG was particularly interesting - I didn't realise they were the longest continuous serving member of the Conference, (perhaps the draw will prove to be an excellent result from a team that now (like Gateshead) has a wealthy benefactor. As always, I look forward to reding the next Matchday.