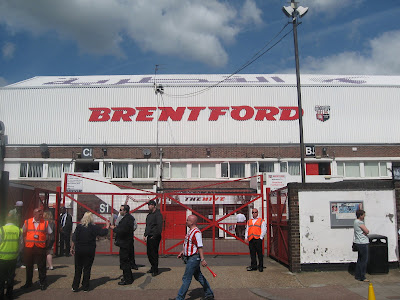 Brentford is a suburb in West London within the Borough of Hounslow, found at the confluence of the River Brent and River Thames. The area has an historic reputation as a place where it’s more likely to kick off! - and I don’t mean in the football sense. It’s believed to be the site where Julius Caesar crossed the Thames during the Roman invasion of Britain, going into battle with local king Cassivellaunus.
Other significant battles have occurred; the first Battle of Brentford involved the invading Danes led by Canute up against Edmund Ironside, resulting in a handsome victory for the home side.Then in 1642 the Royalists under the command of Prince Rupert overcame the tight defence of the regimental cavalries of Parliamentarian forces, to record a well earned win during “The English Civil War” 1642-46 season 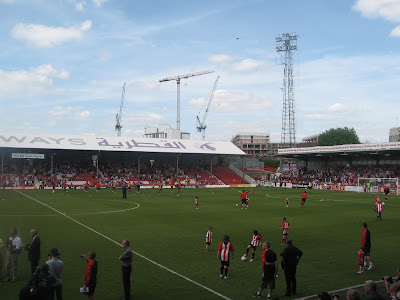 Brentford FC formed in 1889 by members of a rowing club, looking for a sport to fulfil the winter months. The club originally playing in a field behind the Wesleyan Chapel in Clifden Road, using 'The Griffin' pub as changing rooms, this being the first of several grounds in the vicinity as they became the nomads of London. The club’s next move was to Benn’s Field on Little Ealing Lane, then Shotter’s Field on Windmill Road and the last two years of the century spent at the Cross Roads, situated next to Benn’s Field.
In 1900 they moved to Boston Park cricket ground, where they played for four years until leasing an orchard on Breamar Road from the local brewery, taking with them two of the stands from the cricket field, one becoming the main stand the other placed on banking opposite on the New Road side.
The ground was named Griffin Park, after the logo of their pub landlords the Fuller Brewery, however the ground didn’t get off to the best of starts, before the opening match the stand was surveyed to be unsafe, meaning the players having to change at the nearby public baths, then within months the stand roof collapsed.
League Football arrived at the park in 1920 as members of the Division Three, this brought about a new main stand in 1927, with new offices added two years later. During the 1930’s the grounds main spade work commenced with cover added to Brook Road End terrace, New Road terrace and additional seating to the Main Stand. In 1954 floodlights were attached to the side stands, getting their first airing in October that year for a friendly against Chelsea, with the existing corner pylons installed in 1963.
After the Bradford Fire in 1985, the ground lost three-quarters of its capacity, down to only 9,500, two years earlier Griffin Park was also involved in a blaze, with half of the main stand destroyed overnight, resulting in a £800,000 bill to repair the damage.
Finances and capacity raised when the club sold land behind the Brook Road terrace, which financed a new two tier stand, split between seats and standing, known as the “Wendy House” by Brentford fans. Viewing the stand now I can see the resemblance, but it does look quite smart and nowadays it wendyhouses the away supporters.
After the Taylor Report the Ealing Road terrace capacity was dramatically reduced, work saw improvements made to the terrace in 1991-92. With this being the only uncovered section it was set aside for away supporters. Plans to add cover was rejected by the local council after concerns from local residents, and then in 2007 a roof was finally added, making it a proper home end and popular section of the ground.
The Main Stand is on Breamar Road and was also part of the early nineties £230,000 refurbishment, it has a single tier of seats which have been extended at each side, however the section towards the Brook Road End has a blacked out unemployed area, which gives the impression that they’ve ran out of seats. There’s also a square electric scoreboard between the stand and Ealing Road terrace with another in the opposite corner.
The New Road side is now named the Bill Axbey Stand in memory of one of the clubs most loyal supporters, it’s decked out with red seats with The Bees picked out in white, with the ground being close to the Heathrow flight path, different airline companies have used the roof for advertising space.
The current capacity stands at 12,763, with the record gate of 39,626 in March 1938 for an FA Cup tie against Preston North End. 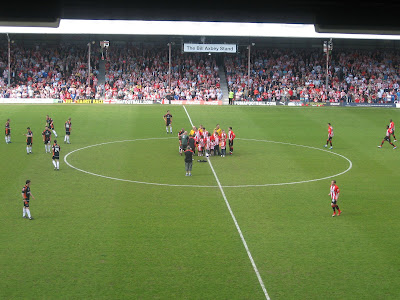 Prior to kick off there was a jubilant atmosphere around Griffin Park, Brentford fans were obviously buoyant after winning the title, while the Luton supporters had a humorous attitude towards there temporary exclusion from the Football League.
The match had an end of season vibe to it with both clubs destinies already assured, it was a bit like an end of season testimonial, the game itself secondary to the trophy presentation and celebrations that were due to take place after the full time whistle.
The opening half was limited on chances, Brentford producing the only goal attempts, a shot from Williams was comfortably saved and then a close range effort from Clarke produced a brill save from keeper Brill. The only time Luton managed to explore the opposite penalty area was Martin’s sly trip on goalkeeper Hamer which produced the games only yellow card just before half time.
Both teams vastly improved in the second half, Luton even managed to have a shot, but it was two late goals from ‘The Bees’ which wrapped up the season. The first on 73 minutes was a product of the substitutes; Poole took a free kick wide right of the penalty area, his cross met superbly with a powerful header by Karleigh Osborne.
Then in the last minute Hunt received a defence splitting pass, staying onside before eventually squaring the ball to Adam Newton, who curled his shot into the left hand corner, a smashing goal which put the gloss on the champions’ campaign.
About ten minutes before the full time whistle there was an announcement on the PA in what sounded like a desperate plea, warning the stewards to take there positions pitch side for the pending invasion, it didn’t make much difference as the field was amass with Brentford fans as soon as the referee put the whistle to his lips, the Bees fans celebrated winning the league and are another division closer to reacquainting themselves with that club with three initials to their name. 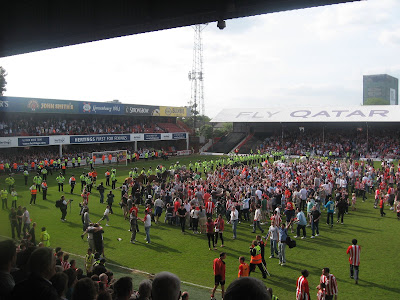 I boarded the 0730 from Central Station, the journey from Newcastle to Kings Cross taking 3 hours 15 minutes, after purchasing my travel ticket and boarding the Piccadilly Line I arrived at Griffin Park just before noon.
As you’d probably expect, with the ground being profoundly famous for having a pub in each corner, I naturally had to stop for a pint at each bar. Firstly (or should that be thirstily) I visited the ‘Royal Oak’ then around to ‘The Griffin’ before I had a half time pub break. Taking time out to obtain my press pass and visit the club shop, where fans were queuing along the street, purchasing commemorative t-shirts and scarves. I then stopped for a bite to eat before completing the set, going into ‘The Princess Royal’ and ‘The New Inn’ before heading into the ground at 2.15pm.
The game wasn’t the best I’ve seen this season, but I did enjoy the occasion. I especially liked my position in the stand, next to the local radio broadcasters - BBC London and Westside FM and three seats away from Lofty from Eastenders(circa 1985) Plus I must mention the frequently passed around box of chocolate brownies, as well as the fine selection of biscuits that accompanied my half time cuppa in the press room.
After the match I headed straight back to Kings Cross to meet up with my old mucker and Geordie-exile Decka T’ for a couple of pints. He told me he was unfamiliar with the area but had spotted a pub a short walk from the station, which was handy for my 1900 train.
We entered the street where the pub was situated and when I clocked it I turned and said “Bliddy Hell is that it! Are you sure?” The pub had no windows, just outdoor blackboards with the opening times written out in white chalk and worst of all it was the pub with no name; no sign to say what it was called.
I apprehensively entered the building and… it was fine, a bit dark obviously due to a lack of naturally light, but I was pleasantly surprised. It was good to meet up with Derek, giving us a chance to have a chat and catch up, plus we had some good crack with a couple of Spurs fans who had attended their game that afternoon. Suddenly our conversation was interrupted by the appearance of a pretty young lass, with a plastic beaker in her hand, wanting donations. Derek blindly stuck a quid in and as I fumbled for change I ask what the money was for “It’s for me, have you seen my show” she replied, not knowing what she was on about I just shuck my head, so she said “ok” and moved on.
The pub was split into two rooms and we were standing next to the dividing door, there was music blaring from next door, so I popped my head around the door, just to be nosey to see what was happening and was greeted by the site of the aforementioned lass on stage completely naked, on a chair, legs akimbo looking straight at me with a look in my eye which said ‘you owe me a quid!’
I knew the place looked a bit dodgy, but Derek just seemed to accept it as if was customary. I’m not used to this London scene, so it’s a good job I have more plans to visit the smoke next season, to get acclimatized, plus I’ve found a handy watering hole for future trips to the capital, but that’s only because it’s near the station mind!
I caught my train home without any hiccups, arriving back on Tyneside by 1015pm after another quality trip, having enjoyed a trouble free journey, visiting some great pubs, the warmth and friendliness of the Brentford officials and supporters with the day rounded off with a bit of “T & A” overall an excellent day out.
Bevvy Almanac featuring the four pubs and the other one 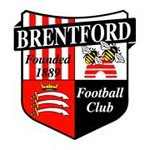