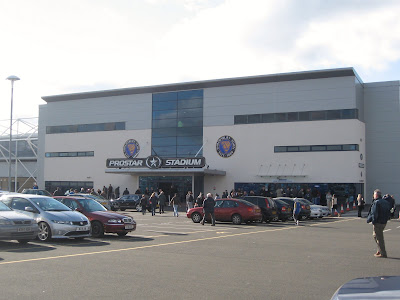 Shrewsbury is a historic market town in the county of Shropshire. The town centre features over 660 listed buildings, its medieval narrow streets and passages features many timber framed buildings from the 15th and 16th centuries.
The town remains largely intact as it wasn’t bombed during World War II. The last conflicts in the town came between the English and Welsh, its geographical position caused many tiffs between the countries amid the 7th and 13th centuries. The most significant came in 1069, when a Welsh invasion was thwarted by William The Conqueror. William gave Roger de Montgomery the town as a reward and he build Shrewsbury Castle in 1074.
The most famous Salopian is English naturalist Charles Darwin, but the town’s is mostly well known for the annual Shrewsbury Flower Show, one of the oldest and largest horticulture events in the country which attracts over 100,000 visitors during mid August every year. 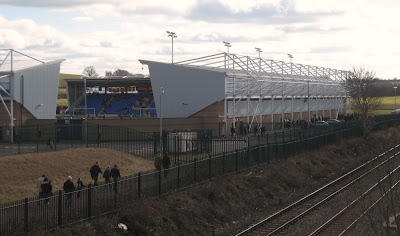 Shrewsbury Town formed in 1886 originally playing on the Racecourse Ground at Monkmoor. In 1889 the club moved to Amblers Field, where they played for four seasons before another move, this time to Sutton Lane when elected to the Birmingham League.
In 1895 the club looked to have found a permanent home at the Barracks Ground. The Shrews turned professional and drew crowds of 5,000 and stayed there for the next 15 years until an offer of a ground in the town centre on the banks of the River Severn.
After 97 years Shrewsbury Town left there quaint home at Gay Meadow for a brand new stadium on the southern outskirts of the town between Meole Brace and Sutton Farm in 2007.
The New Meadow or to give its official sponsorship name for the next four years - Prostar Stadium, was built by Hall Construction and has a capacity of 9,875.
The stadium has four separate stands equal in size and appearance with blue seats and amber lettering. The North Stand is the away end and differs slightly from the South Stand having a police control box in the corner and electric scoreboard central.
The main stand is the Roland Wycherley East Stand, which is slightly larger than the West Stand having hospitality boxes along the top, both stands have four floodlight pylons perched on the roof.
There’s the option to expand the capacity to over 12,500 with the corners filled between the Roland Wycherley Stand, South Stand and West Stand, which is only likely if the Shrews progress up the Football League. At the moment the corners are used as bicycle parks, I’ve never seen so many bikes parked outside a football ground, the stadium’s outpost means that cycling is the best mode of transport to the match. 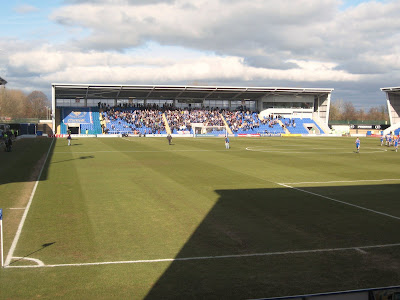 Rochdale strengthened their position at the top of League Two with a well earned victory at play-off hopefuls Shrewsbury.
The decisive goal came just after the hour mark. A free kick from Kennedy was nodding home at the far post by substitute Joe Thompson for his sixth goal of the season.
Rochdale were twice denied by the woodwork in the first half, after six minutes a wind assisted cross by Kennedy came back off the post, then a free kick from the left back hit the crossbar in stoppage time. In between Dale went close with efforts from Hibbert, Elder and Langmead was twice denied by keeper Button.
The Shrews best chance fell to Cansdell-Sherriff on 58 minutes, his near post header from a corner kick saw the woodwork again called into action.
Shrewsbury were reduced to ten men on 74 minutes, Cansdell-Sherriff was caught in possession by Dagnall, who then dragged back the striker, denying him a clear run on goal, which gave the referee no option but to produce a red card.
The leaders comfortably held on to their one goal advantage to stretch their lead at the top of League Two to nine points and look champions elect. 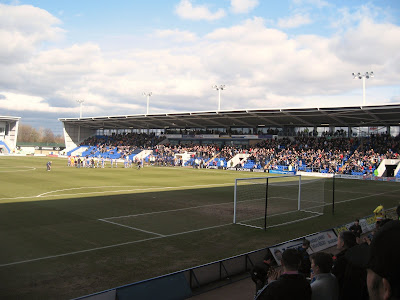 This was my first return to the banks of the River Severn in just over 30 years. I left Central Station at 0730, Shrewsbury is served by trains from Birmingham New Street and Manchester Piccadilly. I took the cheaper option of going via Manc, but due to unnecessary waiting time and an uncomfortable rattler train from Manchester-Newcastle, which was invaded by a gang of drunken scrapping Yorkshire tarts - I wish I had paid the extra cash and took the Brum route.

My previous jaunt came on the 23rd February 1980 for a Newcastle away match in what turned out to be my first and only visit to the much missed Gay Meadow.
There’s three things I can clearly recollect from that day; This was my first away match travelling with the Supporters Club on the old dirty yellow Armstrong Galley coaches, which became a regular occurrence over the subsequent years.
I do remember the match well, as Newcastle got absolutely tanked by a rampant Shrews side. Goals from Maguire, King and Biggins with an injury time Alan Shoulder penalty small consolation, which made the 3-1 score line look closer than it actually was. Although me and Ian celebrated that goal as if it was a last minute winner, two young un’s joyful seeing a goal on opposition soil.

The third was a player amongst the United line-up that afternoon. A Scottish international who was playing his third and final game in a loan spell from Aston Villa. Most Newcastle supporters might not know, or if they did, have probably forgot, that we actually had midfield schemer Alex Cropley on loan.
Cropley made his name at Hibernian, before a six-figure move to Arsenal in 1972. He signed for Villa two years later in a £125,000 deal, going on to make 67 appearances scoring 7 goals.
Proud Scot Cropley was actually born in Aldershot, his career later took him to the States with Toronto Blizzard, then on to Pompey before returning to Hibs in 1982.
An eventful career which was unfortunately blighted by injuries including a double leg break in 1975, much loved at Hibs and the Villa, but his short time at Newcastle is probably best described as ‘anonymous’ typified by that bloody good hiding at Gay Meadow.

I arrived in the town at 11.35, which gave me amble time to explore the town’s public houses, calling in The Shrewsbury Hotel, Montgomery’s Tower, The Salopian Bar and The Three Fishes. After a canny bevvy I needed to walk it off so took the long walk to the stadium instead of catching the bus.
After the game I got talking to a Shrews fan who walked me back into the town, taking various shortcuts which allowed me time for a quick pint in The Bulls Head which is next to the train station.
I caught the 1754 back to Manchester for my connecting train at 1942. After an eventful journey home It was pleasing to finally arrive back in Newcastle at 2220, having enjoyed a nice quiet relaxing day in leafy Shropshire. 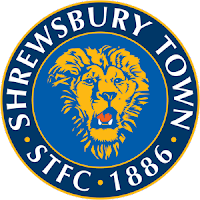