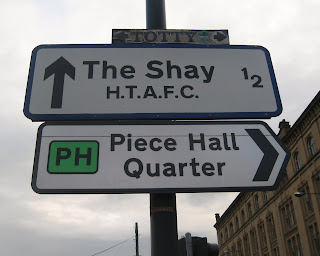 Halifax is a Minster town in the Calderdale borough of West Yorkshire. Halifax Minster dates back to the 12th century and is dedicated to John the Baptist, the towns coat of arms carries an image of the saints head, as local medieval legend proclaims the head of John the Baptist was buried here.
The town is well known for manufacturing wool and is also the birthplace of the Toffee Crisp! Toffee King John McIntosh started off from a humble shop in 1890, before becoming a thriving family business selling those chocolate delights including Quality Street and Rolos worldwide. John McIntosh merged with Rowntrees to form Rowntree-McIntosh in 1969 before being taking over by Nestle in 1988.
Nowadays the Halifax name is made famous by the bank and former building society. ‘The HalifaX’ has giving TV viewers some of the most irritating and overall annoying advertisements in the history of British television, their advertising campaigns have been a collection of excruciating visual and aural pain which is clearly at the top of my ‘foot through the tele’ moments. 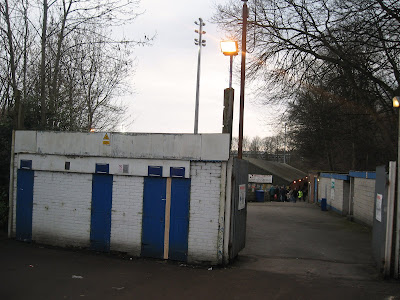 FC Halifax Town formed out of the ashes of Halifax Town who went into administration during 2007-08 season. Debts of £2million with over £800,000 owed to HM Revenue and Customs saw the club wound up. The Shaymen reformed in July 2008, be it three steps further down the pyramid, the FA placing them in the Unibond League Division One North.
The original club formed in 1911, ten years later becoming founder members of the Football League Division Three North. The club peaked in 1970-71 finishing 3rd in the old 3rd Division missing out on promotion by one place, four points behind Fulham and five behind champions Preston North End.
Town were relegated to the Conference in 1992 before finally managed to regain their Football League status in 1998, until becoming the first club to be twice relegated into the Conference in 2001/02.
This time there was no League return, losing the 2006 play-off final to Hereford United with a narrow 3-2 defeat in extra-time. That 109th minute winning goal by Ryan Green was the beginning of the end, as the club then struggled both on the field and financially off it, which finally led to the club’s death within two years. 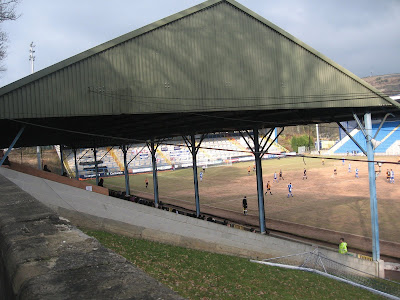 Having originally played on grounds on Sandhall Lane and Exley, The Shay was purposely built for Halifax Town’s arrival into the Football League. The name ‘Shay’ derives from the Old English word for ‘shaw’ meaning a small woodland area.
Work commenced in October 1920, players, directors and fans worked together to get the ground ready for the following season, with League football kicking off on 3rd September 1921 with a 5-0 over Darlington in front of 10,000 spectators.
The first stand was purchased from Manchester City’s old Hyde Road ground, which still stands and the only survivor of the big oval ash banked stadium, with terracing and stands far from the shrunken pitch.
The Skircoat Stand as it is now called, is still currently the main stand. The stand was once split between terracing and seats but is now all seated in blue with white lettering and gives the appearance that it may have been extended due to the uneven roof. Access is gained at the top of the stand along a long gangway, once inside at the top there’s a press area with some seats out of use. The front of the stand has blue supporting pillars and the peaked roof still has old fashioned type advertising at the side.

The Shay introduced Speedway for the first time in 1949, to accommodate this the pitch was made smaller to make way for the dirt track. The sport only lasted for three years but returning in 1965, again more construction work took place and this time it was a success, the Halifax Dukes stayed for the next twenty years and got bigger attendances than their football landlords.
The largest attendance came in February 1953 for an FA Cup 5th round tie with Tottenham Hotspur which drew a crowd of 36,885, with floodlights first switched on in 1961, Red Star Belgrade being the first illustrious opponents under lights.
The Shay is very different to what many people will remember when visiting as a '92 club', as three sides of the ground have completely changed with funding from the Football Foundation and Calderdale Council, the stadium owners since 1987.
The North Stand was built in 1998 which allowed Halifax Town to return to the Football League when winning the Conference. The stand is only used when there’s a large away support or when Halifax RLC host a big game. The South Stand is a similar terrace, completed over the following year and is the popular end with home fans. Both are large terraces with a blue frame and crash barriers with yellow gangways with excellent views of the pitch. The South Stand also has a five-a-side pitch and the Southdale lounge at the rear, there's also a large cabin temporary being used for hospitality purposes.
The East Stand will become the grounds main stand when finally completed. It replaced the old Patrons Stand which was demolished in 2000, but relegation meant work ceased after only two years. In 2008 the council stumped up £4.5m to finish the project which is has now finally complete and is planning to be opened by Easter.
The stand is quite impressive, decked out in blue with a capacity of 3,500 with hospitality suites along the top and centrally towards the south side. 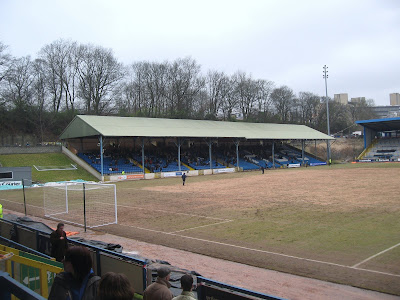 FC Halifax strengthened their position in their quest for automatic promotion with a routine three goal win over a poor Prescot side.
On a heavily sanded pitch it was the visitors who started brightly but failed to trouble Halifax keeper Hedge, a trend which would continue for the rest of the afternoon as any wayward efforts tended to end up in the stands.
Halifax took the lead after half an hour and what an absolute beauty it was. A corner kick was headed clear but fell into the path of Winters, who hit a sweet volley from the edge of the box which flew high into the net.
Winters could have capped his man of the match performance with a second on 56 minutes, unlucky to see his 20 yard effort come back off the post, however two minutes later Town grabbed their second. Marshall ran on to a through ball but then seemed to bottle out of the 50-50 with goalkeeper Paxton, but an error from the keeper saw the ball fall kindly at his feet, leaving him to poke the ball into an empty net.
Halifax were reduced to ten men on the hour mark. Baker saw red after a lunge at centre half McIntosh. After a long delay Marshall was stretchered off, the victim was viciously booed off by some of the home support while the culprit had received a standing ovation, as a neutral spectator I have to ask the question … Why?
The numerical advantage didn’t make a difference as the home team had chances to add to the score. Prescot’s afternoon was typified by left back Laundon who received his second yellow card for childishly kicking the ball away, which summed up their frustrating afternoon.
The scoreline was complete in the third minute of injury time, good work by Dean set up Lowe to fire home from close range, which leaves The Shaymen four points behind leaders Lancaster but with a game in hand, with a meeting between the two teams still to come at The Shay next month. 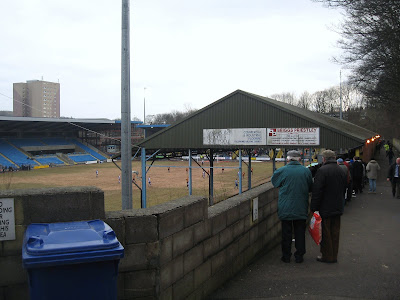 My initial plan was a visit to Keighley, to see Silsden AFC play one of their last remaining fixtures in their ground share with their Rugby League landlords at Cougar Park.
I had booked some reasonably priced direct train tickets to Leeds, but after checking the Silsden forum on Friday night I discovered the NWCL game was postponed due to an egg chasing fixture clash.
So after digging out last weeks Non League Paper, I hastily checked out the fixtures and was relieved and also delighted to find that FC Halifax were at home, meaning I could finally pay a long overdue visit to The wonderful Shay.
My pre-booked trains nicely coincided with the 35-40 minute connection to Halifax, which gave me a good hour to have a look around and naturally have a couple of bevvies. After finally finding ‘The Barum Top Inn’ I then headed off towards the ground intending to stop off at the nearby GBG listed ‘Three Pigeons’. Before I got that far I walked past the Pump Room pub which somehow was beckoning me inside.
Its calling must have been the Geordie connection, as the lady behind the bar was a canny lass from Jarrow and the pub had the equivalent of ‘a little boy in a sweetshop’ choice of fine ales, I selected a pint of Goats Milk, and as I’m a native of Goatshead, it was a natural choice.
The pub had a friendly atmosphere, full of Yorkshiremen standing at the bar having deep discussions on their favourite subject - Yorkshire! I would have liked to have stayed longer but I had a match to go to, but its one I’d recommended to any future travellers.
I enjoyed my brief stay in Halifax. Those of you who visited the old Shay will be surprised how much it’s changed, although I feel the ground hasn’t lost any of its aura or appeal since its makeover. It’s just a shame what happened to the original Halifax Town as a cracking football ground like this is wasted languishing deep in the Unibond League. 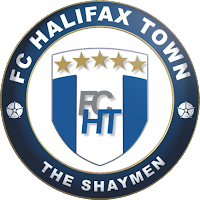 I cannot agree with your claim The Shay has not lost any of its character since the facelift. On the contrary, to those brought up with the ground the way it was, it's now just another modern stadium. Pre-revamp, it was a highly distinctive venue. Almost all gone. Even the stunning views of the surrounding hills have now disappeared. You should have popped into the Piece Hall, a wonder of the Industrial Revolution, while you were in Halifax. It's just two minutes' walk from the railway station. Best wishes with your travels for the rest of the season. Go FGIF!

Tons of character; I feel lucky to be able to support a club with one of the best stadia in Britain. Skircoat has a lovely pitched roof, two of the largest terraces in the country either side which will be crackling with spirit again some day, and now a large shiny East Stand for those who like that sort of thing. Hills still aren't totally obscured and the uncleaned mess it's in adds to character when you're not in one of the toilet cubicles with poo smeared everywhere.

Oh, and a very nice write-up. We cheered Tom Baker off as he's a fan favourite, and most still think, upon seeing the highlights on the site that it was a fair 50–50 tackle. It was an "unlucky, good game otherwise" applause.