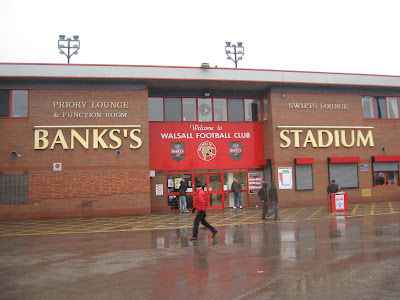 Walsall is an industrial town in the West Midlands, situated ten miles north west of Birmingham and eight miles east of Wolverhampton.
The town’s name is believed to originate from the words "Walh halh", which means "valley of the Celtic speakers”. Although the town isn’t referenced in the Doomsday Book, it was mentioned as 'Walesho' in a document dated in 1002.
The small market town developed and population increased during the Industrial Revolution, manufacturing the likes of saddles, chains, buckles and limestone quarrying.
Amongst the town’s notable people are 70’s glam rocker Noddy Holder from Slade and “Metal Legend” (Well according to my daughter Laura anyway) Rob Halford from Judas Priest, who were both born in the town.

Walsall Town were founded in 1877 and along with Walsall Swifts (who formed two years later) amalgamated as Walsall Town Swifts in 1888. Both clubs played on adjacent pitches on a sports ground in Chuckney, which remained their home as the club gained admission to the Football League in 1892 in the newly formed Second Division.
Gates topped the 2,000 mark, but after complaints from local residents in the Sutton Road area over their noisy neighbours, they moved to a new ground on West Bromwich Road in 1893 which had a capacity of just over 4,500.
In 1895 the club dropped out of the League but were re-elected the following year with a new name and ground. Walsall FC played their first game on Hilary Street in September 1896, however the club struggled financially and were evicted for two years before finally agreeing on a new lease in 1903. The Saddlers played at Fellows Park for the next 87 years, the ground being renamed in 1930 in honour of the clubs popular benefactor and club chairman Len Fellows. 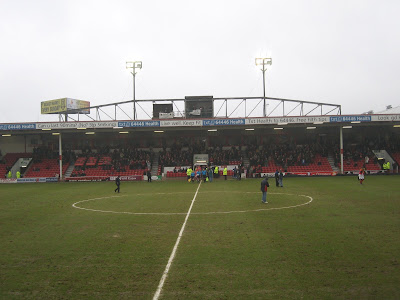 Walsall moved to the Bescot Stadium in 1990, built by GMI Construction at a cost of £4.5m. The stadium was officially opened by Sir Stanley Matthews on August 18th 1990, before a pre-season friendly with Aston Villa in front of a crowd of 9,551 with the first goal honour going to Tony Cascarino in a 4-0 Villa win.
The opening league fixture in Division Four game came the following Saturday, a 2-2 draw with Torquay United watched by a crowd of 5,219.

The ground was renamed The Banks’s Stadium in 2007 in a 11 year sponsorship deal with the Marston Brewery, however it is still affectionately known as “The Bescot” to Saddlers fans.
The H.L. Fellows Stand is the main entrance to the stadium, the stand includes executive boxes, lounges and suites and has been renamed the ‘Text 64446 Health Stand’ The stand itself is quite shallow and has a TV gantry box perched on the roof in between a set of four floodlights.
The Walsall Bite Size Stand is similar in size and appearance to the stand opposite and has a family section. Both stands are slightly spoilt by several supporting pillars which can restrict your view, however the stands close proximity to the pitch more than makes up for this.
The Gilbert Alsop Stand terrace was replaced with the new Floor To Go Purple Stand in 2003 which towers over the rest of the stadium. The two tier cantilever stand can be seen by passing traffic on the M6, which gives the impression that the ground is bigger than it actually is.
Built at a cost of £3m its two tiers are split by a glass fronted concourse, the upper tier is larger with two sections of seats, the top section having WFC in white amongst the red seats.
Away supporters use the Dains Stand, which was originally a terrace until seats were added in 1992 at a cost of £28,000. The stand has an electric scoreboard perched on the roof and a programme shop outside next to the turnstiles.
The Club have been granted planning permission to re-develop the stand in a mirror image of the Floors 2 Go Stand which will add 2,300 seats to the stadium, raising the overall capacity to 13,500.
The back of the stand will also feature a giant advertising hoarding, clearly visible from the passing traffic on the M6, a prime spot for potential sponsors. 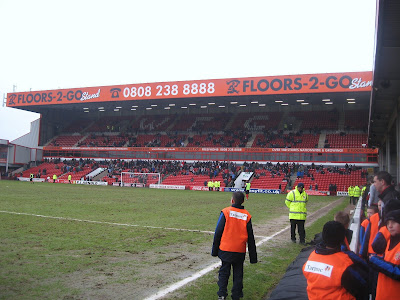 I took advantage of a family rail day out in Birmingham to slope off for a couple of hours and drop in on the Bescot. The train from New Street to Bescot Stadium station only takes around 20 minutes and cost £3 return.
I checked all my records and historical facts and I was shocked and ashamed to discover- that in 36 years of watching football I’ve never seen Walsall play.
The long wait to see The Saddlers in action nearly ended in disappointment, but a dire game was lit up in injury time, with a fine individual goal from Darren Byfield saving the day.
On a heavy cut up surface, good football was at a minimal, each side carved out one decent chance in the first half. Kevin Lisbie could have put Colchester ahead in the tenth minute, latching on to a through ball from Prutton, but keeper Gilmartin got down well to block the shot. Minutes later a cross from the left found Mattis, whose close range volley was brilliantly tipped over by Williams.
Just prior to the break Walsall were reduced to ten men when a late tackle by Hughes on Vincent produced a straight red. The Saddlers fans were angered by the decision and spent the rest of the afternoon crying for parity on the field, with calls of “off off off ” every time a Walsall player was tackled.
In the second period the visitors had chances to win it, although man of the match Gilmartin easily dealt with the idle threat. The U’s had a goal by Wordsworth chalked off for offside and in the final minute of normal time, a Gillespie volley from 15 yards came back off the woodwork.
Then with seconds remaining Walsall pulled off an unlikely victory. Substitute Byfield picked up the ball wide on the left, as the furthest attacking player he decided to go for goal himself, making a beeline to the penalty area, before cutting inside, turning the defender then sliding the ball under the keepers body. I celebrated the goal as if I was an avid Walsall fan, but the glee was for more selfish reasons, as I hate travelling a couple of a hundred miles to witness a dismal goalless draw.

After the match I caught the 1704 back to New Street, along with a train full of very disappointed and annoyed Colchester fans. I met up with the rest of the Smudgers before boarding the 1803 back to Newcastle.
The Bescot Stadium is a lot better than I imagined it would be. It’s a tight little ground with a quite homely feel to it. The newest stand is quite impressive and if plans go ahead to add a similar stand in the away end then The Saddlers will have themselves a smart little stadium, although with average crowds of under 4,000 and treading water in the middle of League One, there’s no real urgency for a bigger ground just yet. 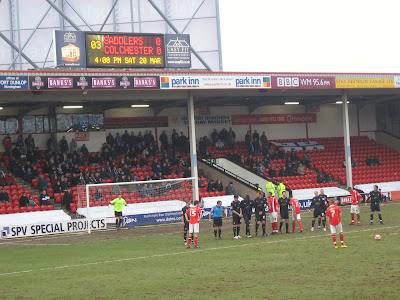 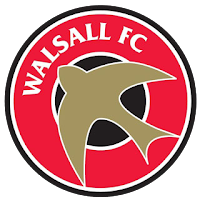 Looks like a decent enough ground. If I'm ever on a family rail trip to the Midlands...