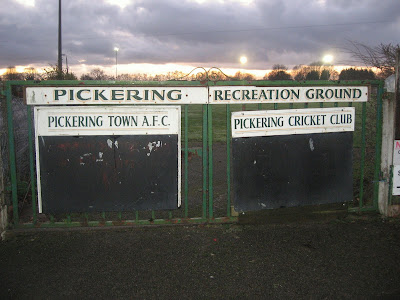 Pickering is an historic market town which lies at the south boundary of the North York Moors National Park. This tranquil town was founded by king Peredurus at around 270 BC and has been formerly known as Piceringas and Pykering.
The North Yorkshire Moors Steam Railway, which runs 18 miles north towards Grosmont on the Esk Valley is the longest of its kind in the country. Other attractions include Pickering Castle and the Beck Isle Museum of Rural Life which are popular haunts with tourists.


Pickering Town FC were formed in 1888, having spent the majority of their early years in local leagues within North Yorkshire, winning both the Scarborough & District League and York Football League during the 1950’s and ‘60’s.
In 1972 they joined the Yorkshire League 3rd Division, winning two promotions in their first three seasons to reach the leagues top division, but within four years they were back where they started after successive relegations.
In 1982 they became founder members of the Northern Counties East League, winning the Division Two title in 1987-88 with further promotion to the NCEL Premier Division achieved in 1992.
The Pikes first season in the top league was their best to date, after finishing joint top with Spennymoor United on 90 points, they narrowly missed out on the title on goal difference.
The club made a brief return to the First Division at the end of the last decade, but won promotion again after two seasons and since 2001 the club have established themselves in the NCEL Premier Division finishing a credible 3rd last season.
In 2005-06 they produced their best performance to date in the FA Vase, losing out to Nantwich Town at the quarter-final stage and have reached the second qualifying round of the FA Cup on three occasions. 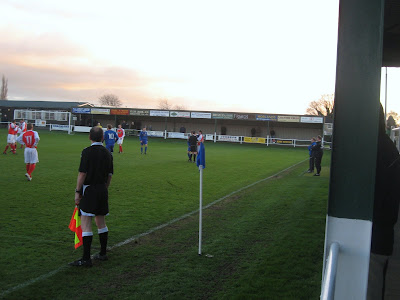 Pickering Town have played at Mill Lane since 1920. The ground has two separate 100 seated stands. The Main Stand sits on the half way line an is elevated above pitch level with a mixture of blue and red seats, green framework and the club name facing out towards the pitch. The dugouts are situated between the half way line and corner flag with the remainder of this side having hard standing.
The Stand at the far end is situated at one side of the goal, which has fours rows of red flip seats. The side opposite the Main stand is out of bounds, with only a picket fence to divide the ground from the neighbouring cricket pitch and of course this end forms the top of the famous slope. The nearside goal has a covered terrace with a capacity of 300 which runs halfway parallel to the penalty spot, next to the spacious clubhouse which has a bar with a weekly guest ale(missed out because of the car) and a large canteen at the back.
There’s five floodlights pylons which were installed in 1992 and the record attendance came in 1991, 1,412 for a friendly with Notts. County.

Pickering Town fresh from booking their place in the next round of the FA Vase in midweek were back in league action against West Yorkshire side Thackley.
The game was entertaining with both sides producing plenty of openings, be it only half chances, as both defences stayed firm in the opening half an hour.
Thackley finished the first half on top and thought they had taking the lead on 35 minutes. A corner kick was headed home by centre half Airey only to be ruled off by the linesman who spotting an infringement, even though the referee initially seemed happy enough to award a goal.
The decision enraged the Thackley players who spent the remainder of the half kicking anything in a blue shirt that moved which produced a bad tempered end to the first half.
The two teams club colours of Pickering’s all blue and Thackley’s red shirts and white sleeves made it look like a Chelsea v Arsenal clash, but without the fannying about brand of football or a big daft centre forward falling over as if someone as much as farted next to him.
The winning goal from Thackley’s number 10 had the stamp of a legendary Arsenal number 10. Nicky Matthews picked the ball up 25 yards from goal, weighing up his options before deciding to go it alone, going past three defenders with ease, before coolly slotting the ball wide of the ‘keeper in the style of one Dennis Bergkamp.
Thackley had chances to seal the three points but the Pikes had chances of their own. In the dying minutes Fox had an effort cleared off the line and then in injury time Pickering almost snatched a point, Higginson pulling off a fantastic save from a Aziz shot, tipping his ferocious effort over the bar.
Overall the visitors deserved their win and as a neutral I enjoyed an entertaining encounter. 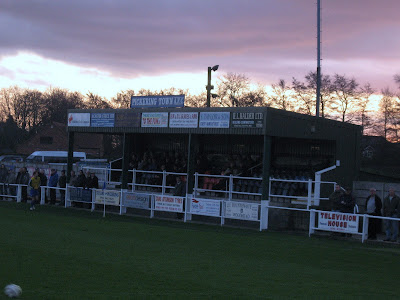 The trip to Ryedale was a pleasant one. After visiting Kirkbymoorside earlier in the day, the short trip along to neighbouring Pickering took less than ten minutes.
The journey back home was another story, travelling through the North York Moors in the dark, not knowing the twist and turns in the road and heading back down Sutton Bank in the pitch black was a life threatening experience!
My driving skills saw me through and once I navigated my way onto the A19 the journey back north flew by, arriving home by 6.30pm, content with the satisfaction of ticking off two new grounds on the same day.