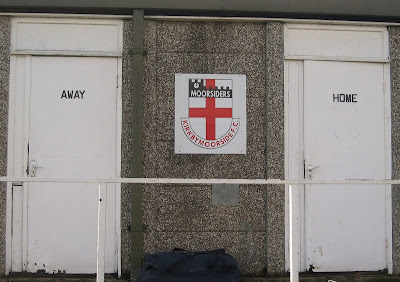 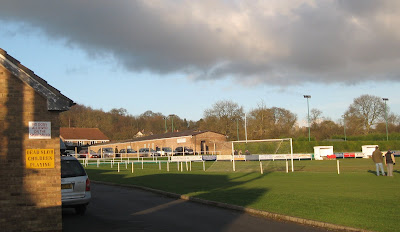 Kirkbymoorside is a small market town in the Ryedale district of North Yorkshire between Helmsley and Pickering and approximately 25 miles north of York.
The town is known locally as Kirby, as there’s a silent K in Kirkbymoorside which I’ve only just discovered, meaning I’ve been spelling it wrong all his time.
The town has a population of 3,000 and recently it became the last town in the country to implement double yellow lines for parking restrictions. 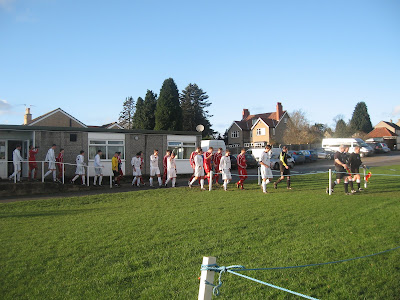 Kirkby Mills is found off the main A170 road. On arrival you are welcoming by three gentlemen taking admission money and selling programmes and pin badges.
The car park is shared with the Bowling Club and Squash Club and is found at the top of the ground. The pitch has a slope which runs down towards the adjacent cricket pitch. At the top of the slope are a pair of white brick dugouts, each having extra bench seats at the front. There’s hard standing behind the dugouts but the popular place to watch the game is the elevated grass verge above.
The clubhouse, home and away changing rooms, refreshment bar and toilets are all within the same building, while the referee and his assistants make use of the facilities in the squash club to get changed.
Work on the ground is still ongoing with the pitch perimeter fence and wooden fencing at the front of the car park still to be finished. 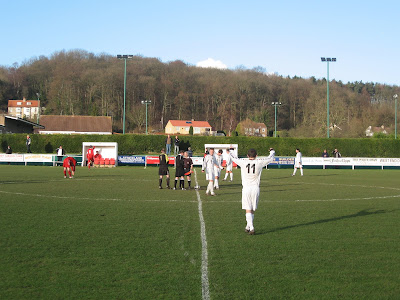 Kirkbymoorside FC having played in the Scarbourgh & District League gained entry to the Wearside League last season after finishing runners-up in the Teesside League in 2007-08, finishing 10th in their debut season.
The club also have a successful reserve team, last season winning the league and another three trophies within the Beckett League.
The Moorsiders were up against Wearside League leaders Ryhope CW in the second round of the League Cup. The two clubs have met recently in the league when the visitors gubbed their hosts with four unanswered goals, today’s game was a lot closer than the score line suggests. 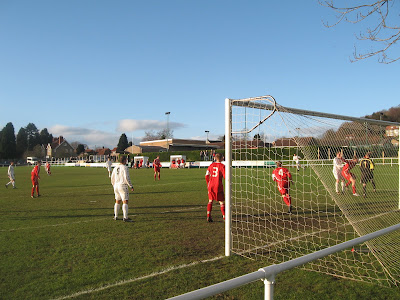 An even first half saw Ryhope looking more likely to score but it was Kirby who had the better chances, young striker Rivas had two good openings, the second of which produced a great save from the ‘keeper.
Ryhope’s best chance of the half fell to Butler, who raced onto a long clearance from the goalkeeper before seeing his right foot shot parried around the post. The Ryhope striker made amends early in the second half to give his side the lead, latching onto a high ball before producing a confident finish from a tight angle.
In the interval I felt if Kirby were to go on and win this tie, then they had to score first, but once they fell behind then it was virtually game over. However it wasn’t until the final five minutes that Ryhope were assured of victory, with a Hodgson own goal and a second from Butler in the final minutes booking a place in the League Cup semi finals.
Ryhope remain top of the league and will be looking to add further honours in the League Cup, a trophy they haven’t won since 1978. Kirby on the other hand are a growing club and just like today’s more experienced opponents, they too may be winning a trophy or two, sooner rather than later. 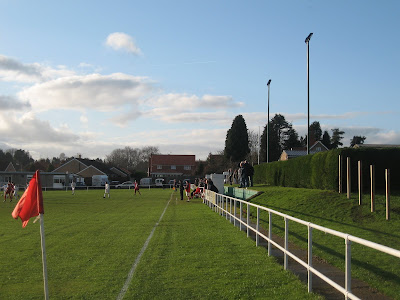 I left behind the fog on the Tyne to glorious winter sunshine in North Yorkshire. I travelled down the A19, then along the A170 through the North York Moors negotiating Sutton Bank, then passing through the picturesque valleys and rivers which eventually leads to the Yorkshire Coast towards Whitby, Robin Hood’s Bay and Scarborough.
I picked out a visit to The Moorsiders when an early kick off coincided with neighbours Pickering Town also being at home, so unfortunately I missed the last quarter of the game to head off a further six miles east for the second leg of my Ryedale double at Mill Lane. 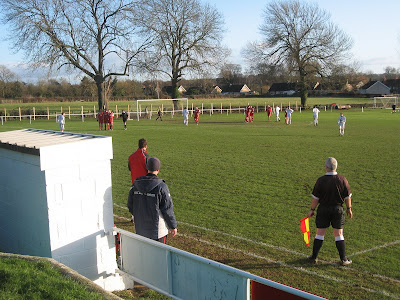