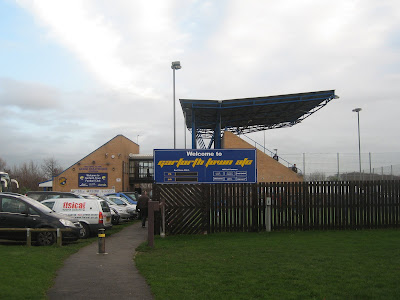 Garforth is a town in West Yorkshire within the City of Leeds. Originally a coal mining area, the town expanded during the 17th and 18th centuries when local landowners the Gascoigne family ran several coalmines in the region.
Garforth is now more of a commuter town, with its close proximity to Leeds city centre with the A1, M1 and M62 motorways close by.

The club originated as a Sunday morning pub team when formed in 1964. The Miners Arms had to play home games on the Welfare Ground in nearby Swillington as there was no pitch available in Garforth.
The team switched to Saturday football in 1976, gaining a place in the West Yorkshire League and acquired a ground of their own in the town, on a former rubbish dump on Brierlands Lane. A small covered stand and changing rooms were build at a cost of £3,000, but further progress was held back because of the refusal of installing floodlights because of nearby houses. (lights were eventually erected in 1995 after a petition to the local council)
In 1978 they accepted a place in the 3rd Division of the Yorkshire League, although a name change to Garforth Miners was required as the league didn’t accept pub teams. The club continued to progress, becoming members of the newly formed Northern Counties East League in 1982 after the merger of the old Midlands and Yorkshire Leagues.
Another name change to the present Garforth Town came in 1985, which coincided with winning promotion from Division 2. The club remained in Division 1 until winning further promotion in 1998 to NCEL Premier Division.
Success in both the League Cup and West Riding Cup followed, as well as relegation and again promotion until finishing runners-up in the Premier Division in 2006-07 which gained entry to the Unibond League.
The Miners finished 10th then last season 16th in Unibond Division 1 North, and regained the West Riding County Cup beating Bradford Park Avenue 5-4 on penalties in the final. 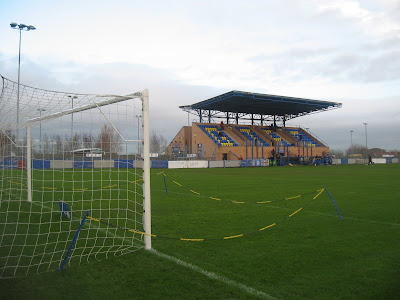 Garforth Town have strong links with the Boys from Brazil, wearing both home and away copycat kits. Ambitious owner and now former team manager Simon Clifford bought the club in 2003, clearing the clubs debts. He introduced Brazilian training methods to the club, as part of his SOCATOTS chain of football academies at both home and worldwide.
Brazilian legend Socrates turned out for the side in 2004, while on a one month loan as a player-coach. His debut against Tadcaster Albion produced a record home crowd of 1,385, former international Careca also adorned the yellow shirt of Garforth in 2005-06.

Garforth moved to their current ground in 1998, originally named Wheatley Park after the ground’s building contactor Michael Wheatley. It has also been known as The Marston's Stadium, as part of a sponsorship deal with the brewery, then from 2006 local dentists Genix Healthcare took over the naming rights.
The ground is a good 15 minute walk from the train station in the middle of a housing estate on the edge of town. The houses were part of the same development as the stadium and are quite posh, some of the owners have giving their homes individual names with the likes of ‘The Ascot’ and ‘The Woburn.’ I can’t really criticise as I wanted to do the same thing with my own house, calling it ‘Gallowgate View’ but unfortunately the breadknife was having none of it and firmly put her foot down on the idea.
The stadium focuses itself around one stand with open hard standing around the other three sides. The main stand is a beauty, originally known as the 'Safer Roads Stand' then renamed ‘The Norman Hebbron Stand’ in honour of the long-serving club president.
The brick built stand has 238 seats, split into four blue sections with the club initials spelt out in yellow within each section. Access to the seats is via staircases at the back of the stand. Below is a standing paddock behind the team dugouts and the stand is topped off with a distinctive elevated roof.
The clubhouse is called the Mineiros Bar and is decorated with Brazilian football memorabilia including framed signed shirts from Ronaldo and Romario. In between the bar and stand is another room used by club officials for hospitality purposes which forms a bridge between both structures. 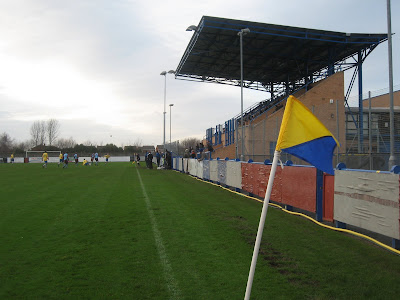 Colwyn Bay went joint top of Unibond Division 1 North with three goals in a four minutes burst in the opening quarter of an hour.
They took the lead in the 11th minute, a free kick from the edge of the box was slammed home by Eddie Jebb, his shot finding the postage stamp frame of the goal.
Minutes later Jebb’s corner kick was nodded home at the near post by Ian Sheridan, then the same two players linked up again, Jebb’s cross found the unmarked Sheridan, leaving him with an easy finish.
Sheridan completed his hat-trick before half time, managing to stay onside before racing through on goal and finishing like a natural striker. Sheridan usually plays in midfield for the Seasiders and was playing as a centre forward for the first time. After this outstanding first half performance I’m sure it won’t be his last in a number nine shirt.
Garforth produced a plucky second half performance. They had nothing to lose so they give it a good go with a spirited display with left winger Chris Ovington and top scorer Tom Greaves looking impressive for The Miners. They were rewarded with two late goals which made the score look more respectable. Greaves scored both, the first after latching on the a long ball from the keeper and in the final minute showed good skill to go past the defender and finished well.
This win put Colwyn Bay level on points with Curzon Ashton at the top, but the Welshmen have a game in hand and look good bet for the league title. 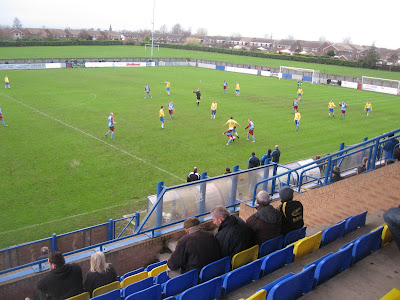 I took advantage of a special offer of £6 train tickets to York to pay a visit to the West Yorkshire Brazil. The train journey from York to Garforth is less than 15 minutes away, so after leaving Newcastle at 11.30 and stopping off for in York for a beer break, I arrived in Garforth by 1.15pm.
A quite enjoyable day out which was topped off with a very entertaining match. Whilst in town I naturally stopped off for a few drinks, visiting the pub where the club originated from; the Miners Arms as well as having a Speckled Hen in the Gaping Goose! Which is, in case you don’t know, a quality pint of beer served in one of Garforth’s best pubs and not as it sounds - some kind of poultry porn!