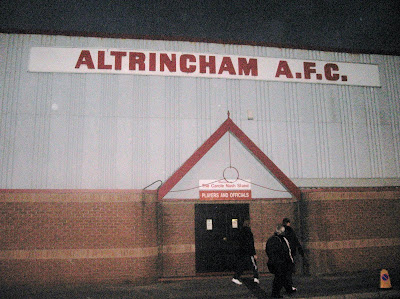 Altrincham is a market town in Greater Manchester within the Metropolitan Borough of Trafford. The town is quite posh, with a strong middle class populace which stems back to the 19th century. Today’s residents including the likes of Premier League footballers and the cast of Corrie. Nowadays it's became a commuter town, with the neighbouring Bowden and Hale make the area the stockbroker belt of Manc. 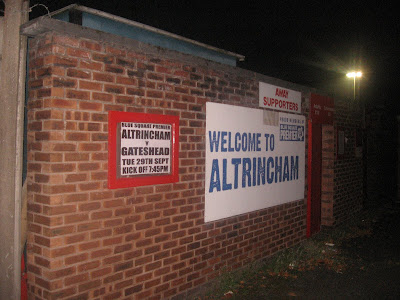 Altrincham formed as Broadheath FC in 1891, becoming founder members of the Manchester League, changing their name to Altrincham FC in 1903.
In 1910 the club moved from Pollitt‘s Field to Moss Lane, which was originally part an area of common land known as Hale Moss.
The following year the club joined the Lancashire Combination, a league they played in for eight years until becoming founder members of the Cheshire County League in 1919.
The Robins spent almost 50 years in the Cheshire League, but it wasn’t until the mid-sixties that they finally became champions. Back to back titles followed by and a runners-up spot saw the club join the newly formed Northern Premier League in 1968.
Altrincham must be one of the most unfortunate clubs in Non-League football. The club finished runners-up in the Northern Premier League in 1978-79, which made them one of the original clubs in the newly formed Alliance Premier League (Conference)
The Robins won the first two Alliance titles, twice narrowly missed out on election to the Football League. In 1980 a solitary vote denied them a place in League Division Four. They came so close to becoming a League club and since automatic promotion was established in 1987 they haven’t finished amongst the promotion pack.
The club were relegated back to the Northern Premier League in 1997, spending the following few years jumping between the leagues until the 2004 reconstruction placed them in the Conference North.
Alty returned to the Conference National winning the old North v South final in 2005 beating Eastbourne Borough at the Britannia Stadium. Since returning to the top division the club have been lucky to remain in the league, the financial misfortune of others clubs has seen them saved from the drop over three consecutive seasons.
Altrincham have enjoyed success in the FA Trophy with Alty fans taking the walk up Wembley Way on three occasions. Winning the trophy in 1978 against Leatherhead, in 1986 over Runcorn, and losing out to Enfield in 1982.
They are also the biggest giant killers in FA Cup history, knocking out Football League opposition a record 16 times. The biggest scalp of all was top flight Birmingham City in 1986.
Their most famous celebrity fan is old papier-mache nappa himself - The Bard of Timperley -Frank Sidebotton and earlier this season Aussie cricket captain Ricky Ponting became a shareholder in the club after becoming pals with Altrincham chairman Geoff Goodwin. 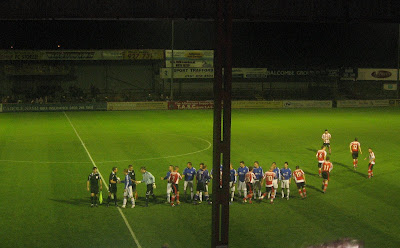 I again used the excellent Torchy Travel executive Heed tours for my trip to Altrincham.
The only change to the line up which travelled to Kettering three weeks ago was Old Goat came in to the central back seat position, replacing Kav, unavailable due to work commitments.

Moss Lane is a classic homely Non-League ground. The main facilities are all located at one side of the ground. The Carole Nash Insurance Stand is a tall single tier, decked out in red seats with glass windshields and a few narrow supporting pillars. At one side there’s the Goodwin Family Stand, which is a smaller separate stand. The club shop, refreshment bar and a block of terrace steps are at the other side, along with the entrance to the Noel White Suite which is situated under the stand.
The Popular Side is a long terrace which runs pitch length which is mostly covered, the middle section has a higher roof which accommodates the TV gantry.
The Golf Road End is a covered terrace with red crash barriers which runs at a slight angle at each side, making the section behind the goal much wider.
The Hale End is an open terrace which is allocated to away fans, but with the Heed Army masses making up only 13 of the 769 in attendance, then no segregation was in place leaving the Alty fans free to use the terrace when their team kicked towards that end in the second half. 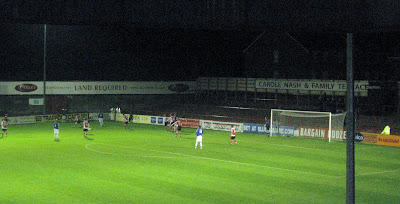 Two goals in stoppage time denied Gateshead a much needed away victory with a hotly disputed penalty giving all three points to the Robins.
The game bust into life with a goal after only 80 seconds. A defensive clearance fell into the path of Anthony Danylyk, who struck a sweet half volley from the edge of the penalty area which flew past the keeper’s right hand post.
The lead lasted only four minutes, Gateshead’s first venture forward saw a well hit Turnbull shot parried by keeper Coburn into the path of Graeme Armstrong. who had the simple task of netting the rebound home from close range.
After such a positive start to the game, the remainder of the first half was a scrappy affair. Both teams failing to find any rhythm, giving possession away cheaply. The home side produced more goal attempts, although nowhere near the target.
Altrincham looked more likely to take the lead in second half. Good wing play from Doughty on the right, should have been rewarded with a goal and then Sheridan went close with a free kick which was deflective over the crossbar.
On 68 minutes Gateshead took to lead with their first effort of the second half. A good ball from Francis found the overlapping Baxter, his cross to the statuesque One was nodded away by a defender, the ball then fell kindly to Turnbull, who struck a well hit drive under the diving keeper’s body from the edge of the area.
After using all their substitutes Gateshead were reduced to ten men after an injury to Richardson with five minutes remaining. This seemed to cause mass panic and a backs to the wall rearguard as the Heed tried to hang on for the three points.
A head injury to Altrincham’s Aaron Burns in stoppage time meant further time to be added to the allotted four minutes. Play resumed with a corner kick which was nodded home by the unmarked Chris Denham at the near post, the Gateshead defence losing concentration after the long delay.
Just as it looked like a great away win had turned into a well earned draw for The Tynesiders, things got worse. A penalty in the 6th minute of stoppage time was awarded for.. well to be honest I’m still not quite sure. Gateshead keeper Farman came out to collect a loose ball and as he gathered the ball the oncoming striker appeared to catch him in the chest with his boot before falling over. A free kick to the keeper, no a penalty kick! Even the Altrincham fans were flabbergasted at the decision. Apparently there was a foul by Curtis on Senior prior to that incident and that's the reason for the spot kick, but again it was a case of - what foul?
Anyway Matt Doughty made no mistake with the penalty and proceeded to do a lap of honour of Moss Lane in celebration.
A good win for Alty which took them into the top half of the table and only a few points off the play-offs. While it’s six defeats out of seven on the road for The Tynesiders, a record which will have to be vastly improved or our stay in the Conference will be a brief one season guest appearance.

My collegue in the press box - Jeff Bowron; respected journalist from the Chronicle and The Journal,watching a DVD of the game on the team coach on the way home from the game.
It was a STONEWALL penalty after a foul by Curtis. So my full apologies to the referee for questioning his decision. Oh.. and well done!