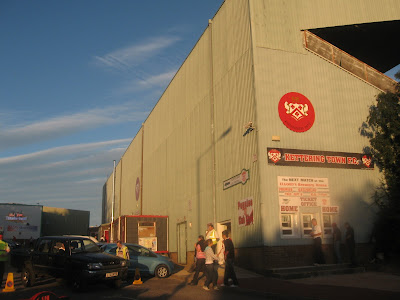 Kettering in a town on the River Ise in the East Midlands. The town grew as part of the Northamptonshire boot and shoe industry, which became an integral part in Kettering’s economy in the 19th century. The town was built up with new homes in Newlands and Rockingham Road for the factories owners, with terraced streets built to accommodate the workers.
Kettering FC formed in 1872, originally playing in the Midland League, winning two league titles before progressing to the Southern League at the turn of the 20th century.
Town was adding to the club name in 1924 and over the next five years finished runners-up and twice winners of the leagues East section, and overall champions in 1927-28.
Over the next two decades the Poppies played in the East Midlands League and the Birmingham & District League, adding more league honours in both competitions before returning to the Southern League in 1950.
Tommy Lawton guided Kettering to another league title in 1957, then a third success, this time under the leadership of Big Ron (jingle-jangle)Atkinson in 1973.
A Wembley appearance in the FA Trophy in 1979, losing 2-0 to Stafford Rangers in the final, was then followed by the club becoming founder members of the Football Alliance in the same year.
The club established themselves as one of the leading clubs in Non-League’s top league, although top position has eluded them four times, finishing runners up on two occasions twice in both the eighties and nineties.
The new millennium started well with another trip to Wembley, but a narrow defeat to Kingstonian denied the Poppies a chance to get their hands on the FA Trophy.
The following season the club were relegated from the Conference for the first time in over 30 years of top flight Non-League football.
Over the following seasons the club were promoted and again relegated, playing in the Southern League then the Ryman League, where a ninth place finish was enough the ensure a spot in the newly formed Conference North.
After previously missing out via the play-offs, they returned to the Conference when winning the North title in 2007-08 with a record 97 points tally. 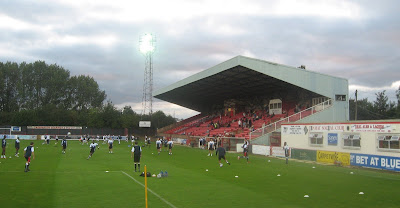 The club originally played on George Eldred’s Field until 1894 when they moved to North Park until residing at Rockingham Road from 1897.
Built in 1972, the Main Stand is a large cantilever structure with a capacity of 1,747 red seats, as well as a model owl sitting in the roof to frighten off the pigeons. The stand is nearer the Rockingham Road end, the space at the other side is taking up by the Tin Hat Social Club, sponsors lounge and disabled area. The press area is in the corner of the stand but gives a central view due to the stands position.
The Britannia Road Terrace has cover running almost pitch length, the roof is set back giving shelter to those standing at the rear. There’s also a TV gantry which would be hard to spot if it wasn’t for the TV screen lit up inside and the big McDonalds logo on its wall.
There is open terraces behind each goal. Away supporters are allocated the Rockingham Road End which is smaller terrace with no steps, this replaced the old popular covered Tin Hat end. Large away followings are also allocated a section of the Main Stand.
The Cowper Street End is a larger terrace, with a large walkway at the top and steps below.
A feature of Rockingham Road is the four floodlights pylons which each form the letter K within the bulbs. The first club to do such a thing, way before di Villa with their A and V.
The ground was named the A-Line Arena, but recently became the Elgoods Brewery Arena(quality ales) and now has an overall capacity of 6,264. 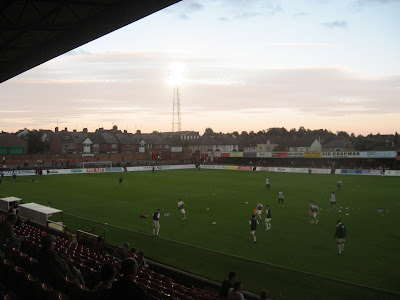 Kettering have made a good start to the season, while Gateshead have struggled to adapt to life in the Blue Sq. Premier.
Of all the steps which run up the football pyramid ladder, the step between Conference North/South and Conference National must be the steepest step of all.
It’s a massive gap to overcome and we now realise the huge task ahead, so we could be in for a very long hard winter.
Kettering started the game brightly, going close through Spencer and Roper before opened the scoring after only ten minutes. A corner kick from the right eventually fell to Danny Thomas lurking on the edge of the box, he drilled his left foot volley into the ground, which bounced directly above Provett and into the roof of the net.
Provett made amends for his error minutes later, making a superb double save to deny Green who looked odds on to score.
Gateshead then enjoyed a good spell of pressure but lacked that cutting edge up front, with new signing Armando One having their best effort with a close range header.
Kettering’s pacey forward three of Thomas, Green and Ashikodi led the Heed defence a merry dance all evening and it was Moses Ashikodi who doubled the lead on 32 minutes. A fine through ball from Boucaud allowed the striker a free run and shot on goal after Robinson’s misjudgement had played him onside.
It was a case of how many more would the Poppies add to their goal tally in the second half. Thankfully for a Geordie sitting in a stand full of goal hungry Kettering fans, there was just two more to report.
Kettering’s third goal was of similar fashion to their second. This time it was Francis Green who took advantage of a square Gateshead defence, latching on to a through ball before producing a low hard shot past Provett.
The rout was completed ten minutes from time. A free kick wide on the edge of the penalty area was nodded home unchallenged by Damian Spencer. A goal which summed up the game perfectly - so easy for Kettering.
Gateshead just weren’t at the races at all, but let's not take anything away from Kettering. They look a very good side with a lot of pace in attack and two classy defenders in Roper and the coolly named Exodus Geohaghon.
The win took them into second place in the Blue Sq. Premier and if they continue with good performances like this, we may see them in a play-off spot come the end of April. 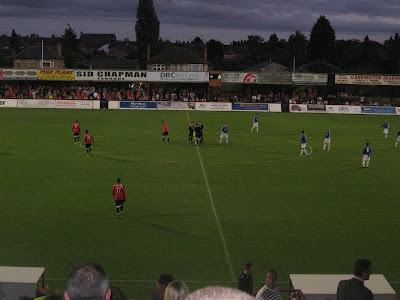 The long midweek journey to Kettering was made with 100FGC squad#51 John Young aka ‘Torchy Travel’ along with Kav, Simon Heed Groundsman(who also does a spot of gravedigger and has a hatred of red traffic lights) and 100FGC squad#26 Alan Price, all making our debuts at Rockingham Road.
On arrival we headed to the Tin Hat Social Club which has a
good selection of beer on offer, including five hand pumps, with a selection from the stadium sponsors Elgood Brewery. along with quality German beer Warsteiner (if that‘s what wets your whistle)
Midweek fixtures in this league are supposed to be reserved for matches with clubs who are located closest, to minimise travel, but arriving back home at 2.15am somewhat dispels that theory.
Feeling disappointed in the performance and result, I was still glad to have visited an old non league ground like Rockingham Road. It’s also gained me some valuable Torchy credit miles, which gives me a good chance of again booking a seat in John’s car on future away trips.
The Groundhog’s visit v AFC Wimbeldon last month. 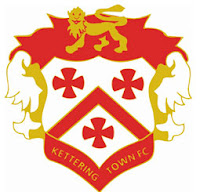 Nice!
Torchey has sold out to his real fans though.... FACT!

Real fans travel all the way to Kettering on a Tuesday night...TRUE FACT!

THREE pounds for a Conference programme? Credit Crunch eat your heart out!