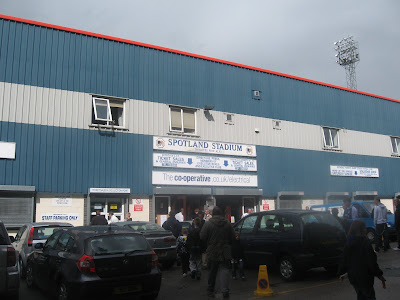 Rochdale is a large market and former mill town in Greater Manchester. The town lies in the valley of the River Roch, amongst the foothills of the Pennines to the east and Rossendale Hills to the north.
Rochdale came to prominence as a centre of the north’s woollen trade. Then in the late 19th century became one of the first industrialised towns, a major textile manufacturer during the industrial revolution. The Rochdale Canal was one of the country’s major broad canals, used to haulage the importing and exporting of coal, wool and cotton.
The town has a few influential musicians in its time. Gracie Fields to Lisa Stansfield, The Chameleons to The Mock Turtles. However the greatest musical link must surely be comedian Mike Harding with his Top 30 hit the ‘Rochdale Cowboy’ 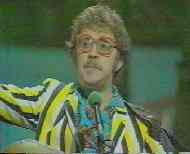 It's hard being a cowboy in Rochdale,
Spurs don't fit right on me clogs,
Yee-haa
It's hard being a cowboy in Rochdale,
'Cause people laugh when I ride past on our Alsatian dog.
[lyrics - M Harding -peaked at #22 in the Hit Parade in August 1975]
The ground was originally named St.Clements playing fields after the nearby church, initially used for cricket and then from 1878 by the local rugby club.
Football was first played at the ground in 1900. The original Rochdale AFC and Rochdale Town both played there for one season, but with little success until Rochdale’s current football club were especially formed to take over St. Clements in 1907.
Once established Rochdale AFC were accepted into the Manchester League, then the Lancashire League the following year. In 1910 they became a limited company, which enabled the club to purchase the ground’s tenure for £1,700 in 1914.
The ground was known as Spotland by the time Rochdale became members of the Football League in 1921. A wooden main stand was then erected at the south side, followed by terraces on Willbutts Lane and the Pearl Street end.
An early feature of the ground was the infamous five foot slope which ran down towards Sandy Lane. This was finally levelled in 1948, with the surplus earth pushed towards the Pearl Street End to make a miniature ‘Spion Kop’. Crash barriers were added to the terrace and the following year the ground witnessed its record attendance of 24,231 for an FA Cup tie against Notts. County.
The original Main Stand took a bit of a hiding in its time. In 1921 gale force winds blew the roof down, in 1953 it was partly destroyed by fire, then in 1966 the roof caved in again after a heavy snow storm.
Spotland was lit up for the first time in February 1954 for a friendly against St. Mirren. This was the grounds first set of floodlights, being replaced in 1971 and then again in 1992.
Rochdale Hornets (one of the original 22 Rugby League clubs formed in 1895) returned to there previous home after an 88 year absence to ground share with The Dale, after selling the Athletics Ground to developers for £2.6 million. Both clubs linked up with the local council in a joint ownership, which helped finance much needed work after the Taylor Report.
After the joint co-operative the ground was re-branded as Denehurst Park Stadium, named after the public park which is found on Sandy Lane, the new name never caught the locals imagination and so the Spotland name remained. 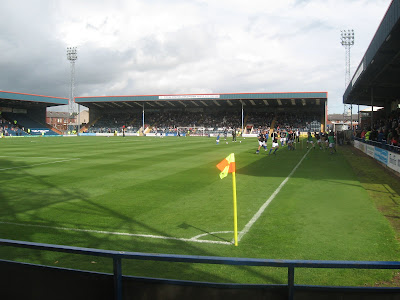 The first major work which gives us the Spotland stadium that we know today, was replacing the tattered and torn old Main stand. It was replaced in 1992 at a total cost of £1.2 million. The stand has a capacity of 1774, made up of alternated sections of red and blue seats. There’s 12 executive boxes situated in the centre and a small press area.
The only standing section is on Sandy Lane. The terrace has a capacity of 1900 and is now known as the Thwaites Stand. Apart from the odd supporting pillar the view is excellent and great value for money, priced at only £14.
The T.D.S. Stand on Pearl Street was officially opened in September 1997 by Sir Nat Lofthouse. It has a capacity of 2,584 blue seats with Dale picked out in white. It also has the Studds Bar in the stand where you can get a drink at half time and during the game.
Wilbutt Lane Stand completed the new look Spotland Stadium in 2001. It’s now known as the Westrose Leisure Stand and is similar in appearance to the Pearl Street end, it holds 3,560 blue seats with Rochdale picked in white. The stand is set aside for away supporters and also houses the TV gantry . 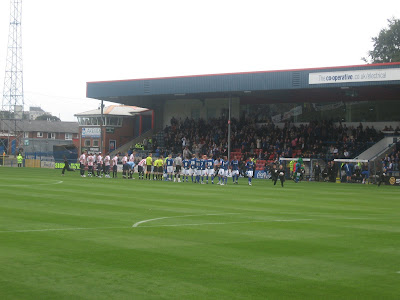 I arrived into town at 12.15pm, calling for a few pints in the Regal Moon and the Cemetery Hotel before reaching Spotland at 2.15pm. After walking the perimeter of the ground, securing a programme and pin badge, I had time for another pint in the Radcliffe Arms which is located in the car park at the stadium’s main entrance.
I stood on the Sandy Lane terrace with Dan(100FGC#93) and Sam(100FGC#139) who unfortunately arrived late, getting to Rochdale just prior to kick-off due to heavy bank holiday traffic.
The PA sound system in the stand was at full blast, turned right up to the maximum 11. They only played music from Manchester bands, like Oasis and in particular Happy Mondays and Stone Roses, it was like being transported back to 1990 with the sound of Madchester.
Matches against Bury are ‘a bit of a do’ around these parts. Local hostilities were prominent throughout, especially in the first half with both sets of fans swapping the usual insults, then the police had the intervene after 25 minutes when things got a little bit out of hand.
We had the misfortune to be standing next to the local headcase. When I saw him standing in front of us, I thought he was about 18-19 years old, judging by his size, physique and the charva clobber he was wearing. When he eventually stopped hurling abuse and flicking the v’s towards the Bury fans and turned around, I couldn’t believe he was actually a 50 year old (at least) gadgey! 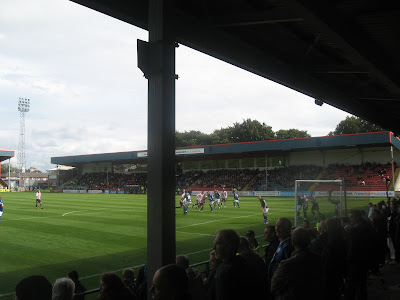 The first half of this derby was a non event. No clear cut chance carved out by either side, the match dominated by fouls. It was like a playground schoolboy game, everyone running around like headless chickens wanting the ball ,then doing nowt once they received it.
Rochdale took a foothold on the game in the second half, taking the game to their opponents and finally applying some pressure on the Bury defence.
The breakthrough arrived just before the hour mark. A decent cross from the left by Buckley found the unmarked Thompson, his shot taking a slight deflection on its way to goal.
Man of the Match Chris Dagnall had missed a great chance early in the second half to open the scoring when one-on -one with the goalkeeper. In the 72nd minute a similar opportunity arose and this time he took his chance well with a confident finish.
The victory was rubber stamped with ten minutes remaining, when Buckley was barged over by Sodje in the penalty area. Kennedy despatched the spot kick then proceeded to ‘milk it’ in front of the away end which really winded up the Bury fans. One irate supporter then ran on the pitch, looking like he wanted to lynch him, the goalscorer ending up having to leg it from the incensed fan.
The traditional main rivals for these two sides are respectively Oldham and Bolton, but with both clubs not playing their most hated over recent years, then this fixture has taking over as their local derby. In the end it was a convincing win for The Dale, their first over Bury at Spotland for 16 years, so the local bragging rights well earned until the clubs meet again in the new year.
After the game I did my own version of penalty taker Tom Kennedy, legging it back to the train station to catch the 1720 to Leeds. Catching the earlier train gave me a good half an hour before my connection train to Newcastle, thus giving me time for my first visit to the Wetherspoons situated inside Leeds Station.
It was 2030 as my train crossed the King Edward bridge, arriving back home after a pleasant day out in Lancashire where I saw and met some interesting people, but unfortunately I failed to witness anyone in a cowboy hat riding around on an Alsatian dog!

My sister-in-law has been a season ticket holder here for years, great ground and they make a vey good pie as well!

Mike Harding is from Crumpsall in Manchester and not from Rochdale!The only other Rochdalian to have made records is Paul Stevens(ex lead singer with Banshees from Belfast who recorded "Yes Indeed" on Columbia at Abbey Road Studio 2(Beatles Studio!)in 1965.He also had a minor hit as lead singer with Australian group:The Gibsons in 1967 with :Magic Book"on Deram(Decca),penned by Greenaway and Cook and went on to record further releases on Major Minor Records with them before releasing his first solo single on Page One Records in 1968 called "Sometimes You Love Me"before releasing "Dying To Live With You"in Australia in 1975 He is also one of Rochdales longest serving supporters for over 70 years!First game at Spotland in late 1940s against Leeds United(featuring John Charles!)in FA Cup match(Date and attendance please?) He is my father! www.craftweb.org/web/paulstevens and also: www.caddielegend.mysite.com