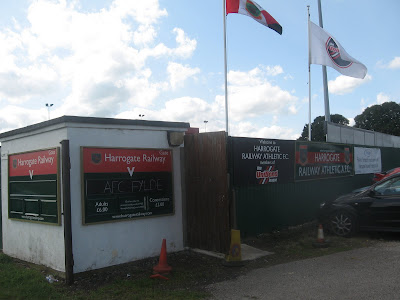 Harrogate is a spa town in North Yorkshire, originating in the 17th century from two small villages; High Harrogate and Low Harrogate in the Nidd Valley.
The towns first mineral spring was discovered in 1571 by William Slingsby, water from the Tewitt well containing iron, sulphur and common salt.
The chalybeate properties in the water were a popular health remedy, encouraging wealthy ailing visitors to the town, a major contribution towards the town‘s wealth.
Harrogate hosts the Great Yorkshire Show every year and once hosted the not so great show. In 1982 the town’s conference centre staged the Eurovision Song Contest, which was won, as you may expect when England are at home, by the Germans!
(That’s ‘A Little Piece’ by Nicole…Eddy)

As the name suggests, Harrogate Railway Athletics were formed in 1935 by rail workers from the Starbeck LNER depot.
After winning the British Railways National Cup in 1946, the club borrowed £1,500 from the LNER to buy their Station View home. A weekly payment of 1d a week from 300 rail workers was more than enough to secure the loan.
Competitive league football began in 1955, joining the Second Division of the Yorkshire League. They won promotion in their third season but yo-yo’d between the two leagues during the fifties and sixties.
Athletic struggled through the 1970’s. Relegation to the newly formed Yorkshire League 3rd Division was followed by dropping into the Harrogate League in 1973.
In 1980 with the club financially stable they returned to the Yorkshire League, then became founder members of the Northern East Counties League two years later.
By 1987 they reached its Premier league for the first time, playing for six seasons before relegation, but they returned as Division One champions in 1998-99.
Station View hosted its biggest match in 2002, Sky TV screened their second round FA Cup tie with Bristol City, as they became the lowest ranked side to ever reach this stage of the competition.
Three temporary stands were erected with the club determined to host the biggest game in their history. A sell out crowd of 3,500 witnessed a brave effort from Railway, eventually losing out 3-1 to the League One side.
A third place finish in the 2005-06 season was enough to clinch promotion to the Unibond, The club adapted well to life at a highest level, which coincided with another fine FA cup run. They overcame local rivals Harrogate Town on the way to again battling their way to the second round proper.
The home tie with League Two side Mansfield Town was broadcast live, this time on the Beeb. Unfortunately the Railway narrowly missing out on a place in the third round, going down 3-2 on a very clarty Station View pitch. 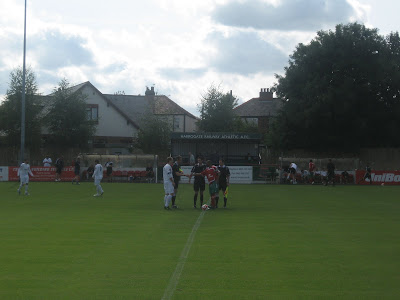 I travelled down the A1 to North Yorkshire with Alan Price(100FGCsquad#26) the 75 mile journey taking around an hour and twenty minutes.
Station View is found 2 miles west of Harrogate in Starbeck, on the main Knaresborough Road which leads into the town.
The village has an array of shops and takeaways, amongst them is a Butcher - who must be the greatest sausage maker on the planet! He’s won more honours than Ryan Giggs, with his list of titles shown on the shop window and walls. Alan gave into temptation, purchasing some of his casings of spicy meat goods, so he’ll be able to judge for himself.(Good bangers Alan?…Eddy)
That old phrase ‘red and green should never be seen except upon an Irish queen’ is disregarded at Harrogate Railway. Not only is it the club colours but the ground is decorated throughout with a clash of these two primary shades.
Once you’ve entered the turnstile and gave the young lass a quid for a golden goal ticket, you’ll find all the amenities at the station end of the ground.
Pitch side there’s portakabins used for club shop and media room with the changing rooms and ‘The Railway Buffet’ canteen set further back across the staff car park. There’s also a separate cabin used as offices for directors and club officials and in the far corner of the car park, amongst the weeds and debris are male and female toilets.
The main stand is behind the far goal, which is split between seats and standing. There’s approximately 300 red flip seats which includes a separate section for club directors. The terrace has five steps which tapers off to a point at its edge with conregated iron roof and back walls in those loud club colours.
There’s a small stand at the far side, parallel with the half way line in between the dugouts. This stand is in named in honour of ex player, junior coach and committee man Shaun Glennon. The stand has dark green flip seats and matching facia, adorning the stand and club name.
The rest of the ground is open half standing which includes a raised section of terracing next to the Shaun Glennon Stand.
Floodlights were installed in 1991, four pylons with twin lamps on either side of the pitch. They were first switched on for a friendly with Sheffield United in March of that year.

After being treated to the pre-match sound of Beaver FM on the PA, it was time for the main attraction; The Rail taking on Vodak Premier Division Champions AFC Fylde for the very first time in the Unibond 1st Division North.
The game started scrappy, with the match unable to flow. There were too many cheap free kicks conceded, with the players more concerned with winding each other up and questioning every decision made by the referee.
The match was desperately in need of a goal and when it came what a cracker it was.
Liam Richardson received the ball on the left, then from the edge of the box unleashed a fierce shot which swerved around the keepers left hand and crept into the far corner of the net.
This gave the Rail a lift and they doubled their advantage just before half time. The ball falling kindly to Ben Jones in the penalty area, then with his back to goal turned and volleyed past the helpless keeper. He smacked the ball so hard that the ball bounced back off the advertising board behind the goal, then back into play, so maybe if this was Crystal Palace it mightn’t have counted.
Fylde improved in the second half, getting back into the game on 54 minutes after a clear cut penalty was converted confidently by Joe Booth.
The match was finely balanced in the last half hour, with the visitors looking more likely to go back over the Pennines with a draw, with the Rail trying to secure the three points by catching them on the break.
In the 67th minute Fylde substitute Walwyn beat the offside trap before running to the edge of the box and squaring the ball to Watt, who agonisingly saw his shot bounce off the foot of the post before being cleared.
Harrogate added to the away sides frustrations by defending well and time wasting at every opportunity. Then in stoppage time a great chance to equalise. Walwyn was clear through on goal with only the keeper to beat, but the big goalie made himself even bigger, blocking the strikers attempted lob, which proved to be the moment which gave the hosts all three points. 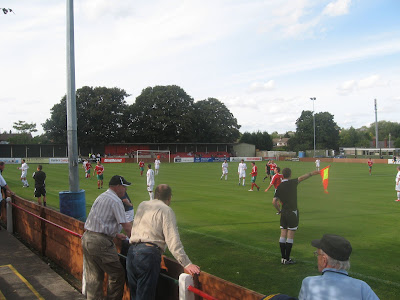 Overall an enjoyable day in sunny Harrogate, the match was competitive and quite entertaining. Station View is well worth a visit, handly placed in between Harrogate town centre and picturesque Knaresborough. Plus if your planning to travel by train then you can't get a much closer ground to the station.
I mustn't forget to mention the score updates I received via text message throughout the day, which also contributed to a great football afternoon. (two away wins 4-1 and 2-0)