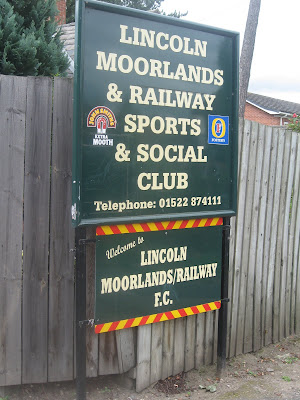 Lincoln Moorlands FC were formed in 1989, beginning in the Central Midland League Premier Division followed by a season in the North section when the league was regionalised in 1991.
The following year the club were forced to leave the league when minimum ground grading was brought into the CML. The Moors received financial backing of £1,500 to complete the required work and submitted plans to the league, but the club were still booted out and left without a league to play in.
Thankfully they were accepted into the Lincoln & District Football League, where they played for one season before joining the Lincolnshire League in 1993.
The 1998-99 season was a successful one, they rejoined the CML Premier Division and won the title at the first attempt, winning 26 and drawing 2 out of the 28 games.
Success continued the following season winning the CML Supreme Division, then after missing out on the title on goal difference the following year, the club were still able to gain acceptance into the Northern Counties East League.
The merger with Lincoln Railway coincided with their first season in the NECL Premier Division in 2007, where they’ve remained since, although they have flirted with relegation over the last two seasons.
Over the last 30 years the Moors have won honours in county cup competitions. Having the distinction of playing in six consecutive finals between 1996-97 and 2001-02. 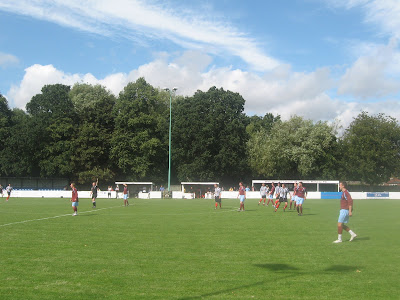 Moorland Sports Ground is located on Newark Road, one of the main roads which leads into Lincoln city centre, just over 2 miles from the High Street.
The welcome sign is easy to spot, at the top of a narrow lane off the busy road. The impressive social club is found at the bottom of a spacious car park and the ground entrance is gained through a single turnstile block on the left hand side.
The ground is quite roomy, with lawns on all sides behind the stands and goals. You enter the ground behind the left corner of the goal. There is three separate buildings to your right, changing rooms, toilets and Carol’s cabin; which serves a good selection of hot drinks and sandwiches.
On the nearside is a small wooden stand with green and white frames and supports, it houses 50 seats and accommodates a disabled area.
The far side has two stands to each side of the dugouts. There’s one of those Meccano ready kit stands, which has 100 blue seats and at the other side is a standing shelter with ‘Welcome to Lincoln Moorlands Railway FC’ across its fascia.
There’s hard standing behind each goal and the ground is fully enclosed with a line of trees in between the neighbouring houses.
Moorland Railway could have had this FA Cup tie with Eastern Counties League outfit St Andrews put to bed within the first 20 minutes. Good opportunities were wasted, players looking to go for glory themselves, wasting good chances instead of using the option of an unmarked team mate.
They did eventually take the lead after half an hour through Ben Garrick, but were pegged bag almost immediately when a cross was touched home by Aaron Preston.
Moors looked a good bet to progress into the next round, regained their advantage on the stroke of half time. Garrick adding his second goal of the afternoon, shooting past the keeper from close range as St. Andrews appealed in vain for offside.
The second half was a different tale altogether. St Andrews dominated proceedings. Equalising in the 56th minutes with a brutal left foot shot from Preston. Ten minutes later he completing his hat trick, St Andrews broke up a Moors attack, catching them on the break before Preston made room for himself to shoot inside the penalty area with a good finish.
As the game progressed Moors looked more unlikely to force a replay with St Andrews seeing the game out comfortably to book a place in the Preliminary Round away to Winterton Rangers in a fortnights time. 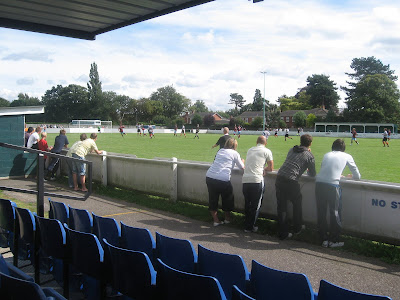 I called into Lincoln on my way to a very enjoyable weekend in Skegness. The Smudgers having a well earned break on the Lincolnshire coast. I watched the game with Lincoln based Man Citeh fan Jim Morris (100FGC squad#86) who last week attended the first competitive match at the new Cardiff City Stadium and he had kindly purchasing a programme for me from that day.
We were both impressed with The Moors cosy set up and pleasant surroundings. I was surprised to learn that Jim hadn’t visited Moors before, even though it’s the closest ground to his home, although he’s vowed to return in the future. As for myself I was pleased to tick off Moorland Sports Ground, as previous visits to the city at both United and The Imps meant The Moors have now completed a Lincoln hat-trick. 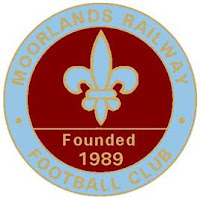 100groundsclub.blogspot.com; You saved my day again.