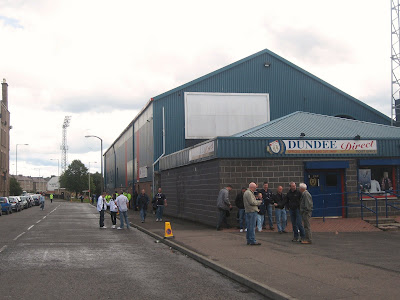 Dundee is the fourth largest city in Scotland, situated on the north bank of the Firth of Tay by the North Sea.
Dundee isn’t just renowned for giving its name to an almond covered fruit cake, it was giving the nickname of the city of “jam, jute and journalism”
Dundee’s major industry was in the wool trade, the city port thrived as weavers turned there hand to weaving imported jute with many of the city’s workers employed in the jute mills and associated industries.
The city is also the home of the publishing firm DC Thompson, who produce a selection of newspapers including the home of Oor Wullie and The Broons - The Sunday Post as well as more serious publications; The Beano and Dandy.
The jam link is in recognition of Janet Keiller’s first commercial brand of marmalade. Her 1797 recipe was mass produced and exported worldwide, with jars of Keillers marmalade still widely available today.
However a more important fact for my reader is the city is one of only three in Britain to have two clubs reach the Semi Final of the European Cup.
Dundee FC formed in 1893 with the marriage of two clubs; Dundee Our Boys and Dundee East End, joining the Scottish Football League in the same year.
They originally playing at Carolina Park for five years until moving into the neighbourhood of the city’s other football club Dundee Wanderers, who played at nearby Clepington Park.
The ground was redeveloped when in 1919 when the club purchased the site for £5,000. A two-tier main stand with terracing on three sides was completed in two years, at a cost of £60,000.
In 1959 a roof was erected on the south side with floodlights added the following year. More cover was added on the west side after the club enjoyed their first venture into Europe in the early 1960’s.
The Safety of Sports Ground Act in 1975 saw the ground capacity halved to 22,000 by 1980. Replacing the terracing with bench seats installed on the south and west terraces.
The South Stand still has blue bench seats with DFC picked out in white. There is also old terracing still visible on the open sections on either side of the cover.
The ground stagnated over the years until 1994 when the Main Stand was refurbished as Dens Park began staging greyhound racing, for the first time since the 1930’s.
To a football ground connoisseur like myself, this stand is a classic. The interior roof with it’s metal beams and supports has the look of a Victorian train station The shiny red beams with a mixture of red and blue seats make it pleasing on the eye. After the game I photographed the stand from the Bobby Cox stand where the stand looks even better with its blue roof and red frames. At the front are sections of paddock seating with a paved area where the oval track would have once encroached the stand.
The press area was at the back row with the middle of the stand giving the furthest viewpoint due to its oval shape.
The ground was redeveloped as part of the SPL all seated ground criteria after promotion in 1999. The East and West Stand’s were constructed by Barr Stadium Construction in only 82 days. Both single tier stands hold 3,000 customers, named after Dens legends Bobby Cox and Bob Shankly, the latter is the away end both have Dundee picked out in white amongst dark blue seats. The players enter the pitch via the Main Stand/Bob Shankly corner.
Throughout the years there’s been talk of ground sharing with United, a new purpose built stadium has been proposed on a few occasions with both clubs non plussed on leaving their individual homes. The last drawn up plan was part of Scotland’s failed bid to host Euro 2008 with construction of a new site at Caird Park.
The record attendance at Dens Park is 42,024 when Dundee played Rangers in a Scottish League Cup in 1943. The current capacity is 12,085 all seated. 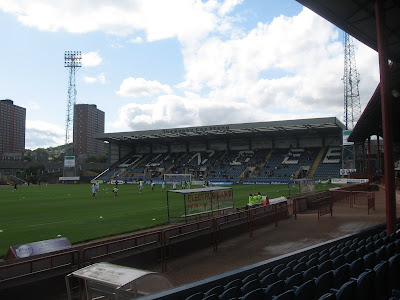 This visit to Dens Park was part of our Dundee double weekend, my companions for a weekend of fitba and bevvy was my bessy mate Zippy and Mr. Michael Brass.
We left Newcastle at 9.36, catching our connection at Edinburgh for the scenic journey through the Kingdom of Fife before crossing the Tay into Dundee.
We stayed at the Travelodge (those swipe keys are useless…Eddy) in the city centre. After dropping off our bags we headed to the nearby Wetherspoons - The Counting House for our first of many, many pints over the next two days.
There was a gentleman standing at the bar, a Dundee supporter who advised me on which pint to select. He introduced himself as Gearaidh and we conversed on my specialist subjects of football and real ale.
When we left to head to the bookies I told him I was backing Dundee to win 4-0. His reply was “Nah, 6-0, Stranraer are rubbish” so I told him I’d compromise and go down the middle - 5-0 to the Dark Blues.
So between the two of us we got the score correct. Stranraer got off lightly only conceding five and as my Dundonian friend so rightly said; Stranraer were rubbish, they didn’t produce a single shot on target or win a corner kick, although in their defence they’ve signed eleven new players this summer, so maybe this new team needs time to gel. 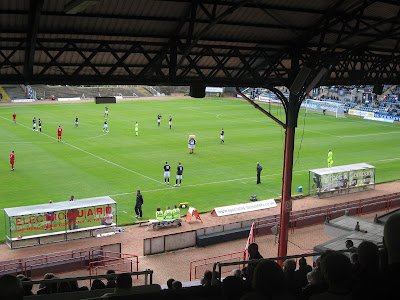 Dundee produced some good openings in the early stages with new £100,000 signing from Partick Thistle Gary Harkins looking impressive on the left flank.
A quarter of the game had passed before Dundee finally took the lead. A corner kick was nodded back into the path of Sean Higgins, who’s shot went through the keepers body before staggering over the line.
Harkins added a second after half an hour before the goal of the day. A long range effort from Higgins was superbly tipped onto the bar by Mitchell ,the keeper quickly got up and caught the rebound before dropping the ball into the path of McMenamin, who graciously knocked the ball into an empty net.
McMenamin headed in his second goal early in the second half before the cross bar denied the striker of a hat-trick. He was replaced on 54 minutes by another new signing Leigh Griffiths, who marked his competitive debut by converting a spot kick, the penalty rewarded rather harshly for a soft challenge on Harkins.
Stranraer were reduced to ten men on 78 minutes when keeper Mitchell hacked down Harkins outside the area. Outfield player Danny Mitchell (meaning D. Mitchell was still in goal) was the replacement between the sticks and he managed to keep a clean sheet for the last ten minutes, the home sides late efforts going each side of the post .
An easy but convincing passage into the 2nd Round of the League Cup for Dundee. They look a good bet for promotion this season, they’ve added some quality signings and their supporters are confident they’ll be celebrating a return to the SPL come May. 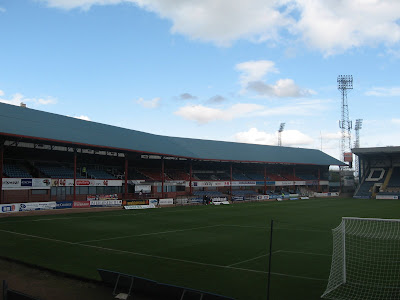 We backed Dundee to win 4,5 and 6-0. The latter score produced odds of 50-1. The fact Dundee didn’t test the stand in keeper denied us some valuable beer tokens, although our little win did pay for our mixed grills at Wetherspoons after the match.
Saturday night was, as you would expect, spent on the lash! Special thanks to Dundee based Toon supporter Ross Magoo (user name) on the Newcastleonline forum, who gave me some excellent advice on the city’s best pubs.
We opted for the Perth Road pub crawl, starting in the GBG listed ‘Speedwell’ and working our way back towards the city centre. We managed to clock up nine bars on our crawl before staggering to the nearest take away for a much needed ‘kebab compass’ to find our way back to our digs.
We crashed out in the hotel at around 2am, a long and enjoyable day one in our Dundee double weekend, with another match on the other side of Sanderman Street to look forward to the following day.

One wee quibble - before jute made its mark, it was flax, not wool, that was spun and woven in Dundee!

excellent read mate and im glad you enjoyed your weekend and took time out to come see the mighty Dee's. Your welcome back anytime!!

The record attendance for Dens is 43,024 in 1953 against Rangers in the Scottish Cup. You obviously put too much faith in wiki after it was hi-jacked by a Dundee United fan! (I've since corrected it!)

Thank you, that was extremely valuable and interesting...I will be back again to read more on this topic.

Top web site, I had not noticed 100groundsclub.blogspot.com previously in my searches!
Continue the good work!