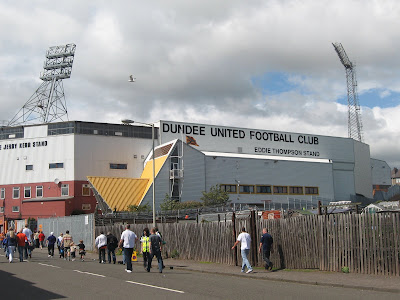 Dundee United mark their 100th anniversary this year. Part of the Tangerines birthday celebrations is a match against the once mighty Newcastle United, the second part of my Dundee double weekend.
Dundee Hibernian formed in 1909 by the city’s Irish catholic community, taking over the lease at Clepington Park, which at the time was held by current tenants Dundee Wanderers.
You could say that Dundee Wanderers weren’t too happy at being evicted by the ground’s landlord in favour of a more generous offer from the Hibs club. The angry former occupiers stripped the ground bare, taking down the grandstand, fences, changing rooms and the goalposts, leaving an empty field instead of a ready made football ground to play in.
The ground was then renamed Tannadice Park after the street where the ground’s main entrance is situated. £3,000 was spent on new facilities which included a pavilion with a 1200 seat stand.
A crowd of 7,000 witnessed the first match at the rebuilt and renamed ground, against their Hibernian counterparts from Edinburgh on 18th August 1909.
Major changes during the 1920’s saw the club renamed Dundee United after the club were saved from going out of business by a consortium of businessmen. The club then bought the ground for £2,500, raising finances through a share issue to make necessary ground improvements. Terraces were built, turnstiles and the Grandstand was enhanced, but the main renovation was to the pitch. Dynamite was needed to blast the solid rock under the surface to rid the steep slope and level the pitch.
It was 1957 before Tannadice saw any new major changes. The Shed end was built when a roof was erected over the West End and concreting at the opposite side on Arklay Street.
The record attendance was set in on 23rd February 1952 for a Scottish Cup tie against Aberdeen and floodlights were first switched on in November 1962 for a League fixture against Rangers. 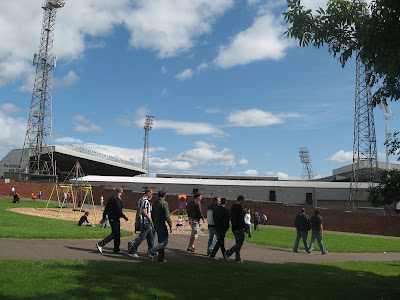 The new main stand; The Jerry Kerr Stand was built in 1961 and took over a year to complete, the first in Scotland to have a cantilever roof and later in 1971, the first to have a glass fronted lounge for sponsors. The stand was extended in 1997, the newer part can be identified by the extended roof and the dark coloured seats.
The large terrace on the North side was first covered in 1979 and replaced in 1992. The stand is now named after former chairman George Fox. The stand has two tiers, a smaller tier of about half a dozen rows with a larger section below.
The Shed was installed with seats in 1994, there are still sections of the original terrace at either side. The Shed seats along with the rest of the stadium are decked out in tangerine which certainly gives Tannadice a vibrant vibe.
It’s a well known fact that the two senior Dundee clubs are the nearest neighbours in Britain and the second closest in Europe.(there’s two closer in Budapest) It’s not till you actually see it for yourself that you realise the proximity of the grounds, approximately 100 yards on either side of Tannadice Street. 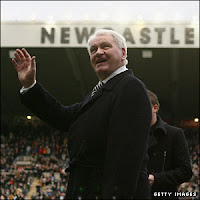 When I booked trains and accommodation for this weekend back in early June, little did I know what a significant match this would become. The game was to mark the Tangerines 100th birthday, but the passing away of a true football legend this week overshadowed their special day, although I suppose that fact wouldn’t have been an inconvenience to the hosts.
I was glad to be at the first Newcastle United game since Sir Bobby Robson’s death. Around 2,500 Toon supporters travelled north just to be here, to sing the great man’s name and be part of a celebration of his life. The Dundee folk I spoke to over the weekend all mentioned Sir Bobby, saying how they liked him and relaying famous comedy quotes from his life.
The previous 24 hours I witnessed Dens Park honour his memory by holding a minutes silence, but the players and supporters decided that a minutes applause would be more fitting tribute. This was greatly acknowledged around Tannadice, with a rendition of “Robson Wonderland” ringing out from the Toon Army contingent.
With the current state of affairs at NUFC, the Bobby Robson era seem a lifetime ago. My everlasting memory of the Robson years is that I couldn’t wait for the next game to come around. I hated things like International breaks or blank Saturdays. Going to the match at the weekend was like it was when I was a kid, exciting and guaranteed entertainment, win lose or draw. I’ve never had that feeling since, over the last few years going to the match has been with a feeling of apathy, with last season’s campaign being one of dread.
Of course we didn’t win anything, but we came close and enjoyed matching ourselves against the cream of Europe. There was consecutive finishes of 4th, 3rd and 5th with the last of those positions looked upon as failure.
That just shows how the mighty have fallen. 5th top in the Premier League not good enough? At the moment I’d settle for 5th top in the Championship next season and a crack at the play-offs.
RIP Sir Bobby Robson - I thank you for giving us such treasured memories and making us smile. 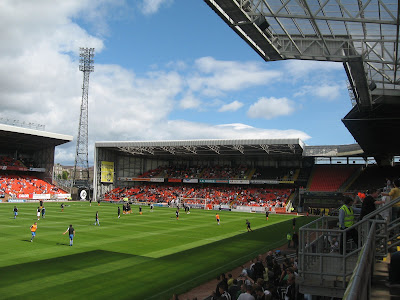 This weekend was great. Bagged a couple of new grounds, cracking night out, canny drink, good crack and a laugh, then it gets spoilt by having to watch Newcastle United for 90 minutes!
It may be a new football season but nothing’s changed both on and off the pitch. With this being a match day I’ll comment on what I witnessed on the park, which wasn’t too pretty. The only pleasant sight being Newcastle’s new attractive looking new away strip, similar in style to Inter Milan, however the team were more Matalan than Milan.
The only positive was the team defended well, with youngster Tamas Kadar having a steady game at the back. However it’s in the last third where it all goes wrong, there’s not much of a threat going forward. During the game I made a few brief notes about some of our ‘star’ players; Gutierrez - ponytail on legs and not much else, Smith - A passenger with a nice haircut, Duff - unproductive loves running into cul-de-sacs, Barton - Thug Sunday pub player, Nolan - (got a)Big Fat arse!
There wasn’t much action during the first forty-five minutes. A Swanson shot was easily dealt with by Harper, likewise Banks had no problems gathering a weak header by Carroll.
The game improved as a spectacle in the second half. Newcastle took the lead on the hour when a Duff cross was parried by Banks, Carroll taking advantage with a good finish.
Five minutes later referee Chris Boyle awarded a penalty after a handball from Nolan. Swanson’s spot kick was brilliantly saved by Harper diving to his left, with the rebound going wide of the post.
Barton missed a good opportunity on 70 minutes, when running through on goal, Banks’ save fell to Carroll, who was unable to find the target which would have clinched the game.
Then on 84 minutes Dundee United were rewarded a second penalty when Ryan Taylor pulled back Ryan Conway by his shirt. This time David Goodwillie (sounds like a porn star...Eddy) made no mistake from the spot sending Harper the wrong way.
Overall a fair result, but both teams were unconvincing, especially the ‘stars’ in stripes who’s Championship campaign gets underway in less than a week, still manager less, clueless and with no sense of direction. 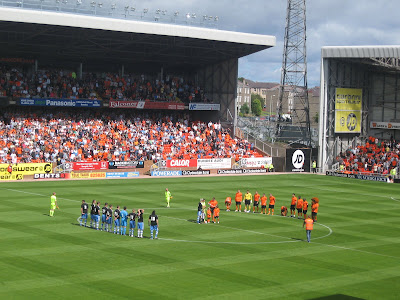 The morning after the night before, myself, Zippy and Mickey felt a bit rough, A couple of paracetamols, coffee and a bit fresh air did the trick, meaning we were ready for a pre-match drink before heading back up to Hilltown.
After a Sunday Club dinner at Wetherspoons and having to wait until 12.30pm for a drink (Scottish Law) we jumped a taxi to the Frews pub, which was a 5-10 minute walk from the stadium.
The Frews is a Dundee United bar which is adorned with Arabs memorabilia. There was also a wee shrine on the wall to Sir Bobby, with a Newcastle shirt and press cuttings from the last week.
The only problems we encountered over the weekend was what to do with our travel bags through Sunday afternoon. The Travelodge wouldn’t keep them and the Train station doesn’t have a luggage hold, this meant having to lump our bags around with us at the match. Luckily when the landlord of the Frews bar saw we had luggage, he kindly offered to let us leave them behind the bar when we went to the match.
The landlord looked familiar to me and Zippy. I thought he was an ex-footballer, he was strong in stature and had the respect of his customers. A big local laddy said the f-word a bit too loud and was abruptly told to button it, which he immediately did without argument.
After the game we went back for a drink and to collect our bags. As we said our farewells Zippy asked his breadknife who her husband played for, apparently he wasn’t who we thought he was, but she said we weren’t the first to mistake her hubby for an ex-fitballa.
We then hitched a taxi back to the train station, stopping off for one last drink before catching the 1819 back home. The trains again ran like clockwork, we arriving back on Tyneside at 2130.
As my reader may have gathered, I had a great weekend. I found Dundee a quite charming city with the Dundonian public very hospitable.
Apart from the big two clubs in the city there are seven Junior clubs knocking about close by, so maybe Dundee hasn’t seen the last of me, so a return to the former city of “jam, jude and journalism” may be a possibility sometime in the future.

Sounds right up my street that. Dundee duly added to my list for this season.

What a star of a landlord as well. Fancy a hotel chain not letting you leave your bags there. That is daft.

Eight floodlights near enough in one street. Mmm.....

RIP Sir Bobby Robson. Never could understand why he got the sack at Newcastle.

Glad you had a good trip up North Shaun. It fell perfect for you that one!

The Junior grounds I have been to
Lochee United
Lochee Harp
Dundee Violet
All very basic, Violet probably has the better facilities due to having a social club on site. (Proper Toilets, Luxury!)


Tayport's Canniepairt is close enough to visit from Dundee as well.

It's a tad better than the Dundee grounds! (2nd best I've been to behind Linlithgow Rose, Forfar West End is also pretty good)

Good to hear you enjoyed Frews mate. I work there, and got roped in to helping out (in my Dundee United strip) when it got a bit busy. Despite the fact that I'd had a few pints myself.

All the best this season, though I think yous will struggle.

My how times have changed.