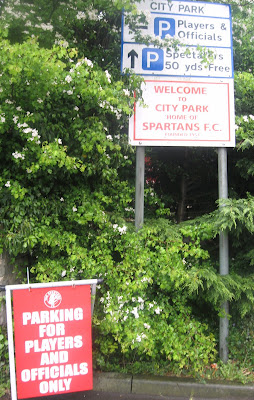 Spartans FC play in the East of Scotland Premier Division, based five hundred yards off the Crewe Toll in the north end of Edinburgh. The club have played at City Park since 1976, which coinciding in becoming full members of the Scottish FA.
The ground belongs to Edinburgh City Council, this season definitely being its last as far as fitba goes. The site is earmarked for a housing development with the club set to move a short distance to Ainslie Park, which has a 504 seated stand, floodlights and a floodlit 3G pitch.
The ground was previously the home of Ferranti Thistle and Edinburgh City but is famously known for its sloping pitch, maybe one of the steepest I’ve seen on my travels. Unfortunately the main stand was deemed to be unsafe after the Taylor Report and demolished in 2004. The ground is fully enclosed made up of slant grass banking on all four sides. the changing rooms, canteen and offices are situated in portakabins at the bottom of the car park.

The Spartans FC was formed in 1951, the brainchild of two former Edinburgh University players, gaining instant entry to the East of Scotland League. Originally the club catered for players affiliated to the University, but now the club is open all comers and is a big part of the local community.
The club run a second and third XI, with junior teams from under-19’s down to under-8s level, giving them more registered players than any other club in Scotland. There’s also a new ladies team which was formed this season after merging with Edinburgh Ladies FC, playing in the Scottish Women’s Premier League.
Spartans won the first of six East Of Scotland league titles in 1971-72, the latest came in 2004-05 which saw the club retain the Premier trophy. Most of their success has came in cup competitions, collecting honours twice in both the League Cup and City Cup, also adding seven South Qualifying Cup’s, with most of their triumphs coming in the Kings Cup which they’ve won on nine occasions.
They first played in the Scottish Cup in 1978, knocking out a few league clubs over the years - East Stirlingshire, Alloa Athletic, Arbroath, Berwick Rangers and Queens Park have all been put to the sword by The Spartans. However the club have hosted some big cup ties against SPL side Livingston in 2004 and St. Mirren in 2006, both produced crowds of over 3,000, with the latter almost producing a major cup shock, as the Saints were lucky to get back to Paisley with a goalless draw in front of a club record gate of 3,346. 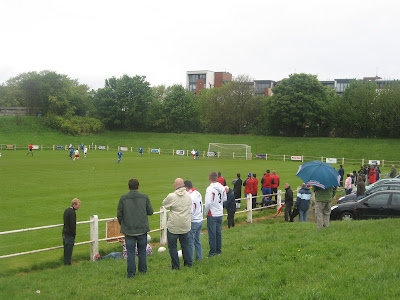 Since the turn of this decade the club has picked up honours every season, and this campaign could see another league title as they currently sit in pole position with three games left to play, their chances greatly improved with an impressive win over opponents Easthouses Lily.
Spartans started the game positively, kicking down hill in the first half missing several good opportunities, then finally on the half hour they took the lead through Keith McCleod, nodding home at the near post directly from a corner kick.
The second half saw the heavy rain persist as well as the pressure on the Easthouses goal, with McCleod adding his and Spartans second, taking advantage of a poor clearance from the Lily keeper, before run through on goal and finishing well. His strike partner David Etale made it 3-0 on 77 minutes with a great individual effort, receiving the ball near the by-line, he wriggled his way around the defence before shooting home at the near post.
The visitors received a red card a minute later, when their number 10 was sent off for abusive language towards the referee after he failed to award him a free kick, there was no hesitation from the ref, everyone in the ground could clearly hear him being called “a bleating runt” - excuse the spelling!
Spartans had numerous chances to increase the score, with man of the match McCleod missing out on completing his hat-trick. The win keeps them on course for the league title, while this defeat for Easthouses Lily has confirmed their relegation to Division One. 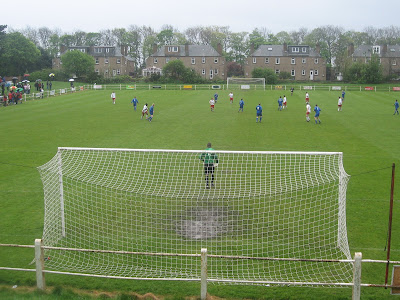 Big matches locally this weekend on Friday and Monday nights meant a vacant Saturday, allowed me to nip over the border, leaving Newcastle at 1145 and arriving at City Park in just under two hours. The ground is easy enough to locate, a short walk from Waverley train station over to South Street David off Princes Street, where I met the 27 bus service which drops you off on Ferry Road, leaving a short walk to the ground.
While I was in the vicinity I took the opportunity to visit Spartans new ground and Football Academy at Ainslie Park, which is just around the corner from City Park. I then stopped off for some bait in the nearby Morrissons, enjoying one of their “Big Scottish Breakfasts” which is the same as a full English Breakfast, the only difference is your eating it further north.
I then faced the heavy downpour which started as soon as I got off the bus and didn’t stop until just before the match finished. Which resulted in your author being drenched to the skin, the thin Harrington jacket not offering much protection and my training shoes no defence against soggy feet!
When arriving at the ground your greeted by an old fellow taking admission and selling programmes, using the front seat of his Hyundai Accent and the open passenger seat door as a gateway into the ground. Everyone at the club was seems very friendly, special mention to Jeanette who made sure I secured a pin badge and they also took pity on me at half time, looking similar to a drowned rat they offered me shelter and made sure I got a nice warm cup of tea.
After the game I heading back into town, calling into the ‘Café Royal’ and my favourite pub in Edinburgh - ‘The Guildford’ where I found there was a beer festival on with a great selection of ten different ales, which only made me wish I was booked on a later train.
Apart from the soaking I enjoyed the second last game at City Park, the curtain comes down next Saturday (May 16th) against Edinburgh City, then from next season the club will be using the new facilities full time. Prior to this season the club missed out on their first election to the Scottish Football League to fellow East of Scotland side Annan Athletic, but if another vacancy was to arise then the club now have everything in place, that should see a more successful application to the Scottish League.