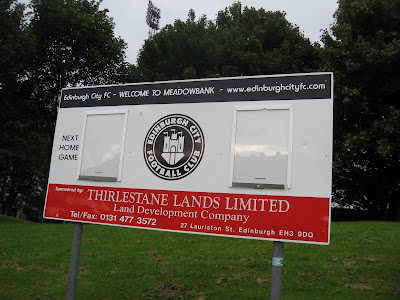 I took advantage of a work free Saturday and headed up north to Edinburgh, visiting a stadium with an uncertain future for the start of this seasons Scottish Cup, at the same time it gave me an excuse to get away from the circus which is going on nearer to home.
Meadowbank Stadium has a capacity of 16,500, building began in 1967, completed in time for the 1970 Commonwealth Games, it also staged the games in 1986 and is more commonly used nowadays as a venue for music concerts, it was on such an occasion that I previously visited the stadium, seeing the Pixies and Teenage Fanclub at T on the Fringe in August 1995.
Only the Main Stand is in use now, a steep cantilever stand, with 7,500 discoloured dark orange seats, which is starting to look it’s age, the rest of the stadium’s made up of uncovered wooden bench seats and terracing which curve parallel with the running track, these three sides are out of bounds for safety reasons. The changing rooms are in the corner, in a separate building block which doubles as a support for one of the four tall pylons, which can be clearly seen from the town centre end of London Road, on entering the ground you walk over a 100metes track which runs underneath the stand, there’s other facilities with the sports centre next door and the nearby velodrome.
East of Scotland League side Edinburgh City, have played at the stadium since 1996, after Meadowbank Thistle relocated to Livingston the previous year. The club reformed in 1986 when Postal United were allowed to take the Edinburgh City name (there was another Edinburgh City between 1928-1955) playing at various parks throughout the city, beginning at Saughton Enclosure, they later moved on to Paties Road and City Park, where the original ECFC played in the 1930’s and 1940’s.The Citizens attempted to get into the Scottish League this summer, unfortunately missing out for a second time, losing out to Annan Athletic, after another previous attempt in 2002 when Gretna replaced Airdrieonians.

The match was an open entertaining game with plenty of incident, both teams went flat out from the start and after only five minutes it could have easily been 2-2 , but it wasn’t until the 26th minutes that the first goal was scored. A free kick from the right hand side found City centre-forward Robbie Ross, who easily nodded home from 12yds out. Nairn had a golden opportunity to get back on level terms five minutes later, winning a penalty after the defender dragged the striker down to the ground as he tried to get on the end of a cross, surprisingly the culprit received a red car and then took an eternity to leave to field, taking the furthest possible route back to changing rooms, the delay tactic worked, putting the penalty taker off as Monteith made a fine save to his right hand side.
The Citizens doubled their lead after 53 minutes, a similar goal to their first, this time I was Michael Bruce who got in behind the County defence with an easy header, after another good delivery into the box. Nairn tried their best to pull a goal back, but 10 man City held firm as the visitors became more frustrated , this was typified with another red card five minutes from time when County’s big right-back McDonald screamed “Foulk Off Ref” when he failed to award a corner kick, even though the stand is quiet far from the pitch, the shriek was clearly heard from everyone in the ground and probably anyone walking down London Road. City ran out comfortable winners over their Highland League opponents, and were reward with another home tie in the 2nd Round against Wick Academy.
In March this year the City of Edinburgh council voted to demolish the stadium, to make way for new housing. There is strong local opposition over the councils plans, the stadium’s an essential facility which is frequently used by athletes and various sports groups, as well as it’s historical heritage, it’ll be a sad loss to the community, with no alternative sporting facilities east of the city, although there’s been proposed plans to construct a smaller sports facility east of the site. The council has no firm commitment to redevelop Meadowbank, so the stadium is stuck in limbo, looking outdated and left in neglect until the council get there own way, which seems just a matter of time, lets hope it’s later rather than sooner. 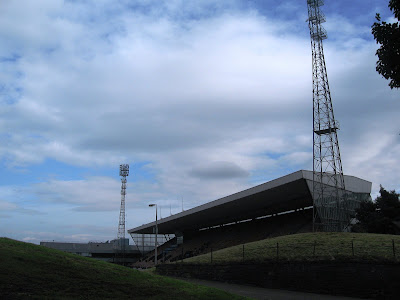 I left home with the breadknife and the kids at 9.45am, a straightforward journey up the A1 with no hitches, meant a 12 o’clock arrival at Meadowbank. We caught the bus along to Edinburgh city centre, heading to the JD Wetherspoons pub ‘The Standing Order’ on George Street, where we had a spot of lunch, and I met up with 100FGC squad#81 Jamie McQueen.
I left Debra and the kids to trudge around the town as me and Jamie headed off to the match, stopping off at a pub on the way to catch the Merseyside derby, with my Fitba Daft blogging pal delighted with the Reds 2-0 win.
I parked the car next to the stadium, so was able to head straight off after the game. I made a wise choice, escaping another depressing afternoon at St James Park, for a day out in Edinburgh, and more importantly the opportunity to attend a match at a stadium which is in danger of becoming extinct.
I arrived back home at 7.20pm, tearing back down the A1 in good time, which made the breadknife very happy, part of the conditions of our trip was we had to be home by a certain time, I achieved this feat with time to spare, so by 7.45 she was contently sitting with a can of lager in front of the TV, watching that effing X-Factor.