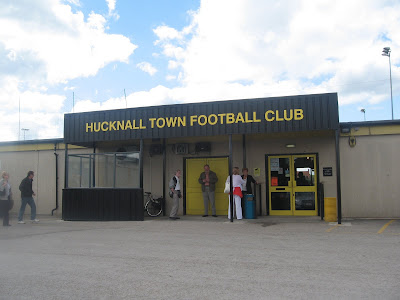 Hucknall is a town in Nottinghamshire in the district of Ashfield, formerly known as Hucknall Torkard. The town is situated 7 miles north-west of Nottingham on the west bank of the Leen Valley, the site of the towns colliery between 1861-1986.
The miners formed Hucknall Colliery Welfare FC in 1945, playing on a pitch on the site of Number 2 pit (aka Bottom Pit)in Wigwam Lane, which had cover in the form of a small hut and changing rooms courtesy of the pit baths. When the ground was required as a tipping site, the club moved opposite Number 1 pit (aka Top pit) located on land where the current Watnall Road ground stands, playing Junior Notts Football.
The club progressed in the Bullwell & District League and Spartan League, then joined the Nottinghamshire Alliance League in 1970, winning its Division 2 title in their first season. They achieved a league and cup double the following year, winning the First Division championship three times in total, as well a further four Senior Division titles over the next 19 years.
The Central Midlands League was dominated from their acceptance in 1989-90, winning the league and cup double two years running, then in their third season they completed a League Cup hat-trick, but missed out on the title finishing second, however that was enough to gain promotion to the North East Counties League.
They had changed their name to Hucknall Town in 1987,and the club continued to make rapid progress through the pyramid winning promotion and further cup honours, until reaching the Unibond League in 1997-98, again achieving another promotion to its Premier Division at the turn of the millennium.
The Yellows were denied a place in the Conference National when Watnall Road failed to meet the required ground criteria, instead they had to settle for a place in the newly formed Conference North after winning the Unibond Premier League in 2003-04.
The following season saw the biggest day in the clubs history, reaching the FA Trophy Final at Villa Park. Their opponents were Conference side Grays Athletic, the scores remained level at 1-1 after extra time, but Grays went on to lift the 2005 trophy, winning 6-5 in a penalty shoot out. After escaping relegation last season, benefiting from the financial turmoil at Nuneaton Borough and Boston United, the club have continued to struggle in 2008-09, spending most of the season at the foot of the table, with relegation confirmed earlier this month. 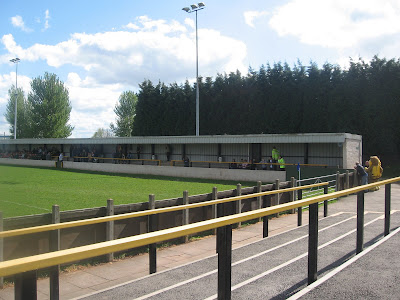 Watnall Road is a pretty basic affair, there’s a covered terrace behind the nearside goal, including a hospitality cabin, the cover continues around to the Main Stand which runs full length of the pitch. The stand was built in 1990, two-thirds has a section of red, black and yellow seats which were added courtesy of Meadow Lane, there’s also a PA office, with a standing section at the far end.
There’s five steps of open terrace behind the far goal and an open hard standing area behind the dugouts, the club shop, first aid office, toilet block and changing rooms are also situated at this side.
The “Talk Of The Town” is the very impressive clubhouse, The Eric Jackson Lounge is a small lounge bar and there’s the spacious main room called The Bryron Suite, which is regularity in used for functions, there was a band setting up their gear for that evening’s gig while we were having our post match drink.
The 2009-10 season will be the club’s last at Watnall Road, a new development opposite the current site on Aerial Way will see a new 3,400 capacity stadium. The current ground is making way for houses and industrial units with club Chairman Brain Holmes stepping down from his position at the end of the season, to concentrate on overseeing the move to the new ground. 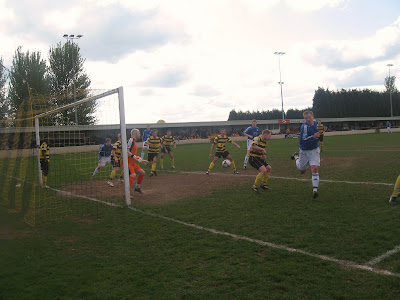 Tamworth took the Conference North title on Tuesday night (congratulations!) meaning Gateshead went into this game needing a point to secure second place, thus guaranteeing home field advantage (as they say in the USA) in the play-off final should they progress through the semi finals.
The game was played on a bumpy surface, the Watnall Road pitch has taking a good hiding this season, having Worksop Town as tenants as well as being used by a Sunday league side.
The visitors took the lead on 34 minutes when a Turnbull corner was flicked on by Armstrong at the near post (see picture above) before taking a deflection off Smedley past his own keeper, then good play from Phillips on the left set up Armstrong to score from close range early in the second half.
However Gateshead took their foot off the gas with Hucknall producing a spirited comeback, clawing back the two goals deficit to gain a well earned point. Winters pounced on a loose ball into the box, before turning quickly and shooting under Musselwhite’s body, then minute’s later substitute Bonnick found space to fire a right foot shot into the far corner.
There was no need to worry, as news of Southport’s imminent defeat at Farsley Celtic meant second place was assured, so if Ward’s injury time header had have gone in it wouldn’t have mattered although we‘d be disappointed to see the lads lose out to the wooden spoon winners.
Gateshead now face Southport in the play-off semi finals, traveling to Haig Avenue on Wednesday with the second leg at the Stadium next Sunday. The final is on Friday 8th May, the game being shown live on Setanta Sports.
I’ve mentioned in my programme notes for next Sunday’s match that whatever happens this season, if we go up or lose out in the play-offs, overall it’s been an excellent season, the Gateshead supporters should be proud of the achievement of Ian and the lads to get us this far, finishing league runner-up is more than we expected, so well done and fingers crossed that we can climb those last steps towards the top of the pyramid. 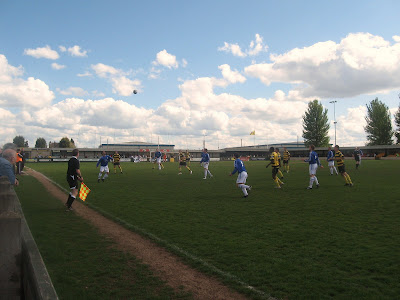 The old traditional Heed Army fancy dress for the last away game of the season saw a diversifiable collection of characters. Amongst those taking part (although your author wasn’t one of them) was; one large Batman, two little Batmen, Robin, Superman, Captain America, Pirates, a fortune teller (sorry Victoria, I forgot you were a pirate as well) construction worker or Village People wannabee , two cows, a mini Spiderwoman, a prisoner, a Mexican, 70’s disco man, five men of the cloth and finally the stars of the show, Captain Carter and General Gaddess dressed as two French tarts with make up, fishnets and looking incredibly sexy (if that’s what floats your boat!)
A special thanks to GFC Chairman Graham Wood for contributing to the cost of the two coaches, we left Tyneside at 9am, arrived in Hucknall in good time at around 12.20pm, giving us a good two hours in the town centre before the coach picked us up to take us to the ground.
We heading straight into the Red Lion pub, the locals astonished by the sights and noise which had invaded there quite little town, then along to the Pilgrim Oak further along the High Street, savoring the choice of fine ales as part of Wetherspoons International Real Ale Festival.
As is usually the case on a Heed Army away trip, it was an excellent day, a really good laugh and a great way to finish the regular season. There’s a collection of photographs taking by Private Mick Rowan, with pictures of the Heed Army in fancy dress, along with action from the game, which can be viewed and enjoyed - HERE (*PARENTAL ADVISORY VIEWING*)