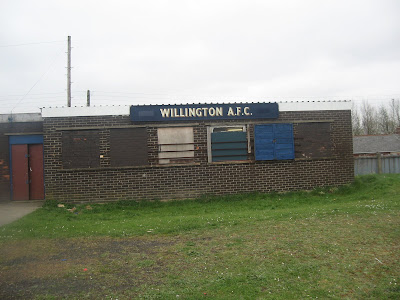 Willington is a former pit town whose colliery closed down in 1967, it’s situated seven miles south-west of Durham city on the A690 road towards Crook.
Willington Temperance were formed in 1906, originating from the Temperance Club in the town, playing in the Auckland and District League. In 1911 the club dropped their surname and moved from their West End ground, purchasing land from Lord Boyne on Hall Lane, where they immediately spent £200 on levelling, draining and relaying the pitch. This was the same year the club switched to the Northern League, where they played for the next 94 years, becoming league champions on three occasions in 1913-14, 1926-27 and 1929-30.
The club also won the League Cup eight times, but their greatest cup success came in the FA Amateur Cup. In 1939 the club reached the final, their opponents were the all conquering Bishop Auckland, after being the better side in a goalless ninety minutes, they lost out in extra time, eventually succumbing to three unanswered goals in front of 20,200 at Roker Park.
In 1950 they reached the final for a second time in a repeat of the final eleven years earlier, Bishops were making their 13th final appearance and it proved unlucky for them, as Willington walloped their County Durham neighbours 4-0, in front of 88,000 at Wembley Stadium.
The Northern League formed a Second Division in 1982-83, in that season the club finished bottom of the new top division, they then spent their remaining life in the Northern League amongst its second tier. The club ran into trouble off the field in December 1996, being were very close to folding after running into a variety of problems, resulting in team manager Malcolm Smith taking over the reigns as acting chairman and a new administration put together, who worked hard and kept the club afloat.
On the field things didn’t improve either, the side struggled at the foot of the Second Division, then after finishing bottom in 2004-05, the club stepped down to the Wearside League, being replaced by Darlington RA and Ryton, coincidently the other club to drop out of the Northern League that season were today’s opponents Easington Colliery. 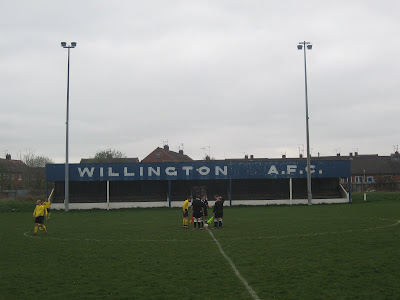 On a bumpy pitch which is desperately in need of a short, back and sides, the game produced plenty of goals mainly the result of defensive lapses than outstanding skill. The opening goal arrived after only 3 minutes, Crawford stayed onside before rounding the keeper with a confident finish, then in the 10th minute Box was free in the box, having an easy tap into an empty net after his strike partner had drawn the keeper and squared the ball to the unmarked number 10.
The game then produced three penalties in the space of 20 minutes, the first was awarded to Easington, Emerson saw his spot-kick saved but the ball rebounded kindly to the striker who made no mistake with his second effort. Minutes later the same player was fouled in the box, this time he opted not to take the kick, leaving the responsibility to Tarn, who showed him how it should be done, blasted his shot past the keeper to make it 3-1.
Five minutes before half time, a clumsy challenge gave Willington a chance of a free shot at goal, Blenkinsopp converted the pen to bring the home side back into the game, then just before the break a long throw seemed to miss out everyone in the box until a header from Banks(who is claiming it)hit a defenders leg, beating the goalie at his near post. 3-3 at half-time, time for a breather, so I appreciated the cup of tea and slice of cake in the hospitality room, which gave me a chance to catch up on the names of those first half goalscorers.
As is usually the case after a 45 minute goal glut, the goals tend to dry up after the half time bollocking, alas only one more goal to report, this went to Easington, with Tarn getting his second goal of the afternoon, picking the ball up just over the half way line and running though on goal, taking his chance with a cool finish.
Willington were reduced to ten men on 84 minutes, when one of their substitutes who had only been on the pitch no more than ten minutes, did something which I missed, but whatever it was, it upset the referee so much, that he didn’t even take his name, just ordered him OFF! The Easington bench gave the lad a bit stick and he replied with every vulgarity and obscenity that is possible in the space of two sentences! Overall a great game, full of blood and thunder - a credit to the Wearside League 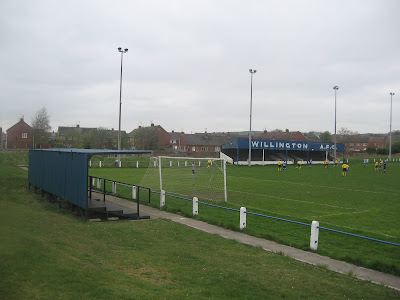 I received an email from Willington’s club secretary Geoff Siddle at the turn of the new year congratulating me on the website, but making the point of one glaring admission from the blog, that of Willington FC. Hall Lane is a ground which has somehow escaped me throughout the years, I have intended visiting in the past, but with one thing or another just having got around to it.
I’ve worked out that there’s 72 Non-League grounds (to step 7) in the north-east covering Northumberland down to Teesside, now that I’ve finally ticked off Willington before the ground’s 100th birthday, I only have four left to complete the set.
The Hall Lane ground is leased to Willington FC, but strangely the Main Stand is owned by the council. The stand dominates the ground, mainly due to blue roof façade with the clubs name in big bold white letters, inside there are blue wooden benches bolted onto five blocks of steps, with white supporting walls and six supporting pillars at the front, the stand has a centre parting which once upon a time would have been the players tunnel, but now leads back out to nothingness.
The social club is next to the turnstile entrance, with a toilet block(future bog blog) further along hidden in the corner, the changing rooms with refreshment bar are at the entrance side on the halfway line, this also has a couple of rows of wooden benches on the front steps, which tends to be the main spectator area as well as the hard standing behind both dugouts.
There’s also a small covered stand behind one goal which is parallel with the 6yd box, where there’s traces of terrace steps at either side, while the far side goal is partial hard standing with a grass bank for a raised up view.
If you take a look at the my pictures of the ground, you’ll see that this is a classic old venue which has seen better days, like in its heyday when the ground was full to the rafters when 10,000 crammed into Hall Lane in the FA Amateur Cup. Geoff took over as Club Secretary in and new year, the team had one point in seventeen games, winning for the first time this season in late January against Boldon. The club have shown a dramatic improvement since then, changes in the dugout have seen the team move off the bottom of the table and now the club are looking forward to starting from fresh next season and challenge at the top end of the league, thanks to Geoff and the Willington lot for making me welcome and best of luck in the future.