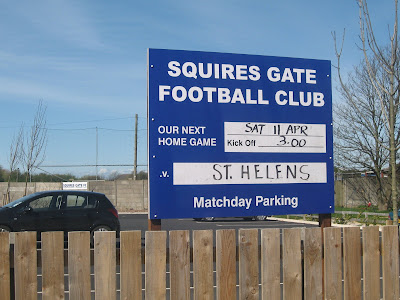 Squires Gate is a district of Blackpool next to the airport, approximately three miles south of the town centre, on the boundary with Lytham St.Annes.
Squires Gate FC were formed in 1948, playing in the Blackpool and District Amateur League, winning the leagues Rawling Shield in their very first season. They were originally called Squires Gate British Legion until 1953, before going on to win two consecutive league titles and more cup honours during the 1950’s.
After one season in the Fylde District League, where they won the Fylde Cup, the club then progressed to the West Lancashire League in 1961, where they plied their trade for the next 30 years, mostly within its Second Division, winning the title in 1981.
In 1991-92 the club were elected to the North West Counties League Second Division, winning promotion after ten seasons, after initially missing out on goal difference they took the place of troubled champions Stand Athletic. Their best performance in a major cup competition was in 2005-06 in the FA Vase, Gate navigatiing seven ties before losing away to Hillingdon Borough at the quarter final stage. 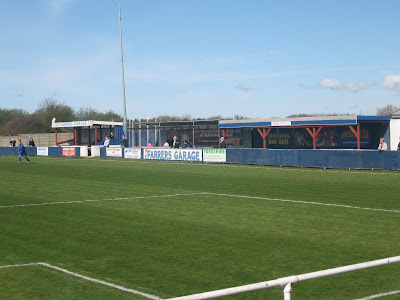 The ground is visible from the club’s own car park on School Road, from there you walk back along the street, past a few houses then into the lane next to St. Nicholas school to gain access.
I entered the turnstile just as the full time whistle was blown at Deepdale, putting the locals in a good mood after Blackpool’s 1-0 win against local rivals Preston NE. On entry you find yourself in the corner of the ground, next to the Wilf Carr changing rooms and a covered stand to the right of the goal, which has three rows of benches with whitewashed walls and SGFC painted blue on the back wall. The clubhouse is a white building which has the club name and badge on the gable above the door and also houses a refreshment bar to the side, facing out towards the turnstiles.
Pitch side are three separate structures, next to the clubhouse is a covered standing area, with another stand in the same style as the one found behind the goal. In between is another stand which is half built, although still in use, it looks like when completed it’ll be the same design as the other two stands.
The dugouts are at the far side, with a narrow pathway which is partly covered, this side of the ground runs parallel with Blackpool Wren Rovers Bruce Park ground, you can see two sets of pylons facing in opposite directions, looking as if they’re not speaking to each other, facing onto their equivalent pitches. The far goal is open with a large lawn area towards the enclosed fence, the grounds biggest gate was 600 for a friendly against Everton in 1995. 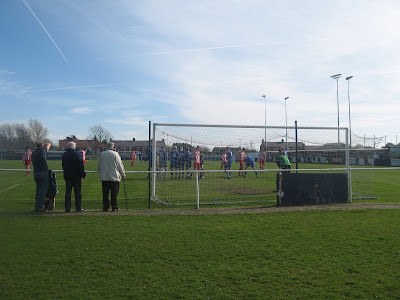 After only five minutes of the North West Counties League Premier match, I knew I was in for a more entertaining affair than the one I witnessed 24 hours earlier at Lancaster City, both teams looked up for it, with visiting side St. Helens Town more desperate for the points in their battle to avoid the drop.
Squire Gate started well, taking the lead after a quarter of an hour when a deep cross from the left came off the head of defender Chris Burke, creeping in at the far post.
The goal count, or should that be own goal count, was level after 28 minutes when a left wing cross, was met by Wayne Maden with a “Glenn Keeley style” diving header past the stranded keeper.
St Helens won the game in a ten minute spell in the second half, another left wing cross resulted in goalkeeper Speight pulling off two point blank saves before Gilchrist made it third time lucky, with an easy task past the stranded keeper.
The win was secured when a free kick was giving away on the edge of the box (see bottom picture) from a central position Brian Hatton fired home with a bullet shot through the wall to secure the win and the much needed three points back to Merseyside.
I enjoyed the game and would recommend a visit to Squires Gate, so if your spending a weekend in the Las Vegas of the North-West and fancy a break from the donkey rides, amusement arcades, kiss-me-quick hats and titty-bars, then why not take the short trip down to School Road, which is an welcome alternative and a break from the norm.