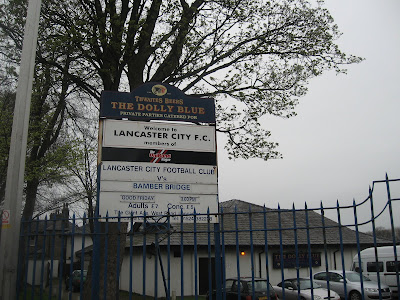 Lancaster is a city in the north-west of England on the River Lune, with its history based upon it’s port and canal and gives the red rose county of Lancashire its name. Built in the 13th century, Lancaster Castle was the site of the notorious Pendle witch trials in 1612, where the court within the castle sentenced more people to be hanged than anywhere else outside of London, giving Lancaster the nickname of “the hanging town”
Football’s been hanging around the town since the late 19th century, but it wasn’t until 1905 that competitive football arrived in the form of Lancaster Athletic, playing in the Lancashire Combination Division Two a year after Lancaster United failed to gain entry and immediately disbanded.
Athletic folded after only five seasons, but then another new club was formed - Lancaster Town began in the West Lancashire League until regaining entry to the Lancashire Combination. The club suffered a failed attempt to gain entry to the Football League Division Three(North) but went on to win promotion before going on to become Division One champions in 1921-22.
During the following decade three further titles were added until another name change in 1937, becoming Lancaster City after the town was giving city status as part of King George VI’s coronation celebrations.
After their early success, City failing to make much of an impression in the Lancashire Combination over the next thirty plus years, then in 1970-71 joined the Northern Premier League, a 7th place finish in 1976-77 was the Blues highest placing.
In 1982 financial troubles meant the club dropped down to the North West Counties Division, but returned after five years, when the NPL Division One was formed. In 1995-96 promotion was gained to it’s Premier League, going on to win the League Cup two years in succession in 2000 and 2001,until the reformation of the pyramid, allocated the Dolly Blue a place in Conference North in 2004-05.
Two years later the club was taking over by a local businessman, who basically dropped the club in the clarts, unpaid bills and players wages resulted in the club going into administration and a ten point penalty and relegation from the Conference North The club then went into liquidation but immediately reformed as Lancaster City FC Ltd, with a new board made up of former directors, the new club then became founder members of the Unibond League First Division North in 2007-08. 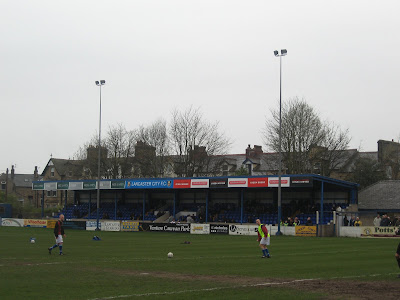 Giant Axe is on the edge of the town centre, next to the train station, in the shadow of Lancaster Priory Church and Lancaster Castle. The impressive Dolly Blue tavern is at the entrance gate with the ground itself at the other side of the car park. The ground’s name derives from when the ground was first built, the football pitch was in the middle of land known as “the sixpence” surrounded by a cricket pitch and tennis courts, when viewed from above the exterior wall had the look and shape of an axe head.
The main turnstile is in the right hand corner, behind the uncovered Club End Terrace. Down one side of the pitch is open hard standing , known as The Long Side, which has a portakabin used as a club shop, with another cabin assembled on top used for hospitality purposes. The team dugouts are also at this side, opposite is the Main Stand, which is made up of seven rows of blue and white seats, with a capacity of 500. The changing rooms are in a separate building next to it, along with the Dolly Diner refreshment bar, a shelter for wheelchair spectators and to the other side of the stand is another cabin, used as a office for club stewards.
The far goal has a smaller terrace known as The Shed, the roofs façade shows the club name and crest, there’s also another set of turnstiles here and also a good old fashioned manual scoreboard in the corner.
The Unibond First Division North clash with Bamber Bridge was; if I’m to be honest, a poor affair, but the game, as well as the dull weather was brightened up by the loudness of the Hawaiian shirts and sombreros of about 40 of the visiting fans, who didn’t seem too interested in the games outcome, just out for a good day out on the bevvy.
The best two chances of the opening period came in the space of a few minutes midway through the half, headers from Williams and O’Neil were both well saved by keeper Thornley, tipping both efforts over the crossbar. The solitary and winning goal arrived on 62 minutes, left back Heffernan picked up the ball and ventured forward, as he approached the edge of the box the Lancaster fans urged him to shoot, so he had a dig from 20 yards out, his shot was sailing wide but Jackson ran in front of the ball to divert to ball goalwards with a delicate flicked header. That win was a good start for new gaffer Tony Hesketh and that flukey goal may turn out to be a crucial one as the Blues still have a chance of making the end of season play-offs. 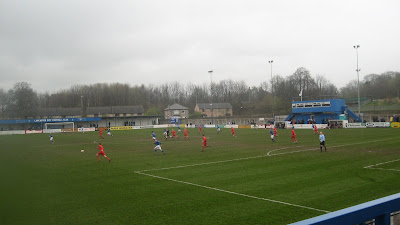 The City fans who vocally support their team(about 15 of them) stood on the Club End Terrace next to the Hawaiian Bamber Bridge supporters in the first half, exchanging good friendly banter, then in the second half they moved behind the dugouts, while the Bamber supporters stayed on the same terrace, both neglecting the chance to shelter from the rain and stand in The Shed.
As the game wore on, one of the sunny dressed Bamber fans kept running onto the pitch, basically acting like a bit of a tit, which resulted in a warning from the PA announcer. Then with a few minutes of regular time left, three of the lads invaded the pitch, but this time all three were bollock naked, which caused a slight delay in play and fits of laughter from the females present on the terraces. I took the opportunity to take a picture for the Matchday Web album,but didn’t take the option to zoom in for a close up!
I visited Lancaster as part of the bread knifes birthday on the Smudgers Easter weekend break away on the Lancashire coast. We were based in Heysham which is a few miles from Morecambe and only a 20 minute drive away from Lancaster, so I felt obliged to visit the town and Giant Axe on route to our digs.
After visiting Lancaster on Good Friday, the following day the kids wanted to return to Blackpool, where I took up the opportunity to take in a game in the North West Counties League at Squires Gate and on Easter Sunday we travelled to the Lake District, visiting Windermere, Bowness and stopping off in Ambleside, where I finally visited the gallery of the king of football ground photography - Stuart Clarke at his Homes Of Football museum.
We had a superb weekend, with the only disappointment coming on Bank Holiday Monday, when we called to Harrogate Town on our way home and witnessed a disappointing 1-0 defeat for Gateshead, which ended all hopes of winning the title. Apart from that setback we had a great time, the weather was surprisingly glorious and I managed to get myself a lovely suntan, a perfect break and surprise! surprise! the Toon even managed to avoid defeat at Stoke.