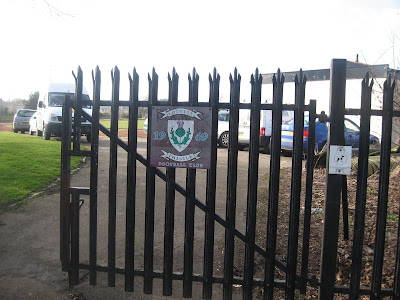 Lothian Thistle are based in the west end of Edinburgh, about a mile away from Hearts’ Tynecastle and within view of Murrayfield Stadium.
The club this year celebrate its 40th birthday, originally formed by the employees of Lloyds Finance, playing in the lower reaches of the Lothian Amateur League.
In 1970 the team’s gaffer and club founder Tom Allison left the company but wasn’t allowed to carry on his role at the football club. He reforming the club, taking the players from the Lloyd & Scottish team and amalgamating with Wardie FC to become Lothian Thistle FC.
Over those forty years the club have made great progress, through the 1980’s they had huge success winning honours in league and cup almost every season including the East of Scotland Amateur Cup in 1987. More trophies were added the following decade in the Caledonian League until the club were successful in their application to the East of Scotland League in 1995.
In 1996-97 Thistle gained promotion winning the Division One title, and doing the double, winning the East of Scotland ‘Image Printer’ Qualifying Cup. Recent years has seen the club maintain there position in the EoS Premier League, with success in the Alex Jack Cup, a trophy they’ve won four times over the last eight years.
In 1999 the club left there previous home at Campbell Park in Colinton, moving to the Saughton Enclosure. The ground is enclosed with a running track and perimeter fence, with ten bean pole floodlights around the grass banking. The changing rooms are set back behind the far goal, which have been upgraded to SFA standards, meaning the ground can host Scottish Cup ties, the complex also has nearby all weather 5-a-side pitches.
The game I attended was a 2nd Round Kings Cup tie against Eyemouth, a trophy Lothian Thistle won once before in 2004. The conditions were bright sunshine but with a strong wind, which played a crucial part in the games outcome.
Lothian had the wind advantage in the first half but fell behind to a goal from Crawford on 27 minutes, a good left wing cross set up an easy finish for the number nine, who was a wee bit over the top with his celebration, with one of the half dozen Eyemouth fans running towards him to give him a kiss and a cuddle.
That lead lasted only eight minutes, the equaliser arrived when Eyemouth’s keeper pulled off a tremendous point blank save, knocking a close range effort on to the cross bar, but Lothian(well named) was on hand to net the rebound. That goal arrived on 35 minutes and by half time it was 4-1, with Thistle using the wind advantage, scoring with each attack as Eyemouth seemed to be locked inside their own half.
Goals from Black with the aid of a deflection, Lothian netted his second, on hand after the keeper parried the initial shot, then the best goal of the lot, a pot shot from McAleavy which flew into the far corner, meant the home side had booked their place in the next round of the Kings Cup by half time.
There was no goals added to the tally in the second half, Eyemouth failed to make the wind advantage count, while the home side defended well and had chances to increase their lead on the break, so overall an enjoyable game and personally a good fixture choice. 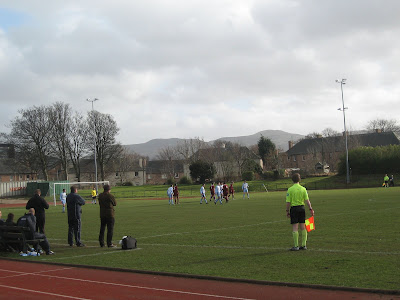 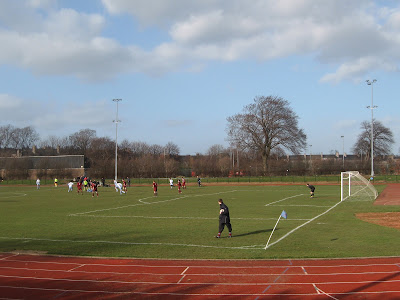 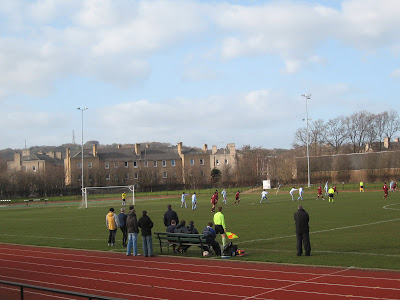 After leaving Easter Road at almost 2.30pm we overcame many obstacles to finally arrive at the Saughton Enclosure by 2.50pm, thankfully the players were kind enough to not bother making a start on the goal scoring until we arrived, the game had kicked off five minutes late, so we actually only missed the first fifteen minutes.
Admission money was taking but an old fellow at the gate, who struggled to understand a word I said, you would think the Geordie accent would be easy to comprehend from our Scottish neighbours, the fact being that Scotsman are basically Geordies anyway, but with their brains knocked out!
After the game we headed back to the city centre, Jamie parked his car back home, then we headed to the Guilford Arms for a couple of pints (Stewards 80 shilling and Edinburgh no.3) which was choccablock with egg chasing fans watching the Rugby Union international between Scotland and Ireland, which kicked off at 5pm.
I boarded the 1730 back to Newcastle, content on a successful trip, visiting two new grounds at both SPL and Non-League level, a good mixture of seeing football at opposite ends of the scale, an excellent day out in the Scottish capital, mission accomplished - my Edinburgh double complete.