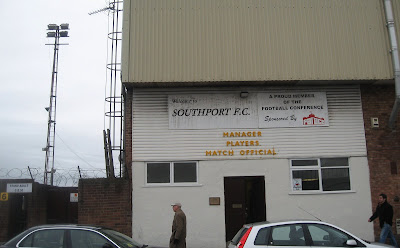 Southport is historically a part of Lancashire, a seaside town within the Metropolitan Borough of Sefton in Merseyside. The resort is located on the coast of the Irish Sea and possesses the second longest pleasure pier in Britain, as well as the picturesque shopping area on Lord Street, which was once the home of Napoleon III of France.
Originally a rugby club, football was formed in 1881 as Southport Central, originally playing at the Sussex Sports Ground for three years before moving to Scarisbrick End Road. In 1889 they became founder members of the Lancashire League, winning the title in 1902-03. The following season they joined the newly formed Lancashire Combination, winning it’s Second Division, before again becoming founder members of another new league - the Central League in 1911.
The club had a brief name change, becoming Southport Vulcan in 1918, one of the first known clubs to have a sponsored name after being bought by the Vulcan Motor Company.
Southport played in the Football League from the formation of Division Three North in 1921 until narrowly losing out to Wigan Athletic when applying for re-election in 1978. During their Football League years the club were placed in Division Four in 1958-59, twice winning promotion to Division Three, peaking at 8th position in 1968-69. Their second relegation came in 1973-74, then within four years their League career which spanned over fifty seasons was over, it was third time unlucky in the re-election stakes, after finishing 23rd three seasons running.
The Sandgrounders swapped places with Wigan, dropping into the Northern Premier League, which they won in 1992-93. Ten seasons in the Conference ended with relegation back to the NPL, but the following year the reconstruction of the pyramid placed them in the Conference North, becoming the very first league champions in 2004-05.
Last season Southport found themselves back in the Conference North, relegated after only two seasons in the Conference, missing out on an instant return after losing in the play offs to Stalybridge Celtic on penalties. This season they’re currently in the play-off positions, battling for the title with Tamworth, AFC Telford and of course current leaders Gateshead.
In 1905 Southport moved from Scarisbrick New Road, taking with them the grandstand which had originally been purchased from the Southport Flower Show, and re-erecting it at there new home at Ash Lane. In 1921 the stand was extended to a 2,000 capacity, with a wooden covered terrace also added at the opposite side, the same year the ground took its name from Earl Haig, now officially known as Haig Avenue.
The small wooden cover was replaced after two years, but lasted only five years after suffering extensive damage due to a gale, work continued with stands added at the Scarisbrick Road End, Blowick End, and more shelter added which eventually gave cover to 12,000 customers. In 1932 Haig Avenue hosted that seasons eventual cup winners, the mighty Newcastle United, which saw a record crowd of 20,010 for an FA Cup Fourth Round Replay.
In 1966 the original stand was burned down, the day after a Boxing Day clash with Wrexham in 1966, replaced 2 years later by the current Grandstand. The terraces were closed in the 1970’s and replaced when the clubs fortunes turned around in the 1990’s. New terracing was added to the Popular Side and the Blowick End, with a new covered terrace at the Scarisbrick Road End, later further extension work took the ground to its current capacity of just over 6,000.
The Grandstand is a cantilever structure, with a capacity of 1,184 light blue flip seats, there’s stairway access and toilets situated at the side of the stand, flagged by two thin floodlight pylons with extra lights on the roof of the stand.
The Jack Carr Stand has a very smart appearance, named in honour of the club’s former president, it sits parallel with the 18 yard box, its yellow frame has the stands name along the roof’s frontage.
The other two sides are uncovered terracing, the Blowich End is the away section, the Popular Side has four floodlight pylons which were installed in 1961, both sections have yellow and black crash barriers which make an otherwise boring section of terracing more pleasing on the eye. 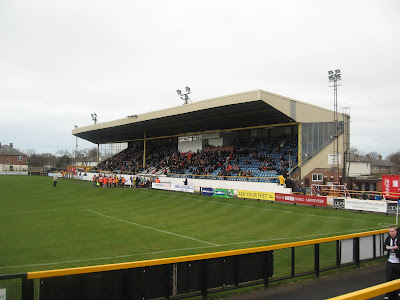 When it comes to seeing your team win football matches, winning games can fall into different categories, you could enjoy; good hidings, routine wins, scrappy wins, jammy wins and best of all - famous victories. Today’s game doesn’t fall into any of those categories, it’s one of those “ Can’t believe we’ve won because I thought we were dead and buried” type games, as that was my post match reaction after a pulsating ninety minutes.
The opening half was quite tense with not many clear cut chances, Gateshead keeping it tight, playing a 4-5-1 system, packing the midfield and stifling any threat from the home side, that was until the 38th minute, when Michael Powell who appeared to be offside, had the easy task of tapping in from 6yds out, with the Gateshead defence making the mistake of not playing to the referee’s whistle.
The introduction of Graeme Armstrong at the start of the second half saw Gateshead revert to their usual 4-4-2, it was his superb cross which set up Lee Novak at the far post to nod home the equaliser on 66 minutes.
Southport regained the lead on 72 minutes, when a long throw in was headed clear falling to Steve Daly on the edge of the box, his sweeping first time shot beating Provett at his right hand post.
As we approached the final quarter of an hour, I felt Southport had taking the three points, they were looking stronger and nothing seemed to be coming off for The Tynesiders, but then with ten minutes remaining the turning point of the game. Armstrong was brought down on what looked like the edge of the box, however the referee disagreed, pointing to the spot, much to the annoyance to the Southport players with Davis booked for the foul and Lee for protesting about the decision.
Novak made no mistake with the penalty(see picture) and with the bit between their teeth the Heed went all out for a winner, which arrived with four minutes left on the clock. A defensive mistake from Lee let in Wayne Phillips, who let the ball bounce in front of him before unleashing a ferocious volley which gave the keeper no chance. My reaction to the goal was…well …I just went totally potty! I cannot recollect the last time I greeted a goal with such delight and uncontrollable fervour.
As I‘ve mentioned, I thought we were down and out, but we somehow managed to wrestle a victory from the jaws of defeat! The final whistle was greeted with jubilant celebration on the Blowich End Terrace, a fantastic win and a truly great day for the Heed Army! 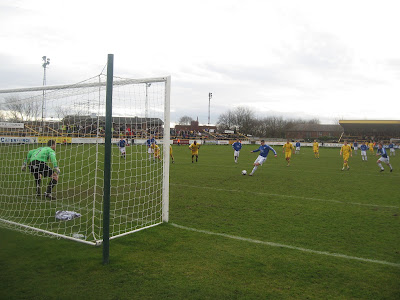 When the scheduled matches in the Conference North were published in the summer, Southport(away) was one of the first fixture I looked for, being a ground I wanted to ‘tick’ and town I’ve never visited. Little did I know, or expect, that by the time this match came around, it would turn out to be such a crucial game at the top of the table, a preverbal ‘six-pointer’ as football clichés go.
Like quite a few of the Heed Army, I had planned to visit Southport for the weekend, taking the rest of the Smudger’s with me, however finances dictated otherwise, instead I travelled by “executive” Mini- bus, departing from the Civic Centre at 9.30am.
An accident earlier that morning on the A1, meant a large section of the motorway was closed. putting an extra hour onto our journey, meaning a later than expected arrival time of 1.30pm. We then headed straight to Lord Street, which was a good mile away, a twenty minute walk from the ground. We found the rest of the lads in the Willow Grove pub, where we made up for lost time, supping four swift pints before jumping a very cheap taxi back to Haig Avenue at 2.30pm.
I arrived at the ground and called into the club shop, then the Grandstand Bar, being at the right place at the right time, handed an unwanted fresh pint of John Smiths, which I gratefully accepted from Dave Curtis.
We arranged a departure time of 5.30pm, so after the game we returned to the bar, where there was real ale on offer - Southport Grandstand Gold - which wasn’t a bad pint. I also called back into the club shop to seek out 100FGC squad #42 Rob Urwin. I found Rob’s breadknife Julia in the shop and she managed to locate her hubby, who looked totally gutted with the result, admittedly conceding the title to Gateshead and confessing that Southport’s title credentials are almost gone.
Special thanks to Rob for giving myself and the website a mention in his ‘From the Editor’ section of the match programme, as well as asking me for a contribution, with my article appearing in the ‘A View From The Other Side’ section of the magazine, I even autographed a copy on the way home!
This win kept Gateshead at the top of the pack, extending the lead over Southport to 12 points although The Sandgrounders still have five games in hand. I’ve mentioned how winning games can be categorised, on reflection I think this match can be tagged into the ‘famous victories’ envelope, because if Gateshead do go on and win the title this season, this excellent result will be looked upon as the definitive day of the season. 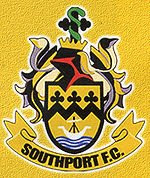 Saw the tailback of traffic on the A1 as we headed in the other direction Shaun. Another on the A19 meant a slightly later arrival for us at your mate's place on Wearside.

Thanks for an excellent record of what must be one of the most memorable day for every Gateshead supporter.