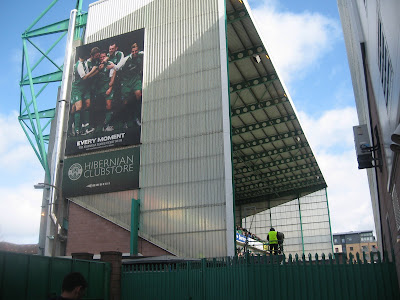 Hibernian FC became Scotland’s first major club of Irish birth in August 1875, formed by the local Irish population based at St. Patrick’s Roman Catholic Church in Cowgate. The club name originates from Hibernia, the Latin name for Ireland, their creation led to the outset of other Irish clubs, most notably another team in green and white based in Glasgow.
Hibs originally ground shared after their formation, playing at the Meadows, a park towards the south end of the city, until moving to Leith and the first Easter Road; Hibernian Park on Bothwell Street in 1880. The club had to disband in 1891 after losing their ground to developers as well as most of their squad to Celtic, until reforming two years later just a goal-kick away from their former home.
The new Easter Road opened in February 1893, later after the club won their first championship in 1903 they almost moved to a new ground in Piershill, until finally settling at Easter Road, signing a 25 year lease in 1922, this gave way for the first major building work, which including erecting a main stand and banking elevated on the other three sides.
The East Terrace was expanded after a record gate of 65,840 for the Edinburgh derby with Hearts in 1950 and four years later Hibs became one of the first clubs to erect corner floodlight pylons in contrast to the more popular roof-mounted style lights, which stood until being replaced in 1995.
Easter Road remained largely unchanged through the following decades, apart from a steel and concrete roof build on to the North Terrace in 1960 and later bench seats added in 1982, however Hibs became the first club in Scotland to install undersoil heating in 1980.
In 1985 the capacity was reduce to under 24,000 with the reduction of the East Terrace with a basic cover added, then by the end of the decade over a £1m was spent on essential improvements including six executive boxes added to the Main Stand.
Following the Taylor Report, the deadline for all-seater stadiums in the SPL was set for August 1994, this forced the club to install temporary seating on the South Terrace, bringing the capacity down to just 13,500, however by the end of the year plans were drawn up to increase the capacity with brand new stands behind each goal.

The North Stand and South Stands are similar in stature, steep with two sections of green seats with the top tiers curving inwards at a 45 degree angle in one corner. The North Stand is know as The Famous Five Stand and has a capacity of 3,864, with the South Stand which is designated for away supporters, slightly larger at 3,962. The stands exterior has large green tubular steel ties and cross braces, this with it’s white walls shows off the clubs colours.
The West Stand was build in 2001,it has a capacity of 6,500 and replaced the old Main Stand, this has two tiers of green seats with a section of dark grey seats located centrally at the top tier. The stand has a large perspex strip at the back and similar to the stands behind the goals, the sides are perspex walls, allowing plenty of natural light into the stadium.
The East Stand is now all seated with a capacity of 4,223, made up of 20 rows of bucket seats on concrete blocks, the stand has a green roof with the TV gantry perched on the top, there are plans afoot for future redevelopment of the east side of the stadium, which will complete the rebuilt Easter Road. 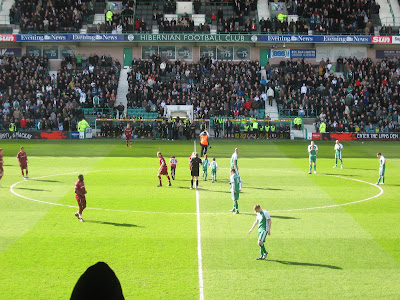 The game got off to a lively start with Hearts having the better of the early exchanges, however it was Hibs who had the first serious effort on goal, Riordan cut inside from the left flank before unleashing a right foot shot from over 30 yards out, smacking back off the corner of the crossbar.
Hibs took the lead in the 17th minute, a fine cross field pass from Rosa, found O’Brien with lots of space on the right wing, his cross was met by Fletcher, with what I would describe as a “shampoo effort” coming off head and shoulder, before looping over Balogh into the net.
As we approached half time Hibs had a golden chance to double their lead, a fine through ball found Fletcher with only the goalkeeper to beat, both players raced towards the loose ball with the striker winning the race only to be cynically fouled by the keeper, which resulted in a red card for Balogh. The extra man advantage lasted only a matter of minutes, a reckless tackle on Nade by Bamba in stoppage time meant we went into the break with 10-a-side.
The second half was finally balanced and the result could have gone either way. Hibs had chances to double their lead with efforts from Hogg and a gold gilded chance for Fletcher, who was clean through with only the goalkeeper to beat, however he didn’t produce a Torres type finish, instead it was an Ameobi like effort, as sub McDonald produced a fine save to keep Hearts in the game.
Hearts went all out for an equaliser in the closing stages, Nade almost did the trick but saw his header come back off the crossbar, apart from that effort the Hibs defence held firm, with Szamotulski not troubled and Rob Jones commanding at the back.
The final whistle was greeted with celebration and relieve, as the green and white side of Edinburgh celebrated victory and reclaimed local bragging rights, the hostilities are due to get back under way at Tynecastle at the end of the season, but first Hibs have to hang on to their top six position before the end of season split 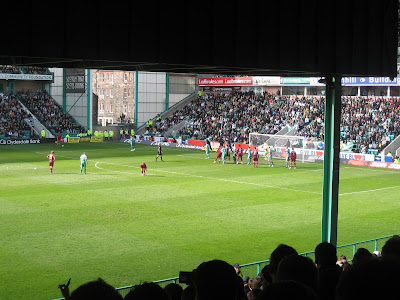 I arrived in Edinburgh at 1130, arranging to watch the game with 100FGC squad#81 Jamie McQueen. The game was a 12.30k.o. so we headed straight to the stadium, taking a look around the perimeter of the ground and savouring the pre-match atmosphere.
The match was a typical derby, full of incident and passion and I enjoyed the occasion. We had seats in the East Stand, seats that weren’t used for your backside but for your feet, as everyone stood up on their seat to sing throughout the game. I found myself amongst a cauldron of hate, as you would imagine Hibs aren’t too fussed on Hearts, and just like any other derby match, the Hibees fans made their feelings known towards their bitter rivals. Amongst all the animosity, the only bit of love I witnessed in the East Stand was in the interior roof, where two pigeons were celebrating the mating season taking part in a bit of the old ‘in-out-in-out!’ before flying off across the field and out of the stadium.
After all these years I’m pleased to have finally visited ‘The Leith San Siro’ it seems that whenever I’m in the Scottish capital, Hibs are always playing away from home. Last season I made an attempt to finally complete my ‘tick’ only to find that their SPL clash with Gretna postponed on arrival at the ground, which meant having to spend the afternoon in many of the city’s pubs. (every cloud and that!)
After that disappointment I vowed not to return to Easter Road unless I could do an Edinburgh double, pairing Hibs with an East of Scotland League match. There was three viable options to choose from, Tynecastle FC and Leith Athletic were both at home, but I decided on one of the Kings Cup 2nd Round ties, so after the Edinburgh Derby, Jamie and I legged it to his car and drove over to the west end of town to Saughton Enclosure, the home of Lothian Thistle. 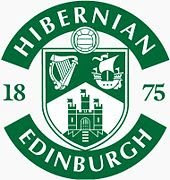 Great pictures again, its a shame Hearts couldn't put on more of a show for you though!