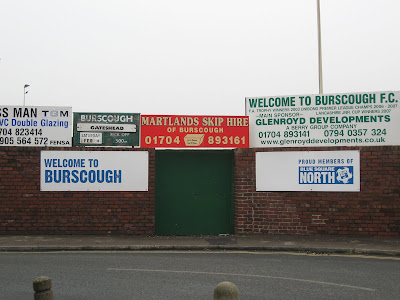 Burscough is a village in West Lancashire, on the main Liverpool to Ormskirk Road, which was originally developed from two local farming villages, the name derives from Viking speak - Burh-skogr meaning ‘fortress in the woods
The present Burscough FC was formed in 1946, although football in the village stems way back to 1880. The first club played for 20 years in the Liverpool & District League, then in 1905 the successful Burscough Rangers were formed, winning three Liverpool Combination County league titles in the 1920’s. The club went on the play in the Lancashire Combination, but couldn’t repeat their earlier success and after running into financial troubles, folded in 1935.
The Linnets won many cup honours in their formative years, including three pots in 1947-48 season and their first Liverpool Combination County title two seasons later. In 1953-54 they joined the Lancashire Combination, winning the Division Two title and notching 155 goals in their first season, then adding the Division One title only two years later.
After a second league title in 1969-70, the club joined the Cheshire League the following season, at the end of the decade they reached the First Round proper of the FA Cup three times in four years, including a tie against Sheffield United in front of 14,000 at Bramall Lane in 1979.
The club has the accolade of becoming the first title winners of the North Western Counties League in its primary season in 1982-83, then after finishing runner up in 1997-98, joined the Northern Premier League Division One, again promotion to it’s Premier Division was achieved after only two seasons.
The greatest day in the clubs history came on May 18th 2003, becoming the smallest club to win the FA Trophy, a twelve game cup run, including knocking out Football League bound Yeovil Town, culminated in an unforgettable 2-1 win over Tamworth at Villa Park.
After going close in the Northern Premier League, reaching the play-offs and also recording a 3-2 win over League One Gillingham in the FA Cup, Burscough achieved promotion to the Conference North after winning the Unibond Premier League in 2006-07, they then finished a credible 8th last season.
Victoria Park is found on Bobby Langton Way, named after the locally born former England winger, who’s career included spells at Blackburn Rovers, Bolton Wanderers and Preston North End.
Football has been played on land close by at Mart Lane since the early 20th century, but it wasn’t until 1921 that the current site came into existence. In 1926 the club purchased the Bullen Road Stand from Everton, transporting it by train and steam lorry, with volunteered labour building the 400 seated grandstand. After the Bradford Fire it was replaced by a new structure, which was opened in August 1986, the stand originally had 250 seats, with more seats later added to meet the required grading to host Conference North football. The work in March 2008 increased the overall capacity to 3,054, around this time the floodlights were also upgraded, which were first installed in 1972.
Opposite the Main Stand is the Crabtree Lane End, built in 1994 it gives cover to 500 spectators, there’s also a smaller covered terrace at the far goal, parallel with the 6yard box, both stands are connected with five steps of temporary meccanno type terracing, which is also featured behind the nearside goal.
The turnstiles are on Bobby Langton Way, next to the clubhouse, called ‘The Baron Club’ which isn’t the same Baron Club which some of you may be familiar with, which is the 4th best club in Hull and is owned by Paul & Tony Baron, where the compare is Kinky John, with security supplied by Carl and Chris.
Victoria Park celebrated it’s 100th birthday last year, the record attendance stands at 4,798, which was recorded against Wigan Athletic, for an FA Cup tie in 1950-51 season. The ground is currently (using Groundtastic lingo) on amber, as the club are planning to move a short distance to a community based sports complex, adjacent to the current ground. 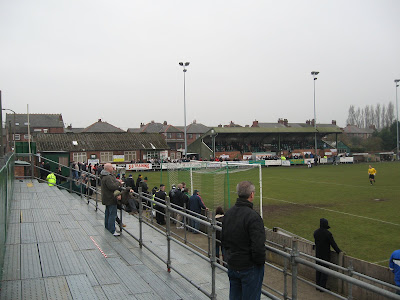 We set off for Burscough at 10.30am, I travelled shotgun with Captain Carter, with the back seats taking up by Paul and Ray, arriving at the ground before 1.30pm, naturally a few pints at a couple of the locals followed, namely the ‘Waterfront’ and ‘The Bridge’ prior to kick-off.
Our Heed Army Captain and chauffeur had a bad feeling about the game, after 13 matches Burscough have yet to taste league success at Victoria Park this season, there’s always the fear that they must win one sometime, and we could be the ones to break their duck, however there was no need to be so concerned, as Gateshead blitz into a three goal lead in the first 10 minutes.
Gateshead made the ideal start, when a Harwood cross found Phillips at the back stick, catching the ball on the half volley with only 4 minutes gone, then five minutes later a Turnbull free kick fell to Harwood, who had time and space to pick his spot and double the lead. Novak made it 3-0 a minute later, after beating the offside trap, he raced through on goal before unleashing a fierce right foot shot into the corner of the net. Gateshead were unlucky not to add to their lead before half time, Armstrong harshly had a goal ruled out and a penalty appeal was turned down after a blatant handball.
Heed took there foot of the gas in the second half, the home side improved and reduced the arrears on the hour, when a Stanford free kick crept in under Musselwhite’s body. Phillips got his second goal of the afternoon, although he didn’t know much about it, going in for a 50-50 ball which somehow rebounded off his head, spinning into the net via the crossbar.
Gateshead created more good chances to add to their tally, but it was Burscough who grabbed the final goal of the game, with a volley from Parry ten minutes from time, which was little more than a consolation and continued their search for that elusive first home win. 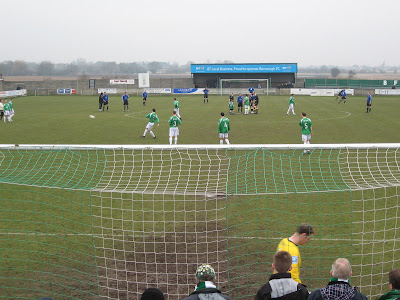 Throughout the game, the lads received score updates via text message, involving the other sides at the top of the Conference North, among those were fans of league leaders Tamworth, who had been ringing/texting earlier in the day, trying to wind us up saying; well to put it in a more polite and printable term; We’re not as good as what they are!
Well, all I can say on this matter is the league table doesn’t lie, I know Gateshead have played more games than our rivals, but we’re not dropping many points (last dozen games - W 10 D 1 L 1) while the teams around us continue to slip up. I don’t know how long we‘ll be top of the league, maybe it’ll be for one week only, but we’ll make the most of it and enjoy it while it lasts, especially seeing our( and our rivals) constant reminder on Sky Sports News. 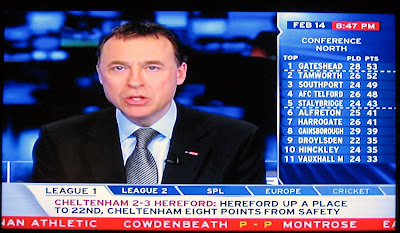 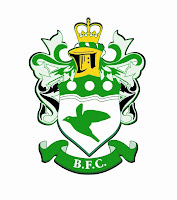 Well done to Tony(Captain Carter) back at the hoose for 7.30pm.