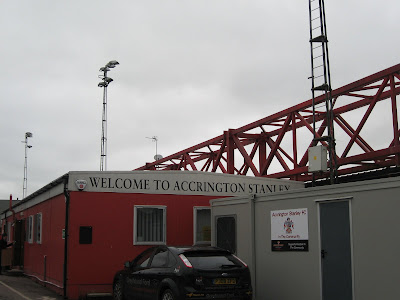 Accrington is a town in the Hyndburn district of Lancashire, as common place in this part of the country, it’s former industrial roots were in the cotton and textile industries. “Accy” is also famed for producing the hardest building bricks in the world - “The Accrington Nori” which have been used in the construction of the Empire State Building and the foundations of Blackpool Tower.
The first football club in the town were Accrington FC, one of the original twelve founder members of the Football League in 1888, before resigning after only five years. Another team in the town already existed called Stanley Villa, taking their name from the clubs headquarters at the Stanley Arms on Stanley Street. After Accrington FC folded Stanley Villa took the town name becoming Accrington Stanley.
They originally played in the Lancashire Combination, until League Football returned to the town in 1921 as original members of Division Three North, where they twice finishing runners up in 1954-55 and 1957-58. When the League got rid of the north/south divide Stanley were placed in League Division Three in 1958. Two seasons later they were relegated, then in 1961-62 resigned from the League, playing their last game on 2nd March 1962. The club played on for a couple more seasons in the Lancashire Combination until eventually calling it a day in 1966.
The resurrected Accrington Stanley FC was formed in 1968, the club having remarkably rising through the football pyramid and back into the Football League. They began playing competitive football again in 1970, returning to the Lanc Combo, until progressing as founder members through three leagues; the Cheshire League, North West Counties League, then the Northern Premier Division One in 1987. The Reds became Northern Premier League champions in 2002-03 and thus promotion to the Conference, where they didn’t stick around for long, winning the title in only their third season in 2005-06.

The original club played at Peel Park which in it’s heyday held 20,000 including an impressive Spion Kop and seated stands on either side. When the club reformed they applied for permission to play there, but unfortunately a huge fire to the Main Stand in 1972 led to the grounds demise and put pay to the clubs return.
The Crown Ground is currently called the Fraser Eagle Stadium, and was built on the site of an old clay pit, used by works team Ewbanks when the reformed Stanley first began playing there. In those days the ground only possessed a small pavilion, used as changing rooms and clubhouse purposes, with a wooden fenced enclosure. In 1989 a new changing room block was built and the pavillion was replaced with a new seated stand.
The ground looked much better than I expected, the shallow Whinney Hill Terrace, with it’s rickety looking corrugated iron roof the only part which still looks like it belongs to a non league ground. There’s terraces behind each goal, the vocal home support gather in the covered Clayton End, which is now known as the Sophia Khan Stand. At the opposite end the Coppice Terrace is mainly unemployed, apart from a small section in the corner for away fans. A not so chirpy cockney complained about this fact, unhappy he was unable to stand directly behind the goal, saying it was a disgrace that there was only two home spectators standing on that terrace, before the steward informed him that the terrace isn’t used and those two spectators were in fact the ball boys. Away supporters have no need to complain, at least Accrington are kind enough to offer cover to its visitors, giving them half of the Whinney Hill Terrace.
The seated area of the ground is two separate stands, broken up by the team dugouts, which aren’t the traditional style boxes, but four rows of seats for both teams divided by a wall. The Main Stand is slightly bigger than the Thwaites Stand, both have red flip seats with ASFC picked out in white in the Main Stand, which also houses a kiddies section next to the players entrance(no tunnel) in the near corner. The young’uns sang throughout the game, with those youthful tones reminiscing of the caterwaul at those old schoolboy internationals at Wembley.
The ground is finished off by the red tubular steel supports which appear on top of the covered stands, they somehow give the ground a more attractive look, accessorizing with the red crash barriers and seats. The current capacity is 5,050 which only 1200 are seats, however this may have to change with the Football League criteria set at 2,000 seats within 3 years of become a League Club, so changes will have to be made to bring the Crown Ground up to the required standards. 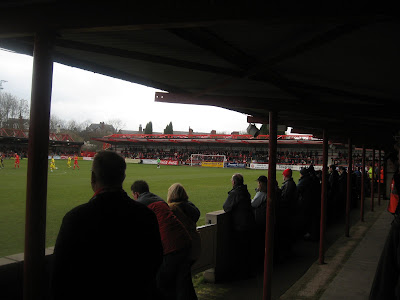 The players entered the field at the start of both halves to The Jam’s ‘Town Called Malice’ a fine selection indeed and a single I bought in both 7’ and 12’ editions on it’s day of release in February ‘82, reaching number one in the ‘Hit Parade’ the following week. I doubt that three lads from Woking have any connection to this tiny Lancashire town, which means it gets played because of a link to the song title, but is Accrington such a troubled town? - or is it reference to the clubs malicious past? - I don’t think it’s neither, they probably just recognise it as a bloody good song and a top tune!
It’s always disappointing to go to a game which finishes goalless, but I’m not one of those sad sack groundhoppers who doesn’t count 0-0’s and does a revisit until a goal is witnessed. The teams did produced an open entertaining affair, both missing several good chances with the majority of those falling to the home side. Lindfield and a young Dean Saunders lookalikey -John Paul Kissock went close, with the best chance of the first half coming from Paul Mullen, whose thunderous volley rattled off the crossbar.
Dagenham had a good spell in the second period, but failed to take advantage, lacking a cutting edge in front of goal. Stanley finished strongly missing a couple of one-on-one situations until winning a penalty in the 90th minute after a hand ball from Okuonghae. Veteran Daggers keeper Tony Roberts capped his 400th club appearance by saving Andy Procter’s spot kick, giving his side a share of the spoils. 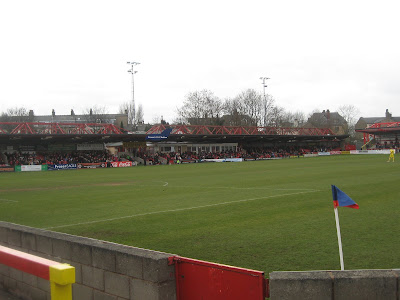 I booked train tickets in early January for my planned trip to Accrington, however my ‘current’ employees are trying their best to mess up ‘My Matchdays’ telling the staff just last week that we now start one hour later on Saturday‘s, which means a later start and a later finish. Thankfully I was assisted by my loyal (and maybe soon to be former) workmates and I made the 11am National Express train from Central Station to York, without any problems.
The train journey to Accrington was a long slog across country, finally arriving in the town at 2.05pm.
I arranged to meet up with Squad#34 David Poole aka ‘The Groundhog’ who was giving an owed “ day out pass” having missed out on a trip to Hereford a fortnight ago to see his beloved Brighton & Hove Albion. He was joined by his mate Martin(a ‘Citeh’ fan) and we arranged to meet up for a bevvy in The Abbey before the game. I arrived at the pub to find they hadn’t arrived but instead found a couple of blokes sporting Chelsea away shirts watching their heroes on the box away at Aston Villa. I stood next to them at the bar and was surprised to hear they had thick Lancashire accents, obviously part of the new breed of Chelsea supporter.
I received a text message from David, informing me they couldn’t find the pub and they were in The Black Horse , so I asked one of the Chelsea lads and he gave me directions, being only a short distance away. After another quick pint we headed to the ground, The Groundhog had travelled by car so I was able to get a lift to the ground and back to the train station after the game.
My train journey back to York went by more quickly after falling asleep, I called in to the Coopers pub in the station, only because I didn’t have much time to venture elsewhere. I had an extortionately priced pint of Davenports Bitter, which was nice but I’m promising myself never to return to this pub, I’ve never liked the place, I’d rather do without a bevvy than come back in here again.
I caught the train back to Newcastle at 1955 and was alarmed to find the train infested with drunken yobs, there was bottles and cans lying all over the place, with no consideration and much annoyence to the other passengers. So I ignored that lot and put my i-pod on at full blast and kept myself to myself until reaching the safety haven of Tyneside.
I purposely wrote this piece without any reference to the one thing that Accrington Stanley have been infamously linked with for a number of years, no clichés or puns regarding that unmentionable burden on a historical club. I’ve did my usual matchday write up, which covers my day out, a description of the ground and a brief history of the club, that’s just in case you were unaware of their background - so now do you know who they are? ...EXACTLY!