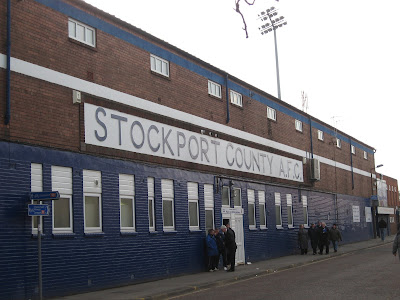 Stockport is a large town six miles south-east of the City of Manchester and lies on the River Mersey, meaning County are the nearest League club to the famous old river (and you thought it was some Premier League club!)
The town is traditionally know for its manufacturing of hemp and rope, it also produced one of the first mechanised silk factories in the UK, in the 18th century. By the following century the towns main industry was cotton and the country’s capital of hat making, exporting over 6 million hats a year. 1997 saw the end of the hatting industry, but the towns heritage is still maintained at the ‘Hat Works - The Museum of Hatting’ which I unfortunately didn’t get a chance to visit, due to being unable to get out of the pubs!
Stockport County were originally formed as Heaton Norris Rovers in 1883, playing at the Recreation Ground in the Combination and then the Lancashire League. The club lead a nomad existence playing the following season at Heaton Norris Wanderers Cricket Ground, before moving onto Chorltons Farm, when they merged with local rivals Heaton Norris. They then relocated, relocated, relocated to Ash Inn Ground, Wilkesfield, until moving to their first enclosed ground at the Nursery Inn on Green Lane, where the players built a 4000 strong wooden stand and changed their name to Stockport County.
The Hatters became a Football League club in 1900, two years later they moved to their seventh ground -Edgeley Park, which had been in existence since 1891, being home to Stockport Rugby Club.
The following year the rugby club folded, the same year as the grounds first development; a roof added to the Popular Side with a capacity of 1400. This side of the ground was well named, as it once housed 16,000 for a 5th Round FA Cup against Liverpool, when the ground witnessed it’s record gate of 27,833 in 1950, the same decade floodlights were installed and opened with a friendly in 1956 against Fortuna 54 Geleen. In 1954 the roof was extended forwards, then renamed the Barlow Stand in honour of club chairman Ernest Barlow. By 1978 the capacity was halved, then in 1994 became all seated, now with a capacity 2,411 of a single tier split into five sections, with one section designated to away supporters.
The Main Stand was built in 1936, a year after the original timber structure (erected in 1913) was destroyed by fire, along with the club records and a dozen houses on the other side of Harcastle Road.
The stand has a classic look, with it’s sharp triangle roof covering 2,000, which includes executive and sponsors seats, it sits on the half way line with the end filled in with separate buildings to either side, including entrance to the conference and banqueting suite.
The Railway End was always an uncovered terrace with a 6,000 capacity up until 1985, when the terrace was cut down by a third. In 2001 the addition of seats completed Edgeley Park as an all-seated ground, it’s used by the away fans, so naturally it’s the only part of the ground without cover, there’s also an electric scoreboard situated at the back of the stand.
The original Cheadle End was a small timber stand with cover for 3,000, when first built in 1923. Seats were added in 1967, but as a result of the Bradford Fire it was demolished, unsafe due to its tarred and felted roof and replaced by a concrete terrace. The new Cheadle End stand was opened in 1995, and is a steep two tier stand with a capacity of over 5,000, like to rest of the ground it has blue flip seats, with the bottom tier having SCFC picked out in white.
We chose to sit in the Cheadle End, underneath the stand is a spacious concourse, decked out with a blue carpet and club colours and the Connor Bar named after County legend Jack Connor. There is a few TV’s in this area, but it seems no remote control, as there was a member of staff walking round with a broom handle switching channels. My only disappointment about the stand was that there was no bookies, as I really fancied backing County to win 3-1, thankfully they scored that fourth goal.
The ground (as it was in the beginning) is shared with rugby, the home of Guinness Premiership club Sale Sharks and is owned by the Stockport County Supporters Trust, which was formed in 2002. 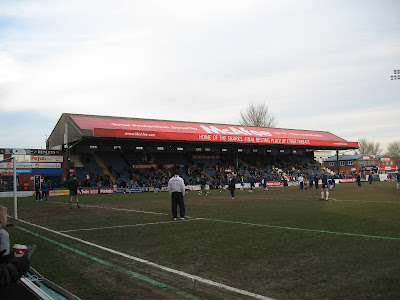 County overcame what’s been a difficult week with a convincing win over Hereford United, two defeats and increasing press speculation regarding the club’s current financial situation were forgotten for the time being as The Hatters got off to a dream star with a goal straight from the kick off. Dominic Blizzard capitalised on a defensive error, then coolly slotting the ball past the keeper with only 13 seconds on the clock.
Hereford drew level midway through the first half with a goal from ManU loanee Sam Hewson, finishing off a good move, but County regained the lead before half time, McNeil with a simple diving header in the six yard box from a corner kick.
Stockport made their dominance count in the second half, a good finish by Mainwaring on 52 minutes, and then McSweeney, shooting through a crowded penalty area capped off a good performance. 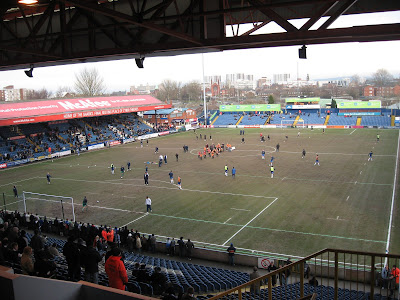 Edgeley Park is a ground I’ve been wanting to tick for quite a while now, it’s in a perfect town centre location, not too far from the railway station, which means I don’t have to hotfoot a couple of eight minute miles to catch my train.
I departed Newcastle at 9am, on my five quid single fare train to Doncaster. I arrived by 1030 and caught my connection to Stockport, arriving just before noon. After grabbing a late breakfast at a café which overlooks the market place, I needed something to wash it down, so I naturally visited a couple of the local hostelries. There was plenty to choose from, but I selected ’The Calvert Court’ and ‘The Pack Horse’ before again meeting up with 100FGC squad#93 Dan Gooch, his girlfriend Sam(visiting her 37th ground of the season) and squad#109 Paul Hodkinson at the Grade II listed ‘Arden Arms’ (details on Bevvy Almanac)
We headed over to Edgeley Park at around 2pm, we were all impressed by the ground and enjoyed an entertaining game with a praiseworthy performance from our hosts.
My train home wasn’t due until 17.28, so I had time for a swift pint on my way to the station, we noticed plenty of bars on Castle Street which is in between the ground and rail station. I don’t know how it came about, maybe it was because it looked quite quaint from the outside, but we selected ‘The Pineapple’ as our post match alehouse of choice. How would I describe this pub? Let’s just say the words -Avoid, as F**k, Rough, come to mind. I left The Pineapple at 1720, saying my farewell to my ground hopping friends and wishing them the best of luck in getting out of the pub alive.
The return train journey home went smoothly, I made a short detour to ‘The Leopard’ pub, next to the train station in Donny, before arriving home at 9pm. I received several txt messages from Dan, informing me that their safety was assured and they’d visited more pubs in Castle Street before catching a later train.
Edgeley Park turned out to be my 200th ground, I’ve been stuck in the 190’s for what seems an eternity, a bit like a cricketer at the crease on the verge of his double century, but then growing frustrated as the clouds darkened and the covers come out, unable to hit the few remaining winning runs. Compared to others who share this groundbagging hobby, this isn’t much of a milestone, however I’m pleased a classic ground like Edgeley Park, turned out to be the venue which finally completed my second ton. 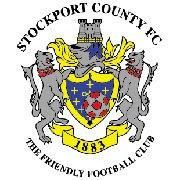 Many thanks to Dan for perfectly capturing the scoreboard 200 picture.

Well done on getting to 200!
You seem to be picking up a few more league ones this season.
Where are you off to next?

Hi David,
I'm off to Accrington Stanley on the 21st Feb (one you havent done yet!)and maybe MK Dons on the 28th Feb (another one you haven't done yet ;-))

Smid,
Yeah, alright, alright. Don't rub it in! I'd love to join you at Accrington, though I might have difficulty getting a day-out pass. I'm a bit gutted about MK Dons - I was all set to go to watch Brighton there on 4th April but we're going to Wales that day on holiday. I may have to make do with Llangefni on a sneaky Tuesday night instead!
How many current league grounds are you on now? I'm on 76 (he said licking his finger and stroking the air)

Well..erm..Dave,
You can view my grounds elsewhere on the website if you really need to know!

Well, I beat you both to Accrington, so there!

We played them their last game in the Conference, and got to see the trophy presented after the game. Decent piece of silverware it is too.

Ground was nothing special, to be honest, but the club shop did a classy tea-towel emblazoned with the ASFC logo!