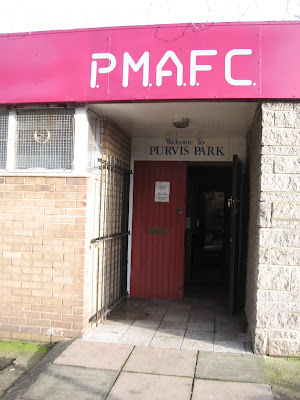 I hadn’t planned another Alliance ground this season, my usual ’Around the Alliance’ articles finished for this term, however a 11am Saturday morning kick-off was too good to miss out on, tailor made for groundhoppers to bag a welcome double.
Many groundhoppers took advantage of this early start, travelling from far flung parts of the country, then heading off to a Northern League game and some further north to Scotland. The reason the match kicked off early was the Gosforth lads were off to York for a stag-do, with one of their players about to 'tie the knot', and Percy Main being the helpful club they are, agreed to an early start.
This year Percy Main Amateurs celebrate their 90th birthday, having been formed by ex-servicemen returning from the First World War. They began life playing in the Northern Amateur League, becoming champions in their first season before adding four consecutive titles during the 1920’s. The club’s proud history includes a quarter-final appearance in the FA Amateur Cup in 1929-30, losing out to eventual winners Bournemouth Gasworks Athletic after knocking out Cleethorpes Town, Rawmarsh Welfare and Yorkshire Amateurs. The club joined the Tyneside Amateur League in 1931, before returned to the Northern Amateur League after the Second World War.
The Villagers joined the Northern Alliance in 1968, adding cup honours in the Northumberland Amateur Cup, Northern Alliance League Cup and the Northumberland Senior Bowl, before becoming title winners in consecutive years in ‘81 and ‘82 and runners up in 82-83, the same season they reached the 5th round of the FA Vase, going out to Brandon United.
The club suffered relegation in 1991 to Division One, but won promotion by the end of the decade, adding the League Cup in their first season back in the Premier, The Villagers are currently back in Alliance One after relegation in 2004-05. 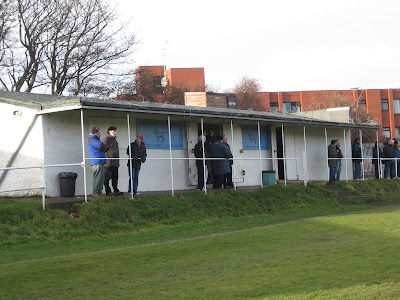 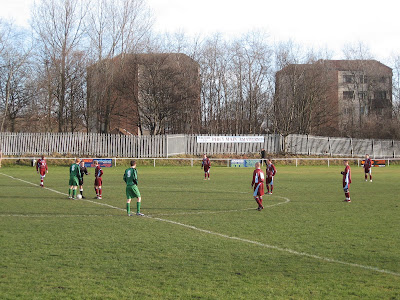 Percy Main is a village in North Tyneside, on the outskirts of North Shields. Purvis Park takes its name in honour of the late Ian Purvis, who served the club as a player, secretary and chairman over 50 years. The ground was originally called Middle Row Park until 1996 and neighbours with the local cricket club, entrance is gained through the pavilion building, which incorporates the changing rooms and tea bar, which serves delicious hot soup at 60p a cup. Access pitch side is gained through the back of the building, which has an extended roof, giving spectators valuable cover.
Those travellers who set off early, (which including the first arrival from Hampshire who had departed at 4.30am) were treated to an entertaining game, the early kick-off didn’t cause a lethargic display, as both teams looked up for it. 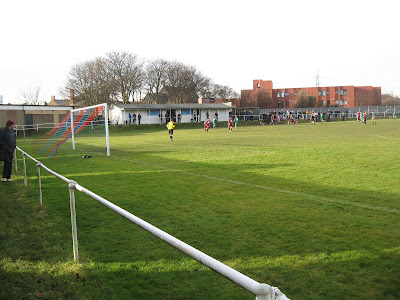 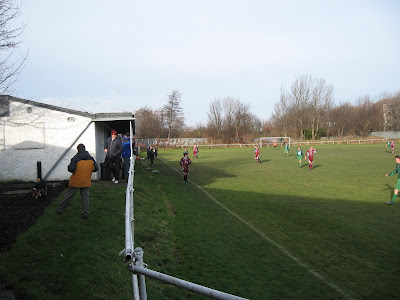 Bohs took the lead half way through the first half, a point blank save from the keeper was tipped on to the bar, but Atkin was alert to force the ball over the line with an acrobatic-type-kick. Percy pushed for an equaliser, missing several good opportunities, then in first half injury time Gosforth doubled their lead, Atkin again netting another rebound after another good save, this time from a tight angle.
Percy Main must have got a good rollicking at half time, scoring with their first attack of the half, Betts with a cracking shot from 20yds which gave the keeper no chance. This gave the team a lift and it was just a matter of time before they equalised, this duly arrived on 70 minutes, Percy Mains very own miniature version of Rory Delap; Pierre-Luc Coiffait fired in another bullet throw which eventually fell to McEnany who fired home with his right foot. The teams fought out the final twenty minutes in search of a winner, but after over 100 minutes(51 minutes each way!) of football the draw was a fair result in the end.
The early kick-off was definitely a success for Percy Main, mainly thanks to club secretary Norman De Bruin who made Groundhoppers aware via the internet, on Tony Kempster’s forum and Non League Zone. Hopefully other clubs in the region will take note and follow Percy Main’s example, to give the country’s groundhoppers an excuse and opportunity to visit, where without doubt... is the best region of the country. 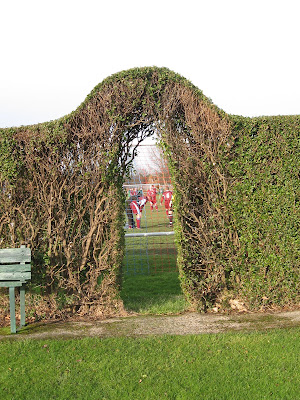 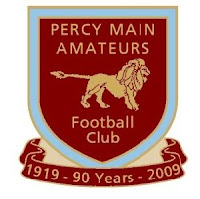 I should have come down after all Shaun. Pitch was frozen this morning. Glad Persy Mains decision to go for an 11am kick off attracted a good crowd.

Whats going on at the Heed!! Top spot in sight.

Must also mention, it was good to bump into squad#72 Tim Grimshaw at the game, armed with his camera, taking his usual 'Hounds Round The Grounds' pics!

Aye Jamie, it's going well at the Heed, we've got just as good a chance as any for promotion.