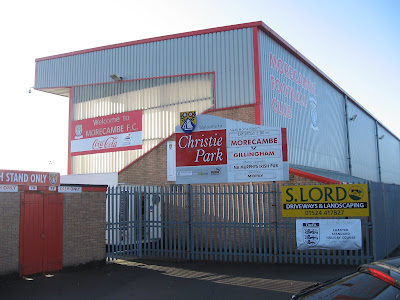 Morecambe is a Lancashire seaside resort off the Irish Sea within the City of Lancaster. In 1889 the villages of Bare, Poulton-le-Sands and Torrisholme became communally known as Morecambe, with the three villages still maintaining their own identity and original names.
Morecambe FC formed in 1920, playing their first season in the Lancashire Combination League whilst sharing the towns cricket ground at Woodhill Lane. The club moved to their own ground the following year, thanks to the financial backing of retired businessman and supporters club president Joseph Barnes Christie, who acquired land to rent on Lancaster Road.
The ground was then know as Roseberry Park, originally having a 700 capacity wooden stand, dressing rooms and a covered end known as the ‘Scratching Shed’ with the ground’s first league action played in August 1921, against coastal neighbours Fleetwood, in front of a healthy crowd of 3,500, with similar sized crowds maintained during their first season.
The ground was renamed Christie Park in January 1928, honouring Mr Christie who was now the club president, he formed the club into a limited company with a share capital of £1,000. He purchased the ground and gave it to the Corporation of Morecambe on the condition that it could be only used by Morecambe FC, and should the club ever disband it should become a children’s playground, sadly the clubs great supporter and benefactor died the following year.
The grounds steady progress began with cinder banking added to the Lancaster Road end with a covered concrete stand at the town end in the late 1950’s costing £2,000. Another £4,000 was spent on installing floodlights at the turn of the next decade. The Main Stand was built in 1962, at a cost of £20,000 as part of major ground improvements totalling £35,000, the same year as the ground witnessed it’s record gate, 9,383 for a 3rd Round FA Cup tie against Weymouth, then in 1968 the old fans favourite the ‘scratching shed’ was demolished to make way for a new covered terrace at the Christie Avenue end.
In 1967-68 they were Lancashire Combination champions for a fifth time, and the following season became original members of the Northern Premier League. The Shrimps made little impact in the new division, but glory came in the FA Trophy, the biggest day in their Non-League history saw a 2-1 victory over Dartford in the 1974 final at Wembley.
The clubs ambition to rise up the pyramid began with more ground improvements during the 1990’s which included new floodlights and grass banking replaced by concrete terracing, their desire was fulfilled when in 1994-95 they joined the Conference after finishing runners-up to Marine in the Northern Premier League.
In 1997 a new £560,000 stand was built at the town end with major improvements made to the South Stand bringing Christie Park up to Football League standards. League football was eventually accomplished, following play-off semi finals defeats in 2002-03 to Dagenham & Redbridge, then three years later to Hereford, it was third time lucky in 2006-07, after disposing of York City in the semis they went on to beat Exeter City 2-1 in the first Conference Final to be played at the new Wembley.
Last season the club comfortably maintained their newly found league status, finishing in 11th position with sixty points, season highlights including League Cup victories away at Preston North End and Wolves. 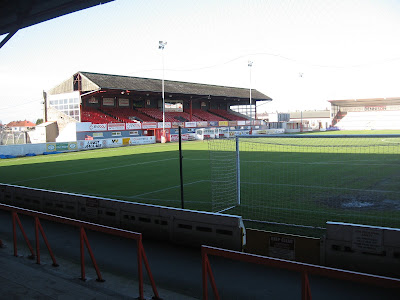 Christie Park has a capacity of 6,400, the Main Stand has a traditional old fashioned look to it, sitting perched on the half way line with 1200 red flip seats, with a wee small standing section at the front. The dugouts are situated centrally in front of the stand with the players tunnel further along towards the south side, with a small stand to cater for disabled supporters towards the north end.
The North Stand terrace looks brand new, spick-and-span with bright red crash barriers, opposite is the away end, a smaller terrace with a police control box situated centrally, the back walls are painted battleship grey, covering the wording of the previous sponsors name. The Car Wash Terrace is the only uncovered part of the ground, a shallow terrace which is broken up by the scaffold assembled TV gantry and four thin floodlight pylons.
Eric & Ernie’s rendition of ‘Bring Me Sunshine’ greeted the two teams, but the match didn’t produce many bright spots, with Gillingham taking all three points courtesy of a first half strike from Curtis Weston. The Gills started the better side and almost took the lead when a Mulligan shot hit the post, then on 19 minutes the same player was again denied by the woodwork, but this time Weston was on hand to net the rebound. The Shrimps pushed for an equaliser in the second half, but overall lacked that extra spark in front of goal, with the best effort coming from Stanley, which produced a brilliant save from Royce. Gillingham looked to grab a second goal on the break and defended well as the conditions worsened, holding on to claim victory. 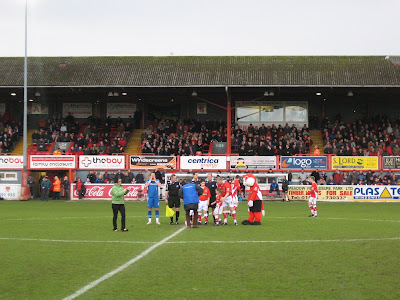 I travelled to Morecambe by car, chauffeured by Alan Price(100FGC squad#26) along with his wife Karen(squad#126) and Dave Edwards(squad#52) setting off at 9am.
We stopped off in Lancaster city, taking a look at the home of the Dolly Blues (My Matchday planned for 10th April) then arrived in Morecambe at around 11.30am, heading straight to the ground. We purchased some goods from the club shop, then luckily found that the ground gates were open, meaning we could have a pre-match preview of Christie Park, taking a leisurely walk around the stadium and take some decent photographs.
We then headed into the town centre to see the statue of the towns favourite son Eric Morecambe, before heading off for something to eat. Alan had already researched where the towns best chippy was, the honour going to Atkinsons, found in a side street off Marine Road West (they’ve also got a chippy next to the ground) after enjoying the delicious haddock & chips on the seafront, I was thirsty for some decent ale, so I headed off on a pub crawl and arranged to meet back up later on.
The first pub I visited was named after the great man himself, Eric Bartholomew (JD Wetherspoons), followed by the towns oldest pub the ‘Smugglers Den’ and finally the York Hotel on Lancaster Road, the closest pub to the ground. (Full details on Bevvy Almanac)
I prefer to stand at the match, so with it being a dry day I opted for the Car Wash Terrace, standing on the half way line close to the action just like being at a Non-League match, I later regretted not choosing the North Stand, as it lashed down in the last twenty minutes, so I got a right drenching!
I enjoyed visiting Morecambe and look forward to returning, the club have announced plans to move to a new purpose built stadium in the Westgate area of the town. The new ground will have a capacity of 6,800(2,100 seats), the project also includes training facilities, hotel, drive-through-restaurant and car park facilities, which should be up and running by the start of 2010-11 season.
We made good time heading back home, arriving back at 7.30pm, with Mr. Price’s rendition of ‘Bring Me Sunshine’ an added bonus (well maybe not!) to our journey back north, overall a brilliant day out or as the legend Mr Morecambe would have wisely put it "Wah-hey! "
LINKS
Match Report
100FGC visits- Tims 92 (Sept’07) The Groundhog (Dec’08)
Bevvy Almanac - ‘Revisiting Eric’

An email from the star of the show - Alan Price;

Shaun: Enjoyed the read about Morecambe - except for the criticism of my singing! I just thought it was an apt way to finish the day, and it ain't easy to sing a capella. I didn't hear anyone else trying, so it's a fact that no-one did better. And some of us were playing a blinder, bringing the car over a stormy Stainmore, while others were in dreamland, sleeping off their overindulgence. That detail didn't get a mention, I notice!

Thank you very much Alan for your fine performance behind the wheel, it's very much appreciated, just as much as your singing is!
SS