Around the Alliance - part four 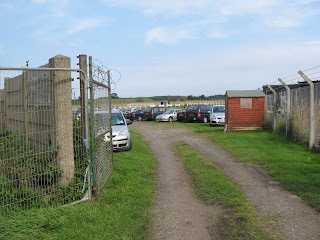 Seaton Delaval is a village in the Blyth Valley district, five miles north-west of Whitley Bay in south-east Northumberland.
Seaton Delaval Amateurs joined the Northern Alliance in 1983-84 and have won the championship twice; in 1989-90 and 1992-93. In 1994 the club merged with Seaton Delaval Seaton Terrace, who had been originally formed as High Pit Social in 1981, before changing their name the following year.
The ground is off the A192, and was a bit difficult to find, hidden behind a plot of allotments with no signpost on the main road. I managed to catch a glimpse of a crossbar, so doubled back into a small lane which leads to the ground, where a man standing next to a small hut was waiting to take your quid admission.
Car park spaces are providing behind the nearside goal to the entrance, where you park up facing towards the pitch, meaning you don’t need to leave your vehicle to watch the game, making it another one of those drive-in football venues.
There’s a wooden enclosed terrace, the blue painted roof overhanging from the changing rooms out parallel with the dugouts. There’s terraced steps running towards the near corner flag, and towards the opposite flank is the outside toilet block which was feature in The Football Bog Blog #12. There is uncovered hard standing all around, with a old dugout on the far side used by spectators for extra shelter with a grass bank running pitch length, giving a better elevated view.
Delaval ran out worthy winners, with the game being over as a contest after 50 minutes when Howes made it 3-0, after earlier efforts from firstly Arnos, who caught out the keeper with a well placed lob and then Baird adding to the scoring with a nice half volley, capping a fine first half performance from the home side.
The last half hour was all Heddon, but all they could muster was a solitary reply from John Dunn who capitalised on a defensive error, finishing with a well taking effort, the win took Seaton Deleval top for the first time this season and they’ve remained in contention for the title since.
Overall Wheatridge Park is a tidy little ground, the only main fault being no signposts and no identity inside, as in a ‘welcome’ sign of some sort. However I would recommend it’s worth a visit during the winter months, so you can enjoy the game from the shelter and warm of your car 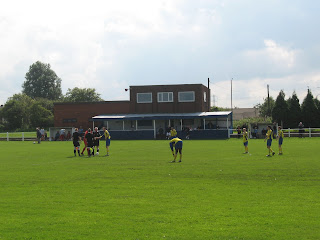 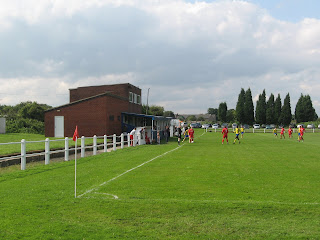 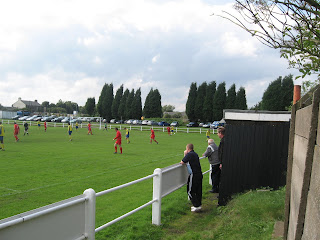 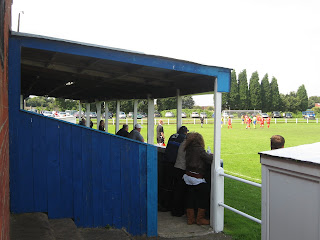 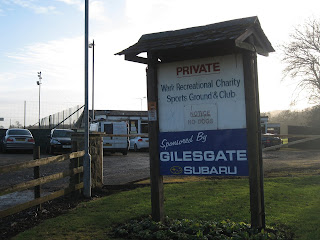 Wark is a small village and civil parish located twelve miles north-west of Hexham in Tynedale, west Northumberland, on the west bank of the River North Tyne
The club became members of the Northern Alliance in 1988, two successive relegation in 1995 and 1996 saw them hit the bottom division, they won promotion to Division One in 1998-99 and then last season won promotion back to the Alliance Premier, winning the league with 25 wins out of 30 and scoring 125 goals. Further research on the club was difficult to find, Google results constantly took me to the career of former Ipswich and Liverpool goal scoring Scottish midfielder John Wark.
On arrival you drive through the village, along Main Street which brings you to a single lane weak road bridge, where the Wark Sports Club is at the other side of the river. The ground is situated in the most tranquil of settings, where the only noises to be heard is the baa of sheep in the next field, the calming sound of the river flowing by and the odd tractor going to and from the neighbouring farm.
The Sports Club entrance has a spacious car park, where there’s an entrance to the clubhouse and changing facilities which share the same building block with also access at pitch side and is situated to
the right corner of the pitch. On the left side is a children’s park, a netball court and what must be a football ground first; a skateboard park, which runs parallel to the goal and the corner flag. There’s a pair of brick dugouts at one side and a white perimeter fence, with one side roped off to open up the cricket pitch.
I arrived at the ground at 1pm, with the Amble team still to arrive, then a quarter of an hour later a convoy of five cars crossed the aforementioned bridge, with players spilling out of the vehicles, with just enough time to get changed and warm up.
Wark controlled this League Cup tie from the kick off, missing an array of chance, as if they were determined NOT to score, when the goal finally did arrive on 42 minutes, it was worth the wait, a long clearance found Nixon, who struck a sweet shot on the turn from 20 yards out.
Wark continued to dominate the game after the interval, with further goals from Telfer and a second for Nixon, this time from the penalty spot after he was dragged down in the box, making a final score of 3-0, however Amble can count themselves lucky it wasn’t a heavier defeat.
During the game there was a few bad tackles, with one in the opening minute of the game setting the tone for the rest of the afternoon, ten minutes from time a bad tackle caught one of the Wark lads, everyone knew it was a broken leg straight away, the game was halted and an ambulance had to be called, best wishes to the lad and I hope he’s on the mend soon.
I can highly recommend a visit to Wark, I travelled over after finishing work (meaning I went from work to Wark) and with it being an early kick off I was a bit strapped for time, meaning I couldn‘t stop for a pint and a visit to the GBG listed Battlesteads Hotel at the entrance to the village, which looked a convivial spot and another good reason to make Wark a laudable ‘tick’ 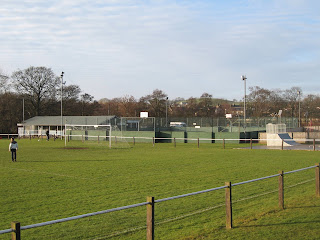 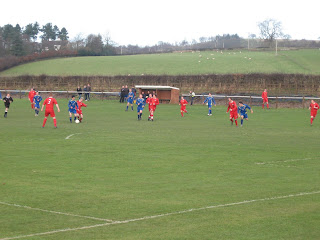 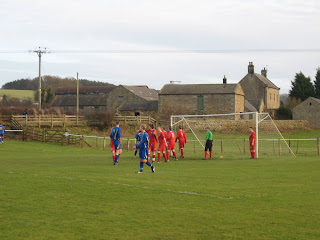 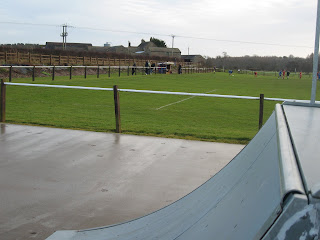 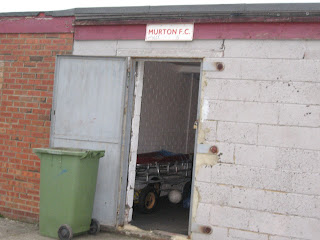 Murton is a former mining village in County Durham, located six miles east of Durham and seven miles south of sunderland, and forms part of the local government District of Easington.
The club was formed as Murton Colliery Welfare in 1912, becoming Wearside League members the following year, winning the championship twice in 1928-29 and 1936-37. In 1946 they joined the re-formed North Eastern League but returned to the Wearside League five years later, adding another title in 1959-60. In 1988 they joined the Northern League and also dropped the CW suffix from their name, winning the Division Two title in only their second season. Their best performance was finishing second in 1991-92, but after relegation in ‘98 the clubs fortunes nosedived, finally losing their Northern League status, joining the Northern Alliance in 2004-05. Further relegation followed but last season they regained there place in the Alliance Premier after finishing runners-up to Wark.
Recreation Park has cover behind the dugouts and behind the left hand goal, both stands are of similar stature, made from congregated iron and both looking on their last legs, as if a strong gust of wind will see them collapse like a pack of cards. Both stands have a white wall at the front with the stand behind the goal set back from the pitch on top of a slope. Next to the main stand there’s a building block which incorporates the changing rooms and refreshment area.
The ground is surrounded by a cricket pitch, the welfare park and another football pitch where I saw a cracking second goal by local side Hylton in their 3-0 win over Seaham, during the half time interval.
The match was a local derby between the only two Northern Alliance Premier clubs based in County Durham this season. Peterlee took an early lead through Pyle, but were reduced to ten men when the second scuffle in the space of five minutes saw their number 10 sent off, which was a bit more than ‘handbags’ with raised hands and threatening behaviour, this gave Murton the edge and they grabbed an equaliser before half time with a goal from Summerbell.
There was a slight delay early in the second half, in the first minute a wayward pass struck the referee on the leg and he went down needing treatment, the ball wasn’t exactly blasted off him, but he acted as if it was something serious, after a few minutes he finally got on his feet and restarted the game, the whole episode making him look nothing more than a prize soft shite!
Murton made the extra man count in the second half, with a second goal by Summerbell and further goals by Garside with a fine individual effort, and a last minute goal from substitute Walton completed the rout.
Recreation Park could do with a bit work, as it seems to have been left to wreck and ruin, the surrounding Welfare Park and cricket ground seem nice enough but the football ground looks neglected and dishevelled. After being a victim of repeated vandalism and arson throughout the years I suppose it’s like urinating against the wind as far as ground improvements are concerned, which is a shame considering it’s less than five years ago that they were a Northern League club. 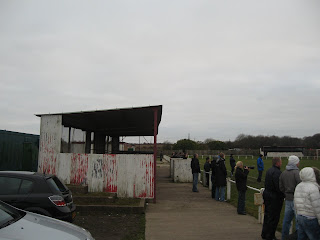 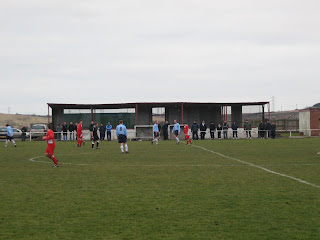 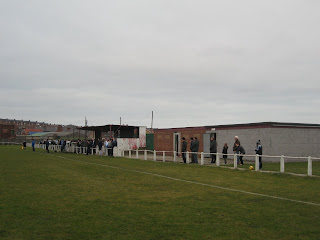 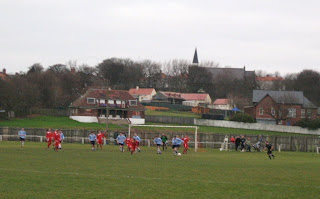 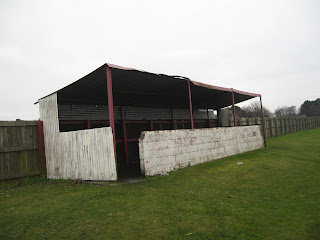 Hi Shaun,
The grounds in the Alliance look to have picturesque backdrops - they certainly look more appealing than the step 7 league we have here in staffordshire! Maybe it's just very stylish photography!
I notice you have Morecambe penciled in for 17th January. I recommend it highly. Make sure you go to the chippy outside the ground and the pub just up the road. Details are on my post. Are you up for Edgar Street on 7th February? Or failing that me and the owds (Uncle Don and Cyril) are going to watch Stocksbridge some time soon.