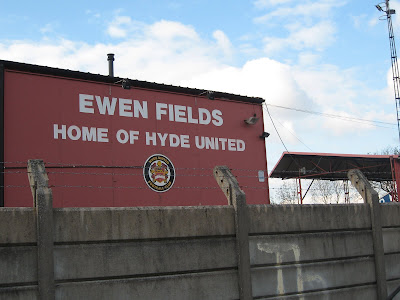 Hyde is a town in Greater Manchester, within the Metropolitan Borough of Tameside, the town was built on the success of the cotton mills during the Industrial Revolution of the late 18th and early part of the 19th century. The name derives from the word “hide” meaning a measure of land of approximately 120 acres, which was used for taxation purposes.
The town’s first club; Hyde FC, were formed in 1885 and are forever confined to the record books, losing 26-0 to Preston North End in the FA Cup in 1887, a record score for a competitive match in England. Aside from that blimp, the club were successful, winning four league titles in five seasons within three different leagues between 1897 and 1902, with more silverware in various local cup competitions. The club first played at Ewen Fields when merging with Hyde St. Georges in 1906, but were eventually forced to fold during the war, playing their last game in February 1917.
Hyde United were formed in 1919, making their competitive bow in the Manchester League the following year, winning the title five times and the Gylcryst Cup twice over the next decade. In 1930 they joined the Cheshire League, after the war United enjoyed a successful period, winning the Cheshire Cup and then in 1954-55, they won the Cheshire League and cup double and also retained the title the following season.
In 1968 they were founder members of the Northern Premier League, but rejoined the Cheshire League after only two years, but eventually returning via promotion after winning their third league title in 1981-82. The Tigers finished the 1980’s close to major honours, twice finishing runners-up in the league and just missing out on a trip to Wembley, losing to Telford United in the semi-finals of the FA Trophy in 1989, a feat which they repeated in 1996, this time Northwich Victoria denied them a trip to the old twin towers.
In 2001-02 the club escaped relegation due to other clubs failure to require necessary ground grading, however this proved to be a reprieve, as they finishing bottom the following season. The club rebuilt a new side and won back to back promotions over the following two seasons, taking there place in the Conference North in 2005-06, where so far they’ve made steady progress finishing 11th, 8th and last season 9th. 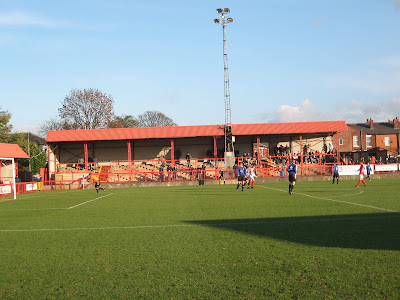 Ewen Fields is a fine looking ground, covered on all four sides, decked out in blood red with an unique looking stand. The turnstiles are found at the far end of the car park. where the Pennine Stand and the a covered paddock terrace called ‘The Scratching Sheds’ are found on entering. The clubhouse is in the corner which also has the club shop in a separate room inside.
The Pennine Stand has a capacity of 550 red seats, at the back there’s a press box and sponsors lounge, the floodlight pylons tower on top and it’s an extra £2 to have the privilege of sitting in the stand, hence under 40 people amongst the 300 crowd took up the option, the refreshment bar is situated at the back of the stand opposite the turnstiles.
The Scratching Sheds is the more popular standing area for the Hyde supporters, the shed is split with a floodlight pylon running through it. There’s a covered terrace at the far side, where the dugouts are also located, behind each goal there’s more covered terracing, with the congregated iron roof s having evident dints, due to wayward shots smacking off its frontage.
An opening fifteen minute blitz from recent signing Lee Novak set Gateshead on their way to an impressive victory over their Tameside hosts. The hat trick came in the space of four minutes(surely some kind of record) the first arrived on 11 minutes, good work from Phillips set up Armstrong, whose shot was saved, but Novak followed up to net the rebound. Minutes later it was two, this time it was Harwood who did the donkey work allowing the striker a simple tap in, the treble was complete in the 15th minute, Armstrong was fouled on the edge of the box and Novak made no mistake from the spot.
Hyde got back into the game midway through the first half, a low cross was deflected in by Simm, the linesman judged the ball had crossed the line, much to the annoyance of the Gateshead defence, which resulted in a couple of yellow cards. The MC at the ground then announced the goalscorer and added “The comeback is on” how wrong he was, as Novak score his and the Heed’s fourth five minutes before the interval, with a point blank header after a great cross from Francis.
Gateshead added to their tally in the 54th minute, this time Novak was the provider, after staying onside he ran on before laying the ball into the path of Harwood, who was left with the easy task of sliding the ball into an open goal. Hyde had more possession during the last half an hour, with the game over Gateshead eased off, so the Tigers grabbed a consolation through Cartwright, poking the ball into the net after a scramble in the box from an initial corner kick. Overall a great away day performance from Gateshead and especially Lee Novak, the front partnership with Graeme Armstrong looks promising and the signs are good for the second half of the season 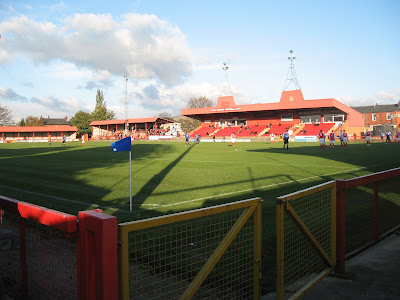 The original planned coach trip was cancelled due to lack of numbers, meaning a replacement mini-bus and a couple of car excursions. I had the option of either, but plumped for a lift off ‘The Olympic Torch’ which meant I had more chance of a kip on the way home, much needed after being at work earlier and the effects of a good pre-match bevy.
We left at 10.15am, the other car spaces with ‘Torchy Travel’ taking up by Kav, Hewey and Bible Mike, amongst the many non-football topics discussed during our journey were;
A) The X-Factor debate -‘Who would you go with between Cheryl and Danni?
B) Girls Aloud - Who would you most like to do in 1-5 order?
We briefly stop off at services on the M62, meeting up with the rest of the Heed Army and also had a chat with a few ex-Gateshead players who had arrived with Durham City FC, who were playing away at Marine in the FA Trophy.
We arrived in Hyde before 1.30pm, I headed straight into the town centre, where I was disappointed to find that the JD Wetherspoons pub ‘The Cotton Bale’ only had three ales on offer in their International Real Ale Festival, I tried all three then headed off to the ‘Sportsman’ on Moltram Road, which is a very friendly pub and can recommended a visit. They serve a fine selection of Pennine Ales from the local Rossendale Brewery, when I entered the pub they gave me a free thirst-quencher of ‘Floral Dance’ and very nice it was too.
After checking out the football results and a pint in the clubhouse, we headed off home with the ‘Torchymobile’ having us back by 7.45pm. I again enjoyed visiting this part of the north-west, Ewen Fields is a very good ground to visit, the town centre is only a short 5-10 minute walk away, with plenty of pubs close by, however the day was that bit more extra special, seeing a 5-2 away win and the Heed giving Hyde a bloody good hyde-ing!
For the record;
A) Definitely Cheryl.
B) 1.Kimberley 2.Cheryl 3.Nadine 4.Sarah 5.Nicola