The second part of my trips around the Wearside League, where I visited a new club, the return of a former Wearside League side and one of the leagues longest established clubs. The three games provided plenty of entertainment and produced 15 goals. 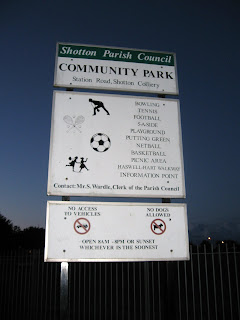 East Durham United are a newly formed club, admitted into the Wearside League last season, finishing 17th,when they ground shared with Northern Alliance club Murton. This season they've relocated 6 miles east to the Shotton Recreation Ground, home of defunct Northern League club Shotton Comrades, in the County Durham village of Shotton Colliery.
Now known as Shotton Park, the ground is found on Station Road, where the car park is at the entrance to Shotton Community Park, which you have to walk through to gain access to the ground at the top of the hill.
The changing rooms are found in a separate building opposite the ground entrance, so the players use the same gate as the supporters as access into the ground from behind the goal, once inside there’s the refreshment bar and toilets to your left and a small section of built up terracing to the right and hard standing on all four sides. There’s a covered terrace at the park side, which originally had benched seats when the Comrades played here, while opposite the dugouts look quite unique. There’s just one large block which is share between home and away teams, when the match was on it looked chocablock, the dark orange roof is the same style as the stand. The ground looks well maintained and is well lit with six tall twin lamp pylons.
I had a choice of staying at home watching Champions League on the box or venturing out on a chilly early autumn evening, to bag a new ground and watch some local non-league action, there’s no doubt, I had made the right choice. Teesside Athletic brought a few of their regular followers and the teenagers who I had earlier passed hanging around the park, doing their usual adolescent stuff, looking bored, playing with their mobiles, while the ones who were coupled up did a spot of ‘necking on’, swelled the attendance by coming into the ground for kick-off time.
Teesside took an early lead on eight minutes when Bell volleyed the ball into an empty net from outside the box after a poor clearance from the keeper, then just after the half hour, the game looked to be heading Athletics’ way, when Thompson had an easy tap-in after a good cross from the right flank.
Then a crazy six minutes leading up to half time, a lifeline for United when a corner kick was sliced into his own net by Wood and minutes later it was level, Kane getting on the end of a free kick wide from the edge of the box. East Durham’s joy was short lived as Teesside regained the advantage, Hunter nodding home virtually on the goal line from an initial corner kick, but the half ended all square, when a foul on Kane allowed Wells to make no mistake from the penalty spot.
After a well earned breather for the players and spectators, I was greedy for more goals after witnessing six in the first half, but I had to settle for one solitary goal in the second half, this went to the visitors on the hour mark, when a fine run and cross fell to Kensington, who got in front of the defender to slide the ball home. Both teams continued to create chances, but Teesside held the advantage, adding to United’s frustrations by booting the ball out of the ground at every opportunity and comfortably holding on to take the three points.
It’s good to see Shotton Park getting used again, two good teams produced a great game so I was pleased to be in attendance, so much better than staying at home watching that inferior Champions League rubbish methinks. 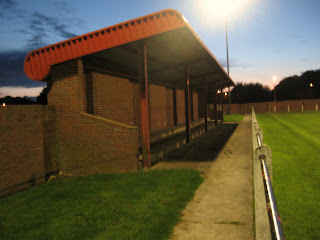 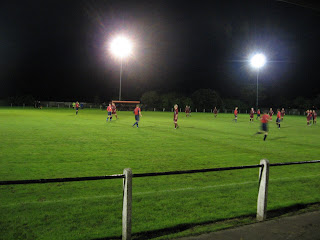 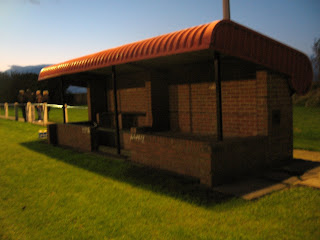 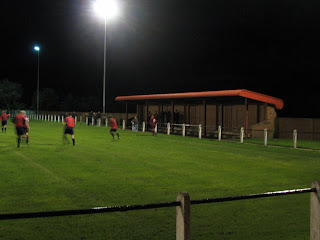 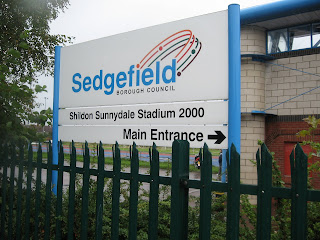 Newton Aycliffe is a town in County Durham within the Sedgefield constituency, which was founded in 1947 and is the oldest ‘new town’ in England. The towns football club have returned to the Wearside League this season after a 15 year absence, stepping up from the Durham Alliance, the club originally played in the league for ten years until they resigned mid season in 1993-94.
Newton Aycliffe’s temporary home is the Sunnydale Leisure Centre in Shildon, while developing work continues at their Moor Lane ground, this fact made this ‘tick’ a priority while I still had the chance to visit before the club moved back home.
The Leisure Centre is just outside Shildon on Middridge Lane, with the 2000 stadium found on the opposite side of the road. The ground has an eight lane running track and a decent stand, with blue frames and supports and six rows of red flip seats, with ‘2000’ picked out in blue, its capacity is approximately 300, with a small standing section at the front. The perimeter of the pitch is roped off, giving you a closer view, so your not too far from the action, which is usually the case at athletics stadiums. The changing rooms are in the pavilion building, which is to the far left of the stand parallel to the corner flag, there’s no refreshments available, apart from a hot drinks machine across the road in the Leisure Centre.
In damp windy conditions, the match saw the Wearside League’s two newest clubs met in the opening round of the Monkwearmouth Charity Cup, the weather had a hand in the opening goal, a wide free kick from 30 yards out, by Kirby’s Damon Cox, missed everyone and bounced high into the net with an assist from the swirling wind. Minutes later the home team equalised, McMullen played a one-two, before side footing the ball into the corner with his right foot. Aycliffe dominated the rest of the first half, missing several good chances and were unlucky not to have a handsome lead.
After 15 minutes the game came to a standstill, the officials held lengthy discussions with the dugouts, apparently one of the linesman had pulled a calf muscle and couldn’t continue, so unless someone stepped in the match would be abandoned, thankfully a lad from the Newton Aycliffe bench reluctantly took the flag, meaning the game could continue and I wouldn’t lose out on getting a new ground to my list.
Kirbymoorside took the lead against the run of play on 67 minutes, a scramble in the box eventually fell to Sarjo Cham, who slid in to score. The game swung to and fro with both teams missing sitters, but NA became more dominant and finally equalised on 82 minutes, left back Campbell ventured forward and his cross come shot found the far right corner.
The game looked to be heading for extra time, something I wasn’t pleased about, the game had kicked off at 2pm, I had an appointment in Newcastle at 4.30pm, so this meant the disappointment of having to miss out on the extra 30 minutes, things personally got worse when a serious tackle and a bad injury meant a lot of added on time.
During the game a lad on the Kirbymoorside bench, was constantly warming up, hoping to get on and show what he could do, the lad was; to put it politely..a bit of ‘a poseur’ he had some sort of hairdo going on, the likes of I’ve never seen before and was the only player on show wearing gloves. He got on after about 70 minutes and didn’t make much of an impact, apart from the inconvenience of getting his sparkling all-white strip dirty. It was approaching 3.55pm, so I unfortunately had to get going, so I began to exit the stand., just then the Kirby right winger was making a strong run forward and managed to get a decent cross into the box, then appearing from nowhere was said player, with a fantastic diving header; Uyi Ehima. What a player! What a goal! Brilliant! The referee blew the whistle as soon as the game restarted, so I was happy I saw the whole game, all thanks to a tremendous goal from the lad with the hair and gloves! 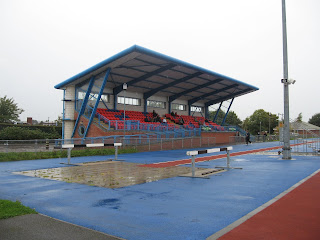 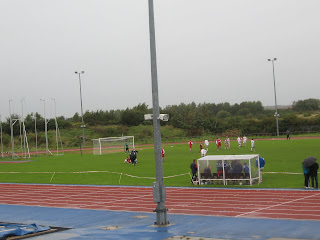 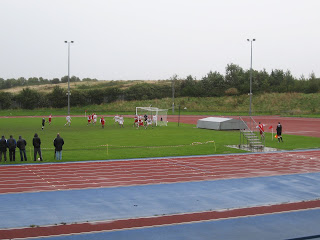 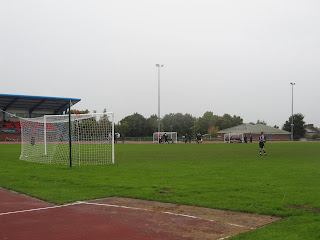 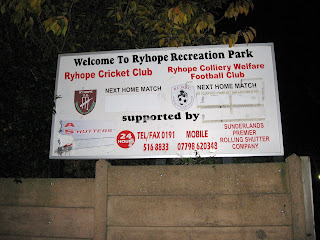 Ryhope is a coastal village 3 miles south of Sunderland town centre, on the southern tip of the town borough. The word Ryhope originates from Old English speak; reof hoppas which translates as “rough valley”
Ryhope CW rejoined the Wearside League in the 1950’s, their most successful period coming the following decade when they won the league on three occasions and added another four trophies within the league’s cups competitions. In 1988 they merged with Sporting Club Vaux, renamed as Vaux Ryhope until reverting back to their original name in 1992.
When approaching on the main B1286 road which runs through the village, the ground was easy to spot, eight tall pylons lit up the night sky making it clearly visible, I then just had to work out how to get there, as it’s tucked within a housing estate. I noticed a few cars parked off the main road, so followed suit and found the entrance to the park within a side street.
A short walk through the recreation park, past the tennis courts and around the Ryhope Cricket Club’s pitch, led to the football ground. The clubhouse is outside the entrance gate, which is more like a café, with an array of tables and chairs, serving hot food and a proper cup of tea - out of a pot and in a mug, you can also view the game from the window inside, but you have to move the net curtains first.
Inside the ground , on the nearside there’s a changing room block to the left, with a hard standing terrace and dugouts to the right, these are basically a large aluminium cupboard, which can be closed and locked up when not in use. The other three sides are grassed standing, with the only cover coming via an old Perspex dugout on the far side.
After an even but goalless first half, Ryhope started the second period looking more positive, taking the lead after only five minutes, when the Kirby keeper’s trailing leg tripped up the striker. After arguing with the referee and receiving a yellow card for dissent, he had no chance with the spot kick converted by Hill. The lead was brief, two minutes later a long ball from the right back to the far post was met by Alexandra** with a towering header which gave the keeper no chance, he jumped so high that it looked(from my angle) that he jumped higher than the crossbar, so it wasn’t a surprise that the forward received an injury from his long fall back to earth. The match winning arrived on 74 minutes, a great run and cross from the right winger, picking out a perfect pass to the in coming McMahon, who had the simple task of shooting past the goalie from 15 yards out. Kirby had a golden opportunity to earn a draw in injury time, but the offending player shot over the bar from 5 yards out, when it looked easier to score, much to the annoyance of the away section of the dugout.
Ryhope Community Park looks like it receives a lot of tender loving care, the pitch and the perimeter of the ground is spotless, there’s plenty of scope for improvements if need be, but the club seem happy enough at this level, the Wearside League having been their stamping ground for over 50 years. 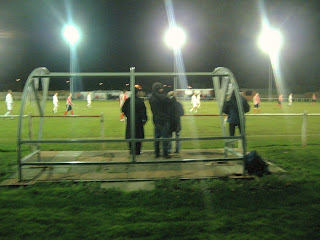 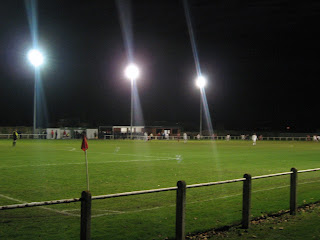 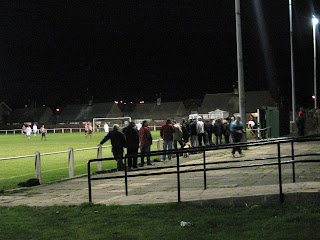 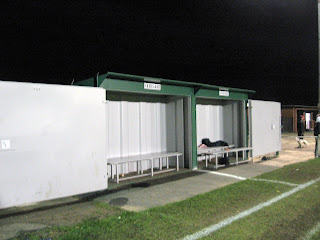