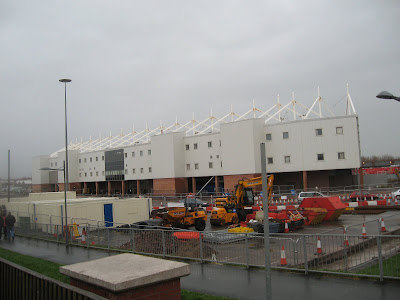 Blackpool is a world famous seaside resort in Lancashire, off the Irish Sea coast. The town became a major holiday destination during the first half of the 20th century, when factory workers and families from the north of England and Scotland took their annual holidays there. Even though the number of visitors has declined over the years, it is still the UK’s favourite coastal resort with over 10 million visitors a year, although nowadays it’s a more favoured destination for stag nights and hen parties.
Blackpool FC were formed in 1897, they previously play at Raikes Hall Gardens and then the Athletics Grounds on the racecourse at Stanley Park. In 1899 they moved to land owned by a local farmer at Gamble’s Field, which was then used by Lancashire League side South Shore, the two clubs agreed to merge, keeping the Blackpool FC name and renamed the ground Bloomfield Road.
The ground had a single 300 seated wooden stand, which was destroyed by fire and replaced with a new West Stand in 1917, a small wooden stand was also added at the north end; named the Motor Stand with additional terracing to the south and along the east paddock, which at the time made Bloomfield Road one of few grounds in the country with stands at all four sides.
The two tier South Stand was built in 1925, included changing rooms, offices and refreshment bars, bringing the total capacity to over 20,000, more improvements followed after the clubs promotion to the First Division in 1930, The Motor Stand moved into the north west corner to make standing room for 12,000, the north terrace Spion Kop took the capacity to over 30,000.
The ground reached it’s peak in the 1950’s, the East Stand was extended in 1954, raising the capacity to over 38,000, giving the club it’s biggest ever gate of 38,098 against Wolverhampton Wanderers the following year, floodlights were installed in ‘57, the Kop finally had shelter and additional seats were added to the West Stand.
The ground structurally remained unchanged over the next 50 years, but was gradually striped down and it’s capacity reduced, the roof on the Spion Kop was taking down, as the council viewed it as too dangerous and expensive to repair, resulting in the removal of the East Stand’s seats to compensate, maintaining covered standing in the ground. Safety measures saw the ground capacity dramatically fall, the old North-West Stand was pulled down, half the kop was closed and segregation in the East Stand meant the capacity was down to 9,000 by the 1990’s, the floodlights pylons didn’t escape either, 20 feet chopped off the top due to rust. 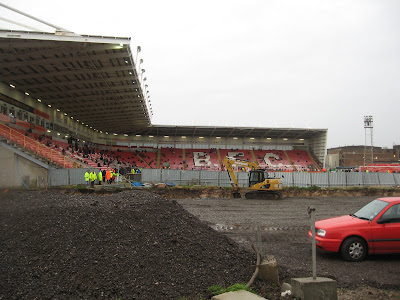 After surviving all those decades, the Spion Kop was knocked down in 1999 followed by the West Stand two years later, their replacements make up the first phase of the reconstruction of Bloomfield Road. I opted to sit in the far corner of the former Kop, or as it’s now known the ‘Stan Mortenson North Stand’ where a statue of the legend can be found outside, opposite the club shop and ticket office. The drummer at the back of the stand generates a great atmosphere, I must say that the Blackpool support was superb, with the drummer boy not allowing the backing to stop, resulting in constant singing, although by the end of the game the “di di di di di doe” song was beginning to get on my nerves a bit. The stand has a single tier with tangerine flip seats with BFC picked out in white.
The North West Stand links up the Sir Stanley Matthews West Stand, this also has a main single tier with the word ‘Seasiders‘ stretched across in white seats, there’s also an added small shelf with three rows of seating in front of the executive boxes
The East Stand is the away end, an open temporary stand with a capacity of just under 2,000, so those poor Palace fans got a right drenching, the stand is set a fair way back from the pitch with the turnstiles found off Bloomfield Road, there’s also a sad looking temporary pylon at the south side with the only original surviving floodlight in the north-east corner.
The South Stand survived until 2003, which is due to be replaced with a new stand with a capacity of 3,500. There’s been constant promises over the last few years of ‘work due to start soon’ however when I called at the ground earlier in the day the bulldozers and JCB’s were busy grafting, so it looks like work is commencing. There’s a clear view into the ground from the works entrance gate, where a few tried their best to watch the game, while a half a dozen blokes stood on a step next to the Travelodge across the road, where they got a slightly better free view.
The match got off to a slow start, conditions didn’t help, with both teams taking turns to venture up field before running out of ideas in the final third. The first shot on target in the opening half produced a goal, Palace back wearing their ‘Team of the Eighties’ strip took the lead through Ifill, shooting home from inside the box after playing a neat one-two.
The second period was more entertaining, Pool equalised after three minutes, with a tremendous volley by Ben Burgess from the edge of the box, which was greeted with a blast of The Dave Clark 5 hit ‘Glad All Over’ however the joy was short lived as Palace regained the advantage minutes later, Craig Beattie producing a fine finish from a Palace counter attack. Blackpool went all out for an equaliser, which arrived on 65 minutes, a free kick was floated into the box and nodded home by Ian Evatt, his first goal for the club. The Tangerines looked likely to grab a winner with Palace happy to soak up the pressure and capitalise on the break, they continued to play some neat football, which was typified by the best chance to win the game ten minutes from time, a neat exchange of passes saw Adam Hammill clean through on goal with only the keeper to beat, but his shot went agonisingly past the post, meaning a share of the points when maybe the team in tangerine just shaded it. 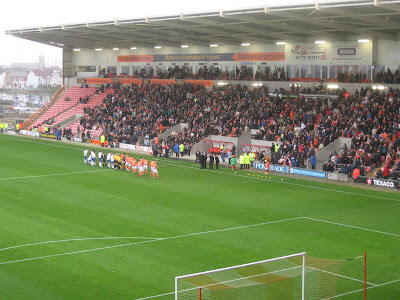 We're going down Blackpool, alright?
We're going down Blackpool, for a pint
We're going down Blackpool, alright!
To see the lights!
©1983 The Macc Lads ‘Blackpool’ from the album ‘Beer & Sex & Chips n Gravy’
It’s been over 14 years since I had just cause to sing that song, my last visit to the ‘Golden Mile’ was a typical boozy weekend away with the works football team, that I was playing for back then. That trip was memorable for my appearance at the breakfast table on the Sunday morning, when I experienced my worst case of ‘DT’s’ ever, and the weekend was also more memorable for the unforgettable ‘ashtray incident’ the night before. (but that’s another story!)
It’s not that I dislike Blackpool, it’s just I’m not a big fan, but I thought it would be a nice weekend away with the family, the kids love the amusements (James is determined to finish ’House Of The Dead 4‘) we pre-booked our tickets for the Pleasure Beach for Sunday, the breadknife had the shops and the boozers, while I was happy to go the match and also visit some of the local hostelries. The weekend also gave me the perfect getaway from “The game I hate the most” and at long last I could finally ‘tick’ off Bloomfield Road.
I had the opportunity to visit Blackpool’s home in 1987, Newcastle drew them in the 2nd Round of the League Cup (Littlewoods Cup then methinks..Ed) which in those days were two-legged affairs. I was a couple of weeks into a new job at the time and I couldn’t really take liberties and wag a day off, so I had to miss out. That turned out to be a big regret, as I would have loved to have seen the ground in full bloom, before it gradually diminished.
The constant heavy rain didn’t put too much of a dampener on our weekend, every time I’ve headed west over the last few months we’ve encountered relentless rainfall, so it’s something we’ve grown accustomed to. We had a good weekend break, the kids enjoyed themselves(unfortunately James didn’t finish ‘House of the Dead 4‘) I saw a canny game and me and the breadknife enjoyed a good drink and night out on Saturday.
Bloomfield Road is a great ground to visit, handily placed in the town centre, with plenty of choice for pre and post match eating and drinking, not short of a hotel or B&B, an ideal destination and not one of those out of town, stuck in the middle of an industrial estate types, that have emerged over the last few years. I’ll maybe do a revisit to Bloomfield, I’ll look forward to returning to the ‘Golden Mile’ and checking out the new 16,000 stadium, that’s when it’s finally complete of course, so with the current work rate that’ll probably be another 14 years

think yourself lucky you didn't visit Bloomfield in 87..it was already way way beyond full bloom

I was at this game, in the soaking wet uncovered away stand!