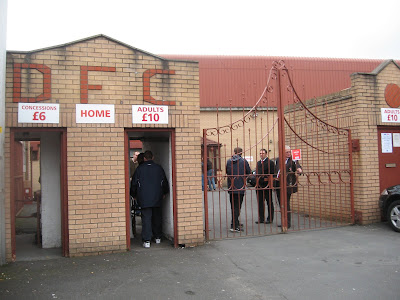 Droylsden is a former cotton mill town, east of Manchester in the Metropolitan Borough of Tameside.
The club was formed in 1892, when Joseph Cropper, landlord of the Butchers Arms, wanted a football team to play on a field that had been originally used as a fairground behind his pub. Their formative years were spent playing in local leagues and friendlies, with the club folding, reforming and renamed several times.
After the First World War, as the only surviving club in the town they joined the Manchester League, in 1923 after raising the necessary finance, the first work on the ground saw the pitch railed off, with additional duck boards and banking and a small stand added.
‘The Bloods’ were champions twice in the early thirties, thanks mainly to the goalscoring exploits of Ernest ‘Gilly’ Gillibrand, who notched 275 goals in four seasons. It was during this era that the ground was fully operative, by 1933 there was stands on three sides, and sunken baths installed in the dressing rooms, the capacity was up to 8,000 which included 2,500 covered.
The club joined the Lancashire League in 1936, new offices, turnstiles, lengthening the pitch and cover for 1,000 was added as part of their application, then after the war joined the Cheshire League until 1950. A year later they were forced to leave the Butchers Arms after rival club BelleVue FC(renamed Droylsden United) took up the lease, meaning relocating to nearby Moorside Trotting Stadium. Thankfully the local council bought the ground, it wasn’t viable to have two clubs within the town, so a merge was negotiated and the ground was renovated in 1952, including the rotation of the pitch and the ground totally rebuilt with only the changing rooms remaining.
The reformed Droylsden FC played in the Lancashire Combination until returning to the Cheshire League in 1968, however by the 1980’s the club made rapid progress, they became founder members of the North West Counties League in 1982, becoming Division Two champions in 1986-87 and stepped into the newly formed Northern Premier League Division One the following season.
In 1989-90 they won promotion, although a 7 points deduction deprived them of the title, after six seasons they were relegated, but returned in 1998-99 as champions, this time a strange twist of fate saw them benefiting from a points deduction of three points to Hucknall Town.
After finished runners-up in 2003-04 they joined the newly formed Conference North, losing out on promotion in their opening two seasons via the play-offs, however it was third time lucky in 2006-07 winning the title by five points ahead of Kettering, unfortunately they struggled to make the step into the top league of the pyramid, relegated after finishing bottom last season. 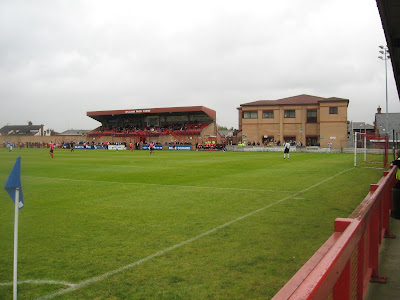 The Butchers Arms has been virtually rebuild again due to recent investment. The new William Pace Stand sits on the half way line, it has a capacity of 500 red seats, with access gained via stairs at the front of the stand behind the dugouts, with the changing rooms underneath, the clubhouse is in a separate building next to the stand beside the turnstiles and the toilets. To the left of the stand is a new looking covered terrace, with a bank of around a dozen steps and red crash barriers. At the far side there’s a covered rickety looking stand, sitting either side of the half way line, with the rest of the ground including the far goal, open hard standing bringing the overall capacity to 3,000.

Droylsden’s best performance in the FA Cup was in 78-79 reaching the 2nd Round Proper going out to Altrincham after beating Rochdale 1-0 at Spotland in the first round. Now they’re just one qualifying round away from again reaching the First Round after an injury time goal from Carl Lamb settled a thrilling cup tie at the Butchers Arms. The home side took a 20th minute lead, a cross from the right was met by Townson, who found plenty of room to direct his diving header into the corner of the net. Gateshead equalised midway through the half, when a free-kick from the edge of the D, was fired in from Alex Francis with the help of a slight deflection. Just prior to the break Droylsden regained the lead, poor defending from a corner kick resulted in the ball eventually falling to Byron who was fortunate to see his shot cannon in off a defender, giving Musselwhite no chance.
The Tynesiders started the second half well in search of an equaliser, this arrived after eight minutes when a great through ball from Southern set Harwood through on goal, he stayed onside before outpaced the two defenders, then kept his head to coolly place his shot to the goalkeepers right. The tie was finely poised with both teams going all out for a winner, however it was Droylsden who finished much stronger in the final ten minutes, just as it looked like Gateshead had held on for a replay, a deep cross from the right saw Lamb rise above the defence, his header hitting the underside of the bar and bouncing into the net, sending the home supporters into paroxysms of delight and the away following deep into despair, hope of a money spinning tie against a league club gone for another season.
Although I was disappointed to see Gateshead lose, on reflection I had witnessed an excellent FA Cup tie, both teams playing football in the correct manner, in great spirit and I cannot recall one dirty tackle throughout the whole game, testimony to both clubs for an entertaining ninety minutes (well 93 actually, if it was 90 then it would have been a draw) both teams a credit and a great advert for Non-League football. 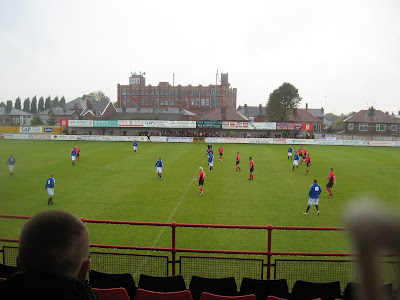 The trip to Droylsden wasn’t too bad, our coach left around 10.15am and after a half hour stop-off arrived in Droylsden for 1.30pm. The ground is located right smack in the town centre, with plenty of choice for a pre-match drink. Our first pub of call was ‘The Kings Head’ which is a Joseph Holts pub, where I tried a couple of pints of their bitter which has an acquired taste, there I had a chat with a couple of the local bar flies hanging around the bar, one of them a Geordie exile from Walker (like the saying goes “Everywhere you go…”)
I couldn’t go to the Butchers Arms ground without visiting the pub it’s named after, so I called in for a quicky, enjoying a top quality pint of John Smiths, before heading into the ground. The clubhouse is called the Phoenix Social Club, where I walked straight in with no sign of Max and Paddy patrolling the door and no sign of Brian Potter either. The club is very spacious, with a big TV screen and plenty of seats, even though there was none to be had as the club gets very busy on matchday.
I returned to the Phoenix at half time and before setting off home at 5.30pm, arriving back on Tyneside by 8.30pm. Obviously, apart from the result, I had an enjoyable day, I can recommend a trip to Droylsden as it’s a smashing little ground with a quality clubhouse, with plenty of places to eat and drink nearby and only a short distance from Manchester city centre.