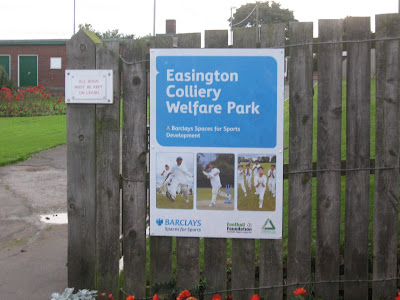 Easington Colliery is a former mining town in County Durham, a short distance east of Easington village. The colliery began in 1899, resulting in thousands of workers and their families arrived from all over Britain, terraced colliery houses were build, as well as pubs and shops and a whole new community was born. The pit suffered a major disaster in May 1951, when sparks from a mechanical coal cutter ignited a pocket of gas, causing an explosion which took the lives of 83 men, as a tribute the villagers planted 83 trees, one for each life, in Memorial Lane as a mark of remembrance.
The colliery closed in 1993 with the loss of 1,400 jobs, since then the town has fell on hard times, Easington Colliery is currently one of the most economically deprived locations in the country, the towns plight was recently brought to nationwide awareness in the Channel 4 series
The Secret Millionaire.
The town is famous for being the backdrop of the 2000 film Billy Elliott and also the scene for the second greatest album cover of all time (according to VH1) The Who having just pissed against a large concrete piling bulging out from a slag heap, for their 1971 album ‘Who‘s Next‘ although photographer Ethan A. Russell confessed that rainwater was used as a wee-wee substitute, as most of the band were unable to do the deed.

There are three separate football periods in the towns history, the first was back in 1913, formed as Easington Colliery Welfare, the clubs most successful phase was in the 1930’s, winning the Wearside League five times prior to disbanding in 1937. They returned two years later, the highlight during this second era was reaching the 1st Round proper of the FA Cup in 1955, going down 2-0 to Tranmere Rovers in front of a 4500 at the Welfare Ground. The club disbanded in 1964, but again resurfaced in 1973, enjoying more success in the Wearside League cups. In 1980 they merged with the towns other club, Easington Rangers of the Houghton & District League, becoming Easington Colliery AFC.
The new era raised ambitions to progress to the Northern League, after work on the main stand was complete, the club achieved their goal and began the 1985-86 season in Northern League Division Two, finishing runners-up the Newcastle Blue Star, scoring 101 goals and gaining promotion in their debut season. The remainder of their Northern League years saw a yo-yo effect, two further promotions and three relegations, until Easington finish 19th two seasons in succession between 2003-05, the club dropped into the Northern Alliance, before switching over to the Wearside league last season. 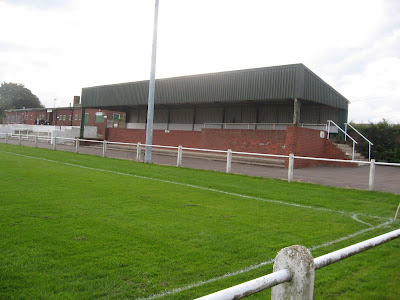 Entrance to Welfare Park, is via a short walk through the nearby park to the top of the hill, through the aforementioned Memorial Lane, at the foot of the park is a car park, with parking space on the road next to the Welfare. The football ground neighbours a cricket pitch, bowling green, with other football pitches in close proximity. The entrance gate is in the corner, next to the Main Stand, this is split into two sections, with access gained at each side, there’s three rows of blue benches and a green roof which extends out covering the hard standing.
There’s one building block, which caters for all the facilities, clubhouse, changing rooms and the food/drinks bar, there’s a separate toilet at the far end, which is now out of use, so bog facilities are found inside the clubhouse. In front of the building there’s two sections of terracing behind each dugout, sectioned off with white walls and crash barriers, there’s also a section of partial terracing in the far corner, these big concrete steps are better for sitting on, providing a great spectator spot and a top vantage point, giving panoramic views of the North Sea coast, stretching as far down as Billingham and towards Teesside and across to Peterlee, where their Eden Lane ground is clearly visible in the distance.
This FA Vase 1st Qualifying Round tie was postponed (along with every other game in the North-East) on Saturday, so I was surprised to find the pitch in great nick, considering the amount of rainfall over the last week. The furthest Easington have gone in the competition was in 1982-83, reaching the 4th Round, before losing to Seaton Deleval Amateurs, this year they were up against North West Counties League side Sisden, hoping to cause a upset against a club two levels higher.
The shock looked on the cards as Easington took a 12th minute lead, a cross from the right picked out Tom Orchard, who turned sharply in the box before hitting his right foot shot into the far corner. The lead was short lived, the visitors immediately applied the pressure and on 18 minutes a perfect cross was met by Lee Reilly with a fine header high into the net.
Silsden took control in the second half, scoring after 6 minutes when a corner kick was headed home by Hollindrake, then quarter of an hour later the tie was over, a bullet of a shot from Martin Packer from the edge of the box, gave the keeper no chance, Easington gave a hearty display, trying to get back into the game, but Silsden were well worth their place in the 2nd Round, booking another trip to the North-East at West Allotment Celtic.
I think Welfare Park is a cracking little ground, well worth a visit and is a laudable venue to host football at a higher level, the team have made a good start in the Wearside League this season, winning their opening four games, so a Northern League return may not be too far away for Easington Colliery 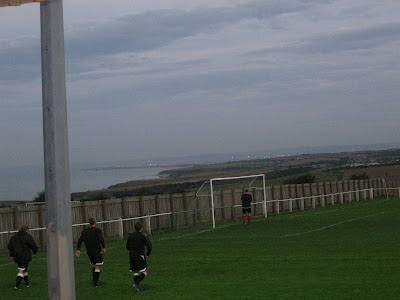