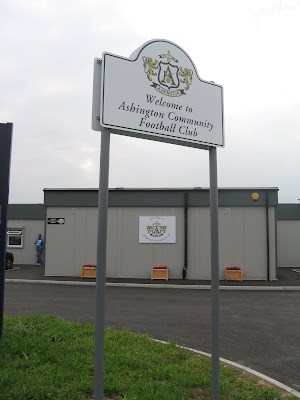 After attending the last match at Portland Park, I was pleased to be present at the very first game to Ashington’s new home at Woodhorn Lane. It’s been six months since that memorable Friday night in February and in that time a lot of work has gone on behind the scenes to make the move a successful one.
Woodhorn Lane is a complete contrast from Portland Park, for starters the ground's penned in with a spanking new picket fence, compare that to the woodwork enclosure at the old ground, which had more obvious gaps than Shane McGowen’s teeth. Seating comes way of a basic standard stand, decked out in black and white flip seats, which sits either side of the half way line, at Portland, Ashington Barmy Army had the acclaimed paddock terrace to congregate in and get behind their team (and bang that bliddy drum) but there’s a disappointing small standing shelter here, which is set back in-between the dugouts on the far side, the Ashington vocal support now assemble behind the goal that the Colliers are attacking.
All the amenities are found in one block on the nearside, there’s two separate bars, the function suite which has a large TV screen, with plenty of seating room and the aroma of newness about it, there's a smaller bar next door which leads into a hospitality area, you'll also find the refreshment bar, toilets and changing rooms, as well as a few picnic tables outside at the rear of the hard standing area.
There’s only one Ashington fan who is a member of the 100FGC, Trevor Johnson(squad#89) is a Colliers exile living in Dundee, he travelled south for this special occasion, I met up with him prior to kick off, I also spoke to Harry Watson(squad#54) as well, but there didn’t seem to be that many ground hoppers in attendance or Ossett Albion fans either.
The magic of the FA Cup was a fitting first game for the new ground, the Colliers opponents were Yorkshire Unibond Division One North club Ossett Albion, the game obviously attracted a bit of media interest, ITV.com broadcasted the game live and Radio Newcastle were also providing live commentary, unfortunately they were unable to get a signal so they hastily nicked off in search of another game.
The game had a scrappy opening period, Ashington looked the team more likely to score as they tried to expose Albion’s offside trap, they were rewarded for their endeavour on 35 minutes with good wing play from McAndrew, supplying a fine ball into the path of Bainbridge, to give the hosts the lead at half time.
Ossett started the 2nd half strongly, carving out four good chances in the opening ten minutes, including hitting the woodwork twice, they were made to rue their wasted opportunities as Ashington doubled their lead in the 63rd minute, substitute Scott provided a great cross from the right which was met with a thunderous header from fellow sub Hogg, who had only been on the pitch for two minutes.
Albion got a consolation 20 minutes from time, after a clumsy challenge in the box the ref had no hesitation in rewarded a penalty, Kelsey sent the keeper the wrong way but the Colliers held on to record a winning start in their new home.
Woodhorn Lane is more than just a football ground, it’s a vital part of the community, the club have assembled a new executive board and management structure, under the umbrella Ashington Community Football Club, along with Wansbeck Council and support from their sponsors, the club are ambitious and heading in the right direction, the new ground just the beginning of a brand new era. 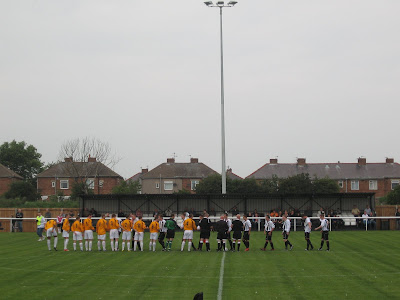