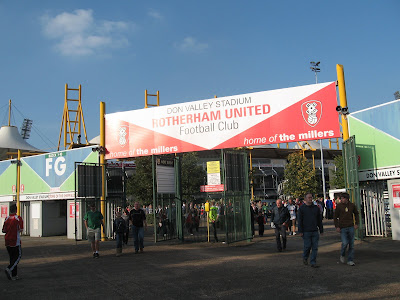 Rotherham United’s residence at Millmoor, their home for the last 101 years, came to an abrupt end on the eve of the current season, the club failed to come to a feasible rental agreement with the grounds landlords, taking the decision to relocate 4 miles to the Don Valley Stadium in Sheffield.
The current situation, makes it likely that Millmoor is yet another stadium condemned to the ‘lost ground’ list, which is a shame because yet another proper football ground has gone. I visited Millmoor twice previously with NUFC in 1982, the first was near the end of the 81/82 season, The Millers had gone on a fantastic run, winning their previous 9 games, giving them an outside chance of promotion. Their side was skippered by Emlyn Hughes, and included that old dirty hacker Gerry Gow, as well as Ronnie Moore up front, but it wasn’t a perfect 10 for Rotherham, Kevin Carr saving a last minute penalty from Tony “Tiger” Towner in which was an entertaining goalless draw.
I returned again the following season, with United fielding a couple of key signings including Kevin Keegan (whatever became of him) and Terry Mac, the game was featured on BBC’s Match of the Day, with viewers treated to a 5-1 away win, which included 4 goals from Special K, I loved standing on the old Railway End terrace, which could generate a great atmosphere and a lot of noise, especially like on that occasion in October ‘82. 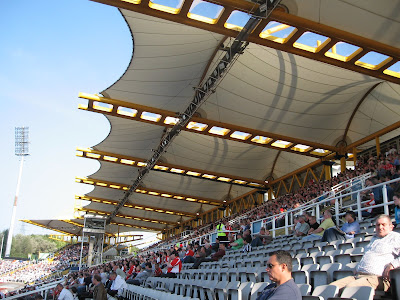 The club have agreed to play their home games at the stadium for at least the next 4 years, built in 1990, the 25,000 capacity Don Valley Stadium became the first national outdoor sporting venue built since the old Wembley Stadium in the 1920‘s. It was designed by Sheffield City Council and built by RM Douglas Construction at a cost of £29M in readiness for the 1991 World Student Games. The Millers move is a bit like being shoved out of your council flat and moving into the neighbouring private estate, the ground is of course an athletics stadium, the hint being the surrounding eight lane running track and the odd hurdle lying around, but take these non-football aspects away and your left with a very attractive looking stadium. The ground is open on three sides, a single tier of silver and light grey toned seats, with an extra section of seats added in the near corners, leading up to the press boxes, parallel to the start and finish lines of the 100m track. All the spectators on matchday are housed in the 10,000 capacity Main Stand, it’s focal feature being the rather unusual canopy roof, made from Teflon coated glass fibre, it gives the impression of a set of giant sheets thrown over some iron girders, giving the stadium a unique look. There’s an Eastern European feel to it(not that I’ve been to Eastern Europe but you get the jest) not just because of the running track but mainly due to the five 45metre tall pylons which are the strongest illuminating floodlight system in the country, there’s also standing room for spectators behind the other three stands, which can be used for open air music concerts.
The game with Luton Town provided a clash of two of the clubs in the mini-minus-league at the foot of the table, both clubs along with Bournemouth started the season playing catch up, due to administration and financial irregularities . On a glorious late summer afternoon, when the weather gave the vibe of a pre-season game more than a relegation six pointer, it was so hot that when a player received treatment the rest of the players stopped for a water break, this contributed to a lacklustre display from both sides and a scrappy first half. Rotherham created a few half chances, but the best chance came Luton’s way, Spillane heading wide with their only worthwhile effort on goal in the half.
The second period improved as the game opened up, The Millers were the team most likely to and scored the decisive goal on the hour , a left foot cross 30 yards out from Alex Rhodes caught out the goalkeeper, sailing over his head and into the net, after the goal the keeper stayed down, appearing to be injured, but I think he was just hiding his embarrassment in conceding such a soft goal. The victory took United’s total to -3, so are now looking onwards and upwards and progressing up the table, but Town’s position is looking more precarious, still needing seven wins just to get rid of their minus points tally.
The Football League have instructed Rotherham United that they have four years to return to the town, the club are working with Rotherham Borough Council with plans for a Community Stadium and a return to the town as soon as possible, hopefully that new venue will be a proper ground, with a bit of character like the old place, or maybe their differences with their former landlords could be resolved and stop Millmoor becoming forever lost. 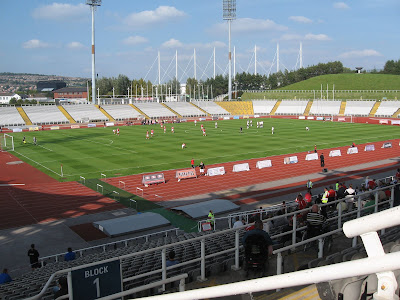 I had a thoroughly enjoyable day out in South Yorkshire, I left Newcastle at 9am, having no problems with my three train connections between Leeds-Doncaster -Sheffield and arrived in the steel city at 12.10pm. I met up with some of the 100FGC squad at the Bankers Draft pub at the foot of Market Place, this Weatherspoon’s pub had some fine real ale options (I know a few of you are fascinated with real booze) so I worked my way along the pumps, sampling a pint of each selection. I met up with ‘The Groundhog’ squad #34 David Poole who was accompanied by a couple of senior Sheffield residents, Cyril and Don. Jonathan Elton-squad #68 also made the trip, travelling north from Kent and we enjoy a few pints and some good football ground crack before stepping outside the pub, where the tram stop was virtually on the doorstep.
The fare was a reasonable £1.70 and stopped just a short walk from the stadium, we were all quite impressed with the stadium and it’s facilities, the match wasn’t a classic, as it looked to be heading towards a goalless draw, so we were relieved that our trip was finally rewarded with a goal.
After the game squad#.93 Dan Gooch found us heading back towards the tram stop, he made the trip from Nottingham but was unable to get in touch with me prior to his departure, so I was unaware he was meeting us. He made a grand gesture of requested an announcement over the PA at the stadium, welcoming the 100FGC to the Don Valley Stadium, which I regrettably missed prior to kick off. He joined us on our return to the Bankers Draft for a few more sherbets, before I headed off to catch the 1824 to Doncaster, the first of my return trains back home.
I was back in Newcastle for 10.15pm, with hordes of Toon fans returning from London on the same train after the defeat at West Ham, singing their hearts out in Central Station as if they’d won 5-0 and not witnessed another sorry display, that defeat for Newcastle didn’t bother me so much, as I had such a good time, visiting a marvellous stadium, with such terrific company and the lovely weather adding to such a great day.

footnote;
Thanks to my pal Jimmy Jimmy for sorting out the train tickets, shame he couldn't accompany meet to Sheffield, but they'll be more future train trips..hopefully. ;-)

But if Jimmy Jimmy had been with you it might have caused a repeat of that Doncaster incident where you missed the train back to Newcastle!

Funnily enough, that's exactly what he said when he told me he couldn't make the trip.