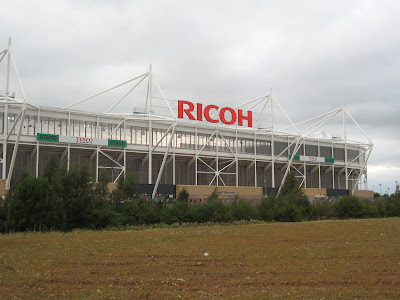 It finally happened, at long last, Newcastle got an away tie in one of the cups at a ground I hadn’t been to, every season I always hope we get drawn away in the early rounds at a previously unexplored venue, but it’s a rarity, almost as rare as a goal from Alan Smith, this is of course before the ‘big lads’ come into the competition and we then get knocked out by Arsenal/Chelsea (delete where appropriate)
The Ricoh Arena is located in the Rowley Green district of the city, on the site of the former Foleshill gasworks, as well as the stadium there’s a 6,000 square-metre exhibition hall used for staging gigs, hotel, casino, leisure club and a retail park. The Arena is jointly owned by the Higgs Charity and Coventry City council, it was constructed at a cost of £113M, the naming rights are owned by the camera and photocopier manufacturers Ricoh, after agreeing a 10 year sponsorship deal
The Sky Blues moved into their new home after 106 years at Highfield Road, my last visit to Covvy was exactly 23 years to the day, so I’ve had a very long ’covvy break’. On that night it was two late goals from Rambo Reilly and Irish winger Ian Stewart clinched a 2-1 victory for United, but the image of Highfield Road that always sticks in my memory though, apart from Ian Wallace’s big bubble of ginger hair, was the sky blue Reliant Robins that were parked behind the goal, many years before the ground became the first all seated stadium in the Football League. 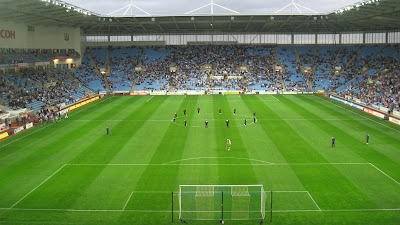 The match was live on Sky Sports; neutrals viewing were treated to 120 minutes of pulsating cup-tie football, when the game as a contest should have been over after 45.
Newcastle played some good passing football in the first half, creating several chances. I’ve been impressed with the two new Argentinean lads, they’ve settled in well, with James Milner looking very lively (please don’t go!) having a hand in both goals as United took a two goal lead. For the first, he stayed onside after exchanging passes with Jonas, getting to the by-line and squaring the ball to N’Zogbia, whose effort was knocked in off the defender, then on 38 minutes his cross shot caught out the keeper, going wide to Marshall’s left post .It looked game over at this point, but Clinton Morrison gave City hope in injury time, with a fine finish, curling his shot over Given from the edge of the box.
The second half continued in the same vain, Newcastle had chances to finish the game off, but as long as there was only one goal in it, then City remained a threat. Then in the 4th minute of injury time, after the referee had indicated only 2, a long throw in from Gunnarsson (his run was so far back, he starting off in the stand sitting on someone’s knee) was rifled into the box and met by Scott Dann, who headed low into the bottom corner of the net. What a sickener! “Two up and you balls it up!” sang the City fans, they were right of course, Newcastle always have to do things the hard way.
I was more concerned about what time I was going to get home (1.40am as it turned out) than the match itself, I was confident we would still go through, but was pissed off with the extra half an hour that was needed in doing so. My confidence was confirmed when in the 7th minute of extra time, the Toon’s new ‘supersub’ Michael Owen latched on to a great ball from Enrique, before side footing the ball past Marshall to eventually, at long last, book United’s spot in the 3rd Round. 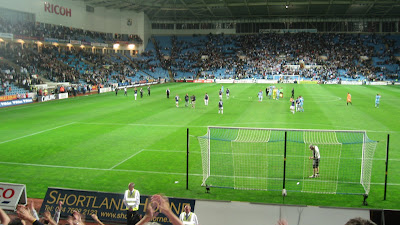 We departed at 1.30pm, again I travelled with the Patrick’s (Squad no.2 & 79) plus the addition of Tom H, back in the fold travelling to away games with us, after being a regular petrol sharer throughout the 1990’s. I picked out a £4 parking spot at the JK English Pub on Foleshill Road, Ian’s comedy sat-nav got us there without any problems, arriving at 5.15pm. After a couple of drinks we set off to the stadium, which was only a short 15 minute walk, basically around the corner and through the biggest Tesco Extra on the planet. The retail park which neighbours the stadium is very good, with plenty of places to eat or shop if you prefer, there is the option to shop at Tesco’s and leave your car in their car park, that’s as long as you spend £25 in the store, after a visit to the club shop, purchasing my usual pin-badge, we entered the ground.
Prior to kick-off I literally bumped into my cousin Sam, who I haven’t clapped eyes on for a good 14 years, it was great to see him as we’ve been out of touch since he moved ‘sarf ‘ to Croydon, it’s always nice to see someone who you haven’t seen in a long while, as they always seem to mention that I haven’t changed and don’t look my age.(not that I’m vain or owt, like!)
As well as it being the 23 years since my last visit to Covvy, today was also my 13th wedding anniversary, unfortunately my breadknife and were apart and we were unable to celebrate the happiest day of our lives together, however she was happy that I was able to celebrate a Toon victory instead, on the road to Wembley, or should that be the road to knocked-out against Arsenal/Chelsea.

This post was written in chocolate brown in honour of the first ever ugly strip in the history of British football.

Good read! I caught bits of this game Shaun and Coventry should have been dead and buried long before ET. Must be disappointed to have lost Milner.

Dissapointed Milner's gone,only time will tell if it was the right decision.