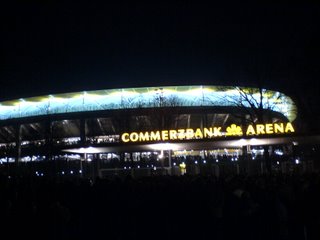 The artistic stadium formely known as Waldstadion,is a venue worthy of world class status,as it appeared to football fans worldwide during the summers World Cup in Germany.
The Waldstadion (Forest Stadium) was opened in 1925,and was originally used for football and athletics it later became a venue for the Nazis and renamed ‘Sportfeld’ with political rallies taken place there,towards the end of World War Two the US marched into Frankfurt and seized the site and renamed it ‘Victory Stadium’,the ground was then once again used for sporting events.
Having previously been rejuvenated for the 1974 World Cup,the current arena is now in it’s third reincarnation.Work began in 2002,in preparation for World Cup 2006 at a cost of 126M euros,and the newly named Commerzbank Arena was opened in the summer of 2005,playing host for the final of the Confederation Cup between Brazil and Argentina, and is now one of the biggest and best looking stadiums in Deutschland.
Amongst the greats to have appeared at this ground is “The Greatest” himself,Muhammed Ali who fought Karl Mildenberger for the World Heavyweight Championship in the sixties,but now it’s the turn of “The greatest football fans” the ‘Toon army’ to make there first appearance at this impressive looking arena.[sorry! tedious link alert:-) ]
On approach to the stadium you are greeting with ‘Commerzbank Arena’ in yellow neon letters,so there’s no mistaking where you are,and beneath this are the turnstiles,which are bar code readers,so this gives you a speedy access,once through this gate you find that the stadium blocks are all open,so there’s no individual turnstiles for each section of the ground.[nice one!] Each block has it’s own refreshment area,so this helps with queing, and everyone is well catered for.
The arena itself is a wonderfully looking large steep bowl,with no pillars or supporting walls and fantastic views from all areas of the ground.There’s a transparent retractable roof and I partically like the web effect grid that runs through it.The vocal point of the stadium is of course the four sided large screen that sits high above the centre of the pitch,looking at it,it’s hard to believe how England keeper Paul Robinson managed to hit this target,during the World Cup match with Paraguay.
The fans create a fantastic atmosphere with clapping and singing from all sides of the arena,for the team line ups in the match programme the supporters or ‘Fans Ruckhalt’ are giving the squad number 12,as there passionate support acts as the 12th man.The most vocal are in the lower tier behind the goal,where the fans sway and stamp their feet and it looked an awesome sight to us in the opposite end of the ground.
an example of this - http://www.youtube.com/watch?v=znD2L3f7Nzg&mode=related&search=
Two things I must add,that I did notice while watching the game is why are the fans banners that hang over the front of the top tier upside down,and why are the first aiders all dressed in Santa suits? If any Eintracht fans happen to read this,then leave a comment with the answer please.
My overall impression is that Eintracht Frankfurt have what any ambitious club could ask for,a truly fabulous stadium and a loyal and passionate army of supporters, the only thing that’s missing is success on the pitch in the form of silverware……now doesn’t that sound familiar? 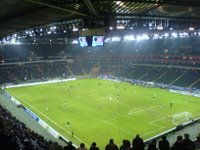 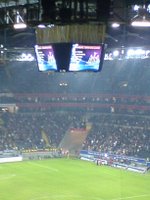 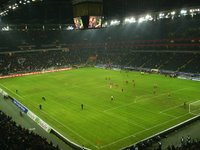 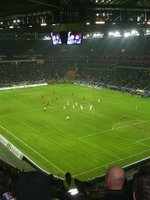 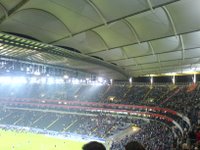 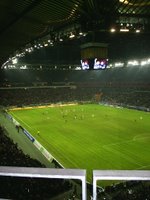 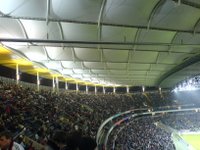 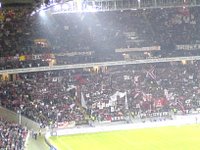 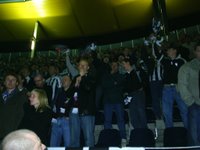 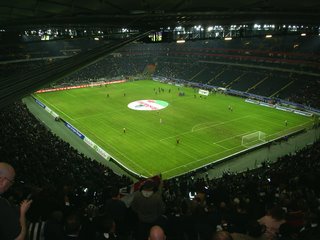 Was it worth it? Of course it was! Seeing Newcastle clinch top spot in our UEFA Cup group and most of all,another new ground and one of the best!
on December 01, 2006
Email ThisBlogThis!Share to TwitterShare to FacebookShare to Pinterest
Labels: Eintracht Frankfurt, Newcastle United

The banners hang upside down due to ongoing repression towards the fans, such as the denial of entrance in to all stadiums from 1st to 3rd league for people who just happened to be found at the wrong time in the wrong place. Many fans belonging to the so-called "active fanscene" (Ultras) are suffering from this, and as an action of solidarity the banners are upside down.

regarding your question about the upside down banners in Frankfurt. It's a protest against banning several supporters from the stadium without a reason. Police and stadium security acted arbitrarily, especially at away matches. The supporter scene wants to show solidarity with them. Some people think, that this banning practise will destroy grown support culture. Football is going to be an event, visited by customers. We don't want to let it happen. Reclaim the game !

Thanks for your contribution and clearing that up,Cheers!

greetings from frankfurt. i had a great time with the newcastle fans in frankfurt and i hope to see you again. maybe in two or three years in the champions league final ;)
good luck for the rest of the season.

Looking at your pictures, the place has clearly changed big time (for the better) since my visit in 1982. Glad you had a good trip. See you on 23/12 ? If so, I will let you know where we are having a shandy (5 minutes from St James' Park).

Very nice site. Best wishes from frankfurt to newcastle. i hope all newcastle fans have enjoyed the trip to frankfurt.

We will following u in the next round. We must only beat the turkish club, no problem :-)

Just for your information - real fans still call it the 'Waldstadion'