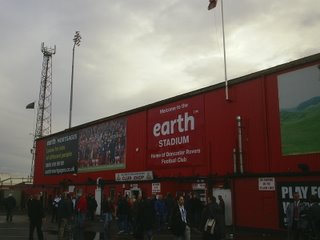 At last, a trip down to Donny and a last opportunity to visit Belle Vue,or should that be the Earth Stadium'(which i doubt any self acclaimed Rovers fan would call it unless you worked for Earth Mortgages) their home for the last 84 years before their move to pastures new in the new year.
Doncaster Rovers have played at 'The Belle' since 1922 and the old ground has survived fire,mining subsidance,conspiracy and arson and on the field been graced by the likes of amongst others the Keetley Brothers,Alick Jeffery,Sydney Bycroft,Harry Gregg(at the time the worlds most expensive player) and lest not forget "me old flower" Charlie Williams.
Anyone whose visited Belle Vue will know that the old stadium is on it's last legs but it has a certain character and an historic feel to it.It was great to stand on the terraces for a league game again with the ground being made up of two open ended terraces behind each goal,I stood on the 'Town End' terrace facing towards the Brighton fans or should i say a 'flock of seagulls' ( "well I took a photograph of you,for something to remind me") facing towards us in the 'Rossington End'.
The Main Stand has a seating capacity of just over 1500 and has a paddock standing area in front with which looks like an extended roof,adjacent is the popular side which is a covered terrace where most of the home fans vocal support comes from.
I travelled down on the train,in first clarss,thanks to my old mucker and companion for the day Jimmy,who has one of those train-season-ticket-thingys,so I had a free trip to the match(well so I thought)after a couple of pints in Central Station we boarded the 12.32 and arrived at Doncaster Station just before two o'clock.
We decided to jump a taxi to the ground to give us a bit more time in the beerbar,while travelling to the ground the taxi driver asked why we were here and Jimmy jokingly replied "We're sick of watching Newcastle so we've come to watch Doncaster instead" our taxi-driver was straight on to his radio to notify head office that unbelievably,he had two Geordies in his cab coming to watch Rovers instead of Newcastle,the lass in the taxi office then proceeded in telling all the other taxi drivers about us,so our arrival in the town of Doncaster was announced with disbelief even though Jimmy's remark was with his tongue firmly in his cheek,and of course they mustn't have known that the Toon were at home the following day and I would be at that game as well.
The taxi dropped us off at a pub next to the Dome complex,and after a few pints of Tetley Bitter(funny,it always tastes nicer when drinking it in Yorkshire)we walked along to the ground.This involved trying to walk through what can only be described as' puddle city' or maybe 'Mini-Venice' but not as picturesque.
The match wasn't a classic but was still enjoyable to watch,a tight encounter settled by a first half header scored by former Seagulls striker Mark McCammon.Overall Doncaster deserved the the victory,while having the best of the opening period Brighton pushed for an equaliser in the second half,but the home defence held firm and didn't look like letting the three points slip.
match report -
http://www.doncasterroversfc.premiumtv.co.uk/page/Match/Reports/0,,10329~34397,00.html
After the game we walked around to the taxi rank at the nearby ASDA store,there were no taxis there,so we went into the store and the young girl on the customer services desk was very helpfull in ordering us transport back to the train station.But the taxi didn't show up,because the traffic outside the Dome Complex was chocka-block and the taxi had no chance in reaching us,after trying to order another taxi from the nearby pub we gave up on any chance of us boarding the 17.35 to Edinburgh.
So there we were Smid and Jimmy stuck in Donny having missed our train,trekking back on foot in 'pissed off mode' back to the station and on arriving having to cough up £69 between us(so much for the free trip) we then toured the train stations of Yorkshire and finally treked back on to the East coast line back to the Toon.
My only previous recollection of Doncaster train Station was on TV,and the first ever episode of 'Whatever Happened To The Likely Lads' when Bob and Terry were reunited after five years, having bumping into each other on a Newcastle Bound Train.Terry had just came out of the army and after speaking to Bob on the way North decided that he didn't want to go home to Tyneside and decided that he was going to alight at Doncaster and return to London,to cut a long story short Bob got left behind in Doncaster having missed the last train,so this station has a bad history for Geordies,as another couple of likely lads would have been left there,if it wasn't for the fact Jimmy was carrying his little plastic friend.
Apart from the missed train incident,I had a very enjoyable trip to Doncaster and was pleased to finally get to view Belle Vue in there third last game at the old ground.I'll return again but next time it will be in better surroundings at the impressive looking Keepmoat Stadium,about a half a mile away from the current site and next time I'll make sure we'll get a later train home,so for now Doncaster "Ahl Sithee"
A Brighton fans view of the game @-http://thegroundhog.wordpress.com/2006/11/29/doncaster-rovers-part-2/ 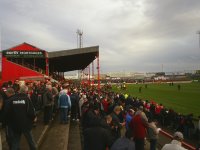 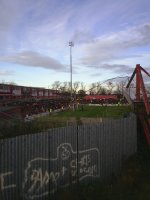 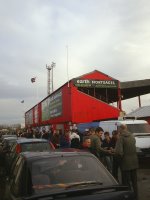 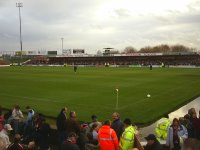 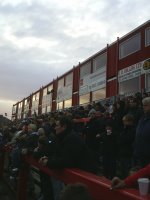 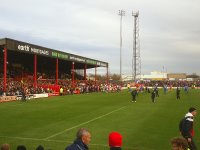 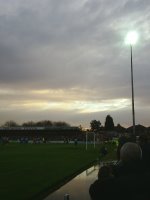 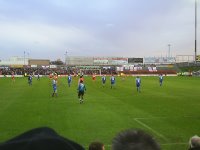 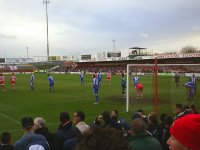 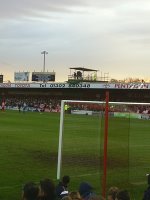 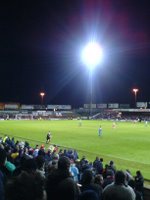 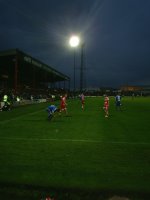 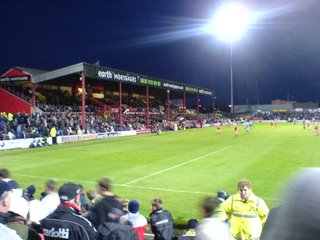 Shaun,
Sorry, I posted my reply to this on the new era article. Anyway, thanks for the link to my article - I'll reciprocate with one to yours from mine.
The subjective and objective accounts of the game!!

Here!! Those puddles in the car park at Belle Vue were an integral part of the 'match day experience' y'know :) Been there for about 200 years they have.

I remember Belle Vue when it was a proper grounbd. The 'Rossington End' was vast - not as big as the Holt End at Villa, but not far short of it. And the 'Town End' had the quaintest wooden stand you've ever seen anywhere. It was fab as a kid. But the Bradford fire put paid to that. and then the 'Pop Side': pathetic it was since about 1988 or so. But mining subsidence meant that the really very large indeed old Pop Side had to come down pronto - before it fell into a socking great hole in the ground. That was a big terrace that was. and with an enormously long bar at the back of it too. The thing they put up to replace the old terrace was just awful.

Still, it's all memories now. Some damn good ones, but the new memories will be of the Keepmoat Stadium and the upcoming trip to the Millenium Stadium! Yee haa!!