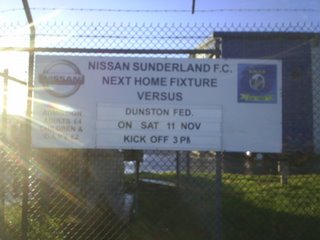 This was the second time in a week that I've seen Nissan in action,following the disapointment of seeing them knock Gateshead out of the Durham Challenge Cup, at the International Stadium on Monday night,I ventured into the outskirts of Makemland to check out one of the most progressive clubs in the ANL.

Nissan Motor Manufacturers UK formed their own football club in 1988 and played their first season in the newly formed Wearside League 2nd Division as Nissan FC.They made there first of two name changes in 1994 adding Washington to their title and won promotion into the Northern League 2nd Division in 2000/01, they then progressed with 6th,5th and then a 2nd place finish and promotion into the 1st Division.

At the beginning of last season came yet another name change,this time adding sunderland to the team name,This was the first time that the town of sunderland's name been used in the last 99 years of the Northern League,so they became Sunderland Nissan or is it Nissan Sunderland? On the cover of the matchday programme it announces "A Warm Welcome to Nissan Sunderland Football Club",but thumbing through the pages they are mentioned as Sunderland Nissan(7 times)Nissan Sunderland(5 times) and Nissan FC(5 times)so what is it? I think I'll just nickname them "Makem Japs" or should that be "Jap Makems"!!! The club nickname is naturally 'The Motormen' so that will have to do.

When I visit a new grounds for these games,I usually spectate it as a neutral and hope to see an entertaining game and of course get some good matchday pics,but this afternoon is different.If you tied me down and tortured me by sticking matches under my fingernails and blasting out a James Blunt CD in my ears I would then confess that my Northern League allegence lies with Dunston Federaton Breweries FC.This is because the club is based in Gateshead and therefore is my local ANL club,as the crow flies about 2-3 miles away from my fortress in Sheriff Hill.

The Nissan Sports Complex has one main stand,with two sides of the ground exposed to the elements with the Sports Complex and changing rooms behind the goal.The best thing about the ground is the Penshaw Lounge,which stays open during matchdays which means on a cold Autumn day like today there's the luxury of staying in the upstairs bar and watching the game from the window,with beer on tap and Sky Sports Soccer Saturday on in the background,i'd describe it as a communal executive box,not bad for £4. So after standing around in the cold for the 1st half I made the wise move of watching the 2nd half with the 'Fed Lads' in the luxury and warmth(my view of the game is the bottom pic on left)

The game was a typical ANL game which involves 'taking no prisoners tackles' and constant abuse towards the referee coming from both tug-outs and both sets of fans.The match seemed to have swung towards the Motormens favour after the dismissal of Leon Scott for a profesional foul around the hour mark,Nissan took advantage of the extra man with a goal from Stephen Halliday and looked to have secured the 3 points.But a late rally from 10 man Fed produced a goal from Graeme Armstrong capitalising on a football howler from the Nissan keeper(which wouldn't look out of place on one of those football funny DVDs which usually come out at Xmas)and an injury time winner from Stephen Preen,or was that Dennis Bergkamp? It looked like him from the bar window and that's without a good drink!

(click on thumbnails for larger images,sorry about the quality of some of the pictures,but my camera was in a funny mood) 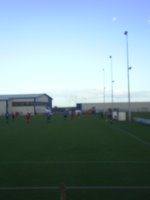 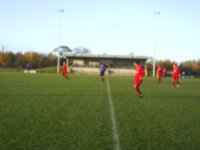 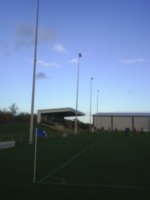 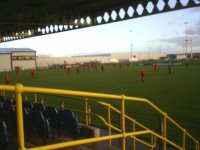 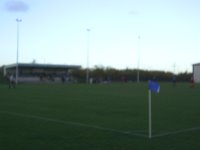 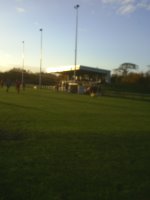 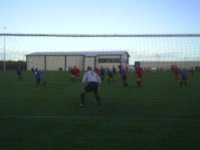 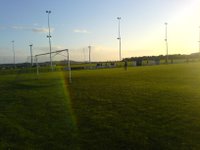 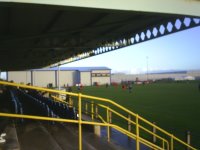 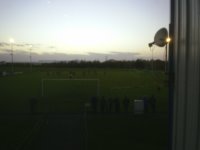 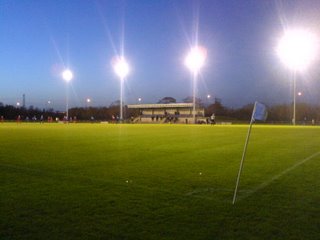 May 2007- In a season where Nissan looked the team most likely to, having been league leaders for a large majority of the season, they were piped to the title by Whitley Bay.
The season went to the wire with the Motormen needing to win their last game of the season at home to Billingham Synthonia to guarantee the title. Billy Town had finished their season the previous evening and were hoping that their two rivals would slip up, Nissan did, beaten 2-1 by the Synners while Bay took the title on goal difference with a 3-1 win at Durham City, so in the end Nissan finished a dissapointing 3rd.
Final ANL Division One table

Great review (as ever, it's always good to read), but if I could perhaps offer some constructive criticism, then it's that the blue text is somewhat difficult to read on the black background.

Otherwise, keep up the good work!

You're right Tim.I tend to write my reviews in the club colours of the team I'm visited,changed it to a lighter shade of blue,thanks for your kind words! Cheers!