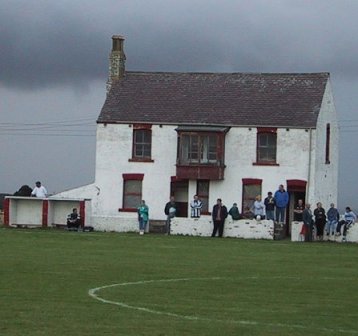 November's 'Ground Image Of The Month' features a picture from the 'High Road Ground' home of former Northern League Club Stanley United.
United were founded in 1890 and played in the Northern League between 1910 and 1974,where they were League Champions on three occasions including two titles in the early sixties.
The club later became founder members of the Wearside 2nd Division until the league was disbanded and became a single division in 1996, they played out there time there until the club was disbanded in 2003.
The ground was then taken by Crook Wanderers of the Crook & District League,who changed their name in honour of their former tennants,so the name of Stanley United lives on.

You can find some similar pictures in the Former Club Photos section at the Northern League website athttp://www.northernleague.org/photos/view_photo_former_club_ground.php

October Ground Image -the sequel
Last month's ground image in the Faroe Islands was a popular one,so I scanned through the worldwideweb and found another picture from another angle,via Football Grounds In Focus. 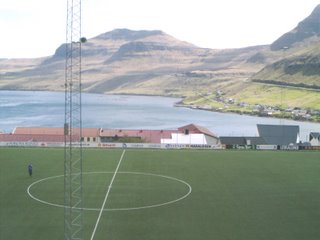 on November 03, 2006
Email ThisBlogThis!Share to TwitterShare to FacebookShare to Pinterest
Labels: Stanley United

I went up there in 1963-4, when I was about 15. My Dad took me to a FA Cup game against Crook Town, who won 2-0. I remember being surprised at how many people were in the crowd, although I can't remember the official attendance. I went back a couple of seasons ago for an Under-16 County Cup tie between Byers Green and Felling Magpies. It was and still is a cold hole! I believe that vandals set fire to the old building recently, which is a sad sign of the times.