My Back Pictures - 105 Millennium Stadium 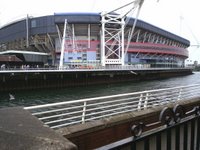 Cardiff's Millennium Stadium certainly has the 'wow factor' about it,I had ample opportunity to have a good look at the stadium,because the inept and heartless performances from three or four(or should that be five or six)of the team in black and white that afternoon,had me paying more attention to the magnificent stadium than the events on the pitch.
I was pleased that the F.A. decided to stage the 2005 Cup semi-finals as well as the final in Cardiff,I didn't hold out much hope of the Toon getting to the final,this is of course the Souness Era(or should that be Souness error)and with the New Wembley being ready the following season* this was maybe my only opportunity to see the lads at the national stadium of Wales.
(* Well thats what we thought!!)
The Millennium Stadium sits on the banks of the River Taff in Cardiff city centre,it was built on the site of the old Cardiff Arms Park.Construction of the stadium took just over 2 years and opened in 1999 at a cost of only £126m.If you compare this with the New Wembley which has an estimated cost of £750m and 7 years later the work continues.
It's the first Stadium in the UK to have a retractable roof,so those over paid footballers won't get there hair wet if it pisses down,and has a capacity of 74,500.
Another great feature of the stadium are the ''joy machines'' in the stadium bars,these machines can pour 12 pints in less than 20 seconds,which is handy if it's your round.But with this positive,there's a negative as the bogs are far to small with constant queues,so you have to be prepared to spend most of match dying for the toilet!
The most common compliant about Cardiff being the venue for the big finals is the location,it took us 9 hours to get home,the first 3 hours of that journey was just trying to get out of Wales!It will probably be my only visit to the Millennium Stadium,so I feel really sorry for those Chelsea,Arsenal and Man Yoo supporters who are regular visitors,and having to suffer the long 3 hour trip from London to Cardiff when they could just pop around the corner to Wembley.
On the whole I found Cardiff a most welcoming city,with the Newcastle supporters recently being named as the city's favourite football visitors, by a survey of local buisnesses and residence,well those 'Taffys' certainly have a stadium to be proud of,so "Diolch Caerdydd" 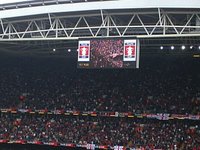 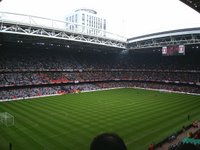 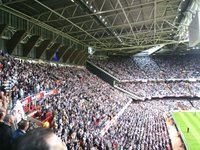 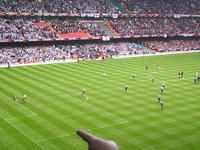 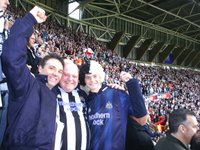 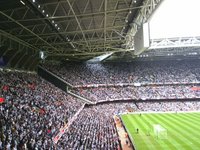