My Back Pictures - Wembley

Wembley Stadium the home of English football for over 80 years,every football fans dream is to make it to those famous twin towers come May for the F.A.Cup Final,the showpiece game of English football,but the dream had a habit of turning into a nightmare for us Newcastle United fans.
My personal record in attending games at Wembley reads;
Att 5 W 0 D 0 L 5 F 2 A 12
(2 F.A.Cup finals,1 League Cup Final,1 Charity Shield,1 F.A.Cup Semi Final)
My other appearance at Wembley was for the American Bowl,Chicago Bears v Dallas Cowboys,where I pledged my support for the Cowboys,guess what?.. Even they lost as well.
So the thrill of seeing those Twin Towers in the distance as you approach the stadium,soaking up the atmosphere as you walk up Wembley Way, the sheer awe as you see the pitch for the first time and the deafening noise as the players emerge from the tunnel as far as i'm concerned you can stick it!! (and that's putting it politely)
So I'm pleased the old stadium has gone,good riddance to bad rubbish!Hopefully the 'New Wembley' will have more happy memories than the old one.

Hears a few pics from the two Cup Finals in the late 90's,when on both occasions we came up against the best team in the country,who were going for the double.(not making excuses like!)
(click on thumbnails for larger image) 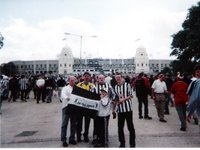 I'm pictured here in '98 modelling the 50s Toffs shirt,I thought the last time we won the cup this is the shirt we wore so it might be lucky,and in '99 I'm seen mostly wearing my 'lucky' 70s yellow away shirt which I wore in every round of the cup,but we still lost both times!

on August 28, 2006
Email ThisBlogThis!Share to TwitterShare to FacebookShare to Pinterest
Labels: Wembley