The blog site has been 'live' now for 50 days, I would like to thank everyone for there contributions and support so far,especially those of you who agreed to become members of the 100FGC and have set up links to this site.Cheers to everyone who has signed a comment in the 'Guest Book' and left those kind words to boost my ego!

The site was originally set up for me to blog my visits to various football grounds,posting pictures and reviews,but I decided to open it up to fellow football fans who share the same interest as myself and I've had a great response so far,many thanks. 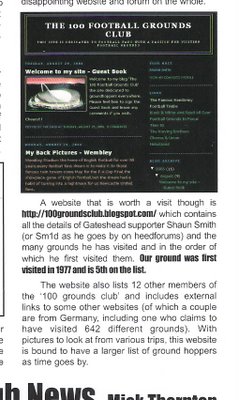 A big thanks goes out to
Alan Percival,programme
editor for 'The Tynesider' the
matchday magazine of Gateshead F.C.
He penned a review in his 'Word on the Web' feature in the programme for the game against Guiseley.
Cheers Alan! keep up the good work. 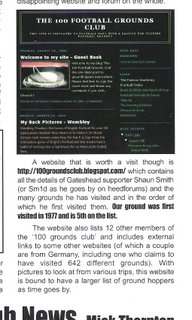 I've had a great response from Germany where Groundhopping is very popular there.The most impressive list of grounds was submitted from Maik Van Den Berg(aka Nobelhopper) who has(as I write) attended matches at 654 in 32 countries,he send me a link to another fellow Groundhopper who has been to......wait for it........1123 in 55 countries!!,well my response to this is "We're not worthy" he should maybe start his own grounds club website and call it the 1000 Football Grounds Club,but I think he'll be the only member.He does have his own website titled 'Diary Of Some Groundhopping' I've added this to my link list,so you can see for yourselves.
Cheers!Enjoy your Football :-)

As the season has got into full swing I still haven't had an opportunity to add new grounds to my list since the pre-season friendlies,but I have earmarked a few that I'll be visiting:

on September 14, 2006
Email ThisBlogThis!Share to TwitterShare to FacebookShare to Pinterest

Best you start a 2000+ club as there are at least 20 myself included groundhoppers in the UK who have reached this target that I know of. 3or 4 are over 3000 nad at least 2 over 4000. However most of us have been doing it for over 25 years