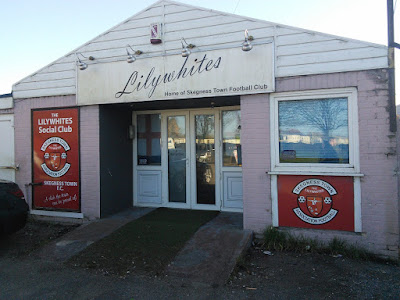 Skegness is a seaside town and civil parish in the East Lindsey district of Lincolnshire.
(Population just under 19,000)
The name comes from the Danish period of settlement of England, although there is no reference to a village named Skegness in the Domesday Book. The town's name means either "Skeggi's headland" or "beard-shaped headland"
Skeggi(meaning "bearded one"), may have been one of the Vikings who established the original settlement to the east of the current town, which was washed away by the sea in the early 16th century.
Home to the first Butlin's holiday resort which was opened in 1936 (went there in 1998 with the breadknife and Laura when she was a toddler. Our chalet got broke into on the first night, swiping my Newcastle shirt and trainers) 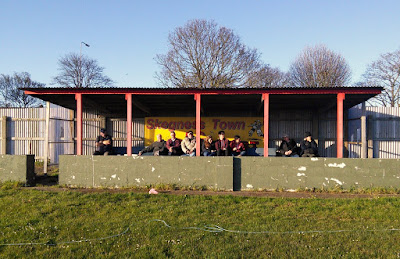 Skegness Town formed in 1946
Founder member of the Lincolnshire League in 1948
Champions in 1951–52, 1955–56
Central Alliance (South) 1956-1958 champions in both seasons.
Joined the Midlands League for one season before it folded, followed by a third Central Alliance (south) league title in 1960–61
Re-joined newly formed Midlands League 1961-1982
1978-79 runners -up (lost out on title by goal difference)
Played one season in the Northern Counties East League as founder members in 1982-83
Lincolnshire League 1983-present

Champions in 2006–07 & 2007–08, 2013-14
Burgh Road
Non-League grounds visited 253
The club have played on Burgh Road since 1947. The ground will be replaced by a retail park with an Aldi store on the site of their current location. The Lillywhites will move just a short distance to Wainfleet Road, where the complex will have the main stadium, two further pitches and a new community all weather 3G pitch.

There is a small covered stand, filled with pairs of blue cinema seats, with a few rows of wooden benches along the side. The Lillywhite Social Club is at the ground entrance with the changing rooms and canteen bar behind the same goal. The rest of the ground is overgrown so spectators are allowed to stand on the pitch side of the wall, along by the team dugouts on the far side. 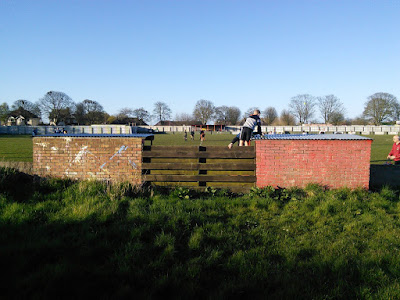 1-0 Will Britton (5’)
The number 9 latched onto a through ball, knocking the ball past the oncoming keeper before rolling the ball into the empty net.
2-0 Will Britton (16’)
Picked up the ball in the inside right channel and fired in a right foot shot into the far corner.
3-0 Will Britton (53’)
Skegness could have been at least 6 or 7 goals up at half time and Britton could back bagged 5 of those, but he finally completed his hat-trick, heading home a left wing cross early in the second half.

Entertainment 7/10
Top Bloke - Will Britton (Skegness Town)
The Lillywhites are on the verge of winning the league after neighbours Skegness United did them a favour with a 1-1 draw with Wyberton. The match played simultaneously just along the road on Wainfleet Road. 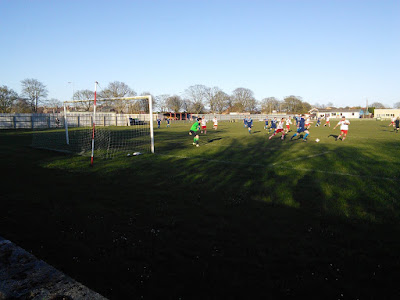 I’ve been to Skegness many times throughout the years(but only once at Butlins mind) and the imminent closure of the town’s long standing football ground meant an unexpected return. Katie text me on Sunday asking if I fancied the trip with her and Lee, as this was the club’s second last game at Burgh Road ... which was an offer I couldn’t refuse. After finishing work I drove down to Katie’s house in Houghton-le-Spring, left the car there, and we were on the motorway and off to the seaside by 2pm.
The long trek through Lincolnshire meant the journey took almost three and a half hours, so just a swift pint and no Chicken Club in the dog rough 'Spoons pub in the town before the match.
Peter Miles (100FgC AF17) was also at the game, having travelled up the east coast from Essex, and I imagine more Groundhoppers will be heading to Skeggy next Wednesday when Town play there finally match at Burgh Road against Wyberton. 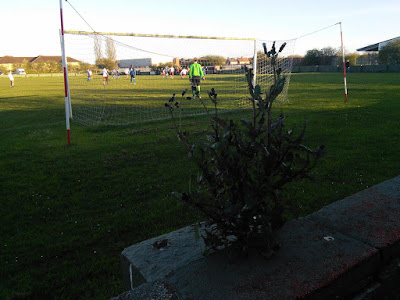