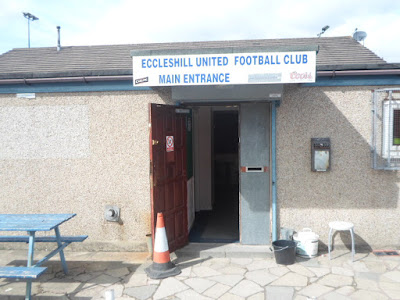 This date has been set in the diary for almost a year, the start of the FA Vase and also the beginning of another football odyssey for Alan Oliver and Calvin Wade. During the 2013-14 season they started off on the road to the final of the FA Cup at West Didsbury & Chorlton,following the winning team through every round, with the eventual finishing line being Arsenal’s triumph over Hull City at Wembley. Last season it was the same format in the FA Trophy, where they soon stumbled upon North Ferriby United, watching every minute of The Villagers fabulous cup run which cumulated in Wembley success.

Last year I spoke to Alan and promised I would be their at the beginning, the end and hopefully somewhere in between, on the last of their FA silverware trilogy. As Alan lives in Manchester, we decided to meet somewhere in between, at a ground both of us hadn’t visited with Yorkshire the obvious central point. When the draw was made in early July, it provided us the perfect location as Eccleshill United were drawn at home to Heaton Stannington.
The club are based in the village of Wrose, which is a civil parish in the City of Bradford in West Yorkshire, about 3 miles north of Bradford city centre. The village sits on top of a hillside which is around 600 feet above sea level, overlooking the Aire valley and Bradford valley.

The football club formed in 1948 originally playing in the Bradford Amateur League, followed by the West Riding County Amateur League. They joined the Northern Counties East League Division Three in 1985, before the league switched to a two division format. Eccleshill United have twice been promoted in 1987 and 1997 and also relegated twice, having played in Division One since 2009. The Eagles won the West Riding County Cup in 2014 and their best performance in the FA Vase was in 1999-2000 when they reached the fifth round. 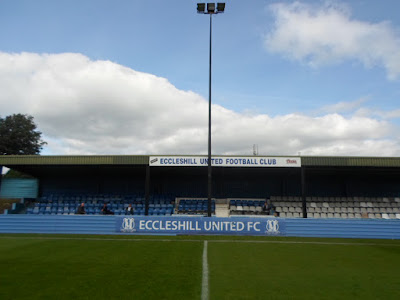 The Vase draw didn’t just deliver an ideal destination, but I scored with the away ball out of the bag, as one of my local Northern League club’s Heaton Stannington head to Plumpton Park. This meant my transport on the players and supporters bus was soon sorted after contacting the Stan’s travel agent James Colwill on twitter. The Heaton charabanc left Grounsell Park at 10.15 and after a piss and pastie stop at Wetherby services, we arrived at the sponsored named Mitton Group Stadium just before half one.

Eccleshill United started life playing on the recreation ground and then on various pitches in the area before purchasing a plot of land on Plumpton Park in 1963. Changes and major improvements were made when the club joined the NCEL, so the ground was fully enclosed by 1990. The main stand sits on the halfway line, decked out with 225 blue and white flip seats. There's a covered enclosure at the turnstile entrance behind the goal, with the refreshment cabin and changing rooms at each side. The team dugouts are opposite the stand with the rest of the ground open with hard standing all 'round. The overall capacity is 2,225 and the record crowd is 715 for a game against Bradford City in the 1996-97 season, the Bantams have also used the ground as a home base for their reserve side 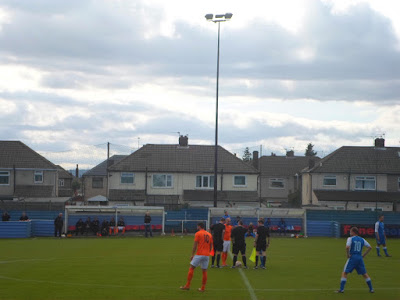 I had a few pints in the clubhouse before Alan, Calvin and fellow traveller Gordon the ref arrived just after 2pm. It was good see Alan again and meet the other two lads for the first time, although I feel I already know them pretty well, having read about their adventures in ‘Another Saturday and Sweet FA’ and ‘Brutal Giants & the Village King’ the two books Calvin wrote on their road to Wembley over the last two seasons.

The lads feared a goalless draw but I told them there was no need to worry as my goal average so far this season after 30 games is 4.43. My goal fest confidence was soon confirmed as the Stan took an early lead from the penalty spot, after a foul on Burns was converted by Jon Wright after seven minutes, but the lead was short lived when Luke Harrop got on the end of a right wing ball to nip in and level the score six minutes later.
Heaton got their noses back in front when a square ball from Telford on the right wing teed up Matt Hayton to slot home, but yet again the Eagles soon equalised when a corner kick was met at the near post by Jermaine Springer to volley home.
Two's each at the break with the game finely balanced with the outcome unpredictable as the second half got under way, although it would be interesting to see how Heaton would react to going behind for the first time. In the 55th minute a free kick into the box was headed clear and fell nicely to Lewis Burns on the edge of the box , who unleashed a splendid right foot volley to put the Stan ahead for the third time.
The hosts applied the pressure late on, desperate for an equaliser to take the game into extra time. Some excellent saves from Dan Rule maintained Heaton's lead until the match was settled deep into injury time, when the ball was flicked into the path of Ben Telford who fired a first time effort past Joe Stead  to make it 4-2. In the end an enjoyable game and a cracking result for Heaton Stannington, as the club recorded their first win in the FA Vase for 34 years. 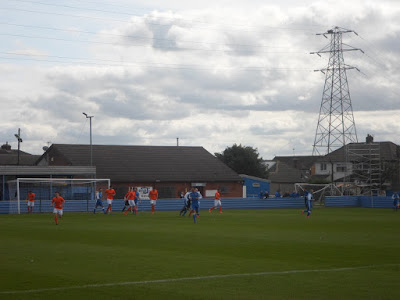 At the game I also met 100FgC Squad #161 Michael Swaffield for the first time, who had travelled with his mate Keith from Saltaire to come and say hello and meet for a drink. We staying in the clubhouse until 5.50 before the Stan bus hit the road, doing a detour through Boroughbridge where we stopped off at the Three Horse Shoes and The Crown, before finally getting back to Grounsell Park at quarter to ten.
Overall a cracking day out, I enjoyed travelling with the Stan players and supporters, who were all very friendly and seem a good bunch of lads. However for me this day was mostly about the start of another adventure for three lads from Lancashire, who will be following today’s winners at Chester-le-Street in the next round on Saturday 3rd October, and I’ll also be their with them for the next chapter of ‘The Unbreakable Vase’, which is a smashing title for a book ... I wonder who came up with that incredible idea? 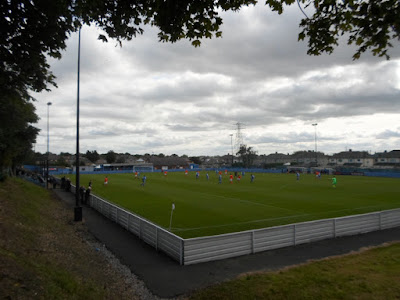 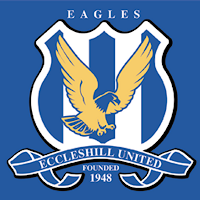 Footnote
Alan Oliver
The matches Alan attended in the FA Cup, FA Trophy and also this season’s FA Vase run is all part of his charity work for The Christie, a charity which is close to Alan’s heart having lost his mother-in-law Pat to cancer a few years ago. You can support Alan in his latest road to Wembley be donated on his charity page at
https://www.justgiving.com/alan-oliver3/

Calvin Wade
You can read about the lads road to Wembley in Calvin’s two previous publications ‘Another Saturday & Sweet FA’ and ‘Brutal Giants & The Village King’ which are both available in paperback and Kindle additions from Amazon.
http://www.amazon.co.uk/Calvin-Wade/e/B007V476YQ/ref=sr_tc_2_0?qid=1441535884&sr=1-2-ent
Posted by Shaun at Sunday, September 06, 2015 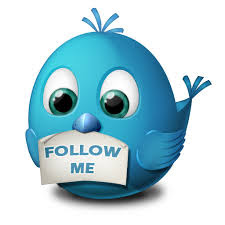