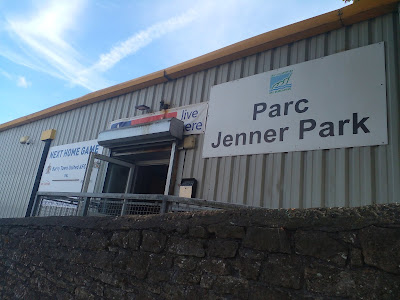 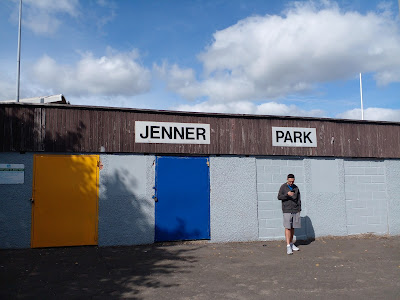 Barry (Welsh - Y Barri) is a town in the Vale of Glamorgan, on the north coast of the Bristol Channel, 9 miles south-southwest of Cardiff, whose name derives from Welsh bar, meaning "hill, summit" (population:52,000)

The area grew significantly from the 1880s with the development of Barry Docks, which in 1913 was the largest coal port in the world. The once small village has absorbed its larger neighbouring villages of Cadoxton and Barry Island, and this seaside resort has several beaches plus the restored Barry Island Pleasure Park.

The town has been the location for several episodes of Dr Who, the brilliant BBC series Being Human, the excellent coming-of-age comedy drama film Submarine , and of course, Gavin & Stacey. 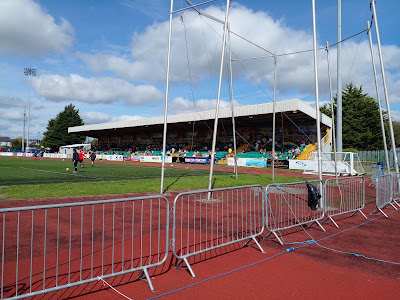 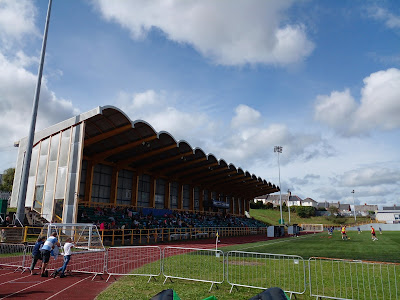 Football in Barry dates back to 1892 with the formation of Barry and Cadoxton District, who during their early years lived a nomadic existence playing on five different grounds under various names, including Barry Unionist Athletic, Barry United Athletic and Barry District. During a meeting in November 1912 at The Windsor public house in Holton Road, it was decided Barry AFC would pursue membership of the thriving Southern League.

The creation of the League of Wales in 1992 meant the club could no longer compete in the English pyramid while based on Welsh soil. As part of a group of clubs known as the Irate Eight, alongside Colwyn Bay, Newport, Merthyr, Bangor, Caernarfon, Newtown and Rhyl, the Town were forced into exile, playing under the guise of Barri AFC with ‘home’ matches staged at Worcester City, while the reserves played league game at Jenner Park.  However, this arrangement would only last one season, returning home and eventually accepted into Welsh League Division One. 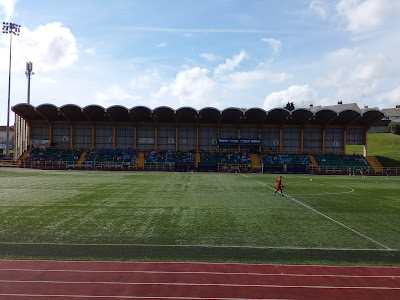 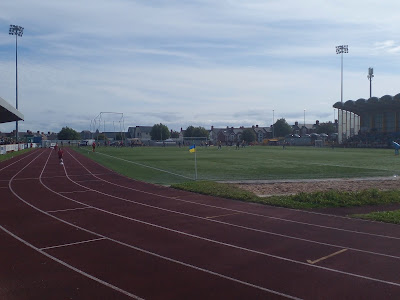 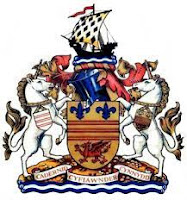 On the 7th May 2013 their problematic club owner withdrew the senior team from the Welsh Football League with just two league fixtures remaining.  Those running the club outlined their intentions to continue as they were, adopting the Barry Town United name to emphasise their continuing unity, aspirations and rejecting this act of  sabotage. The FAW Council announced that the Barry team would have to play "recreational football" before eventually, a High Court judge in Cardiff ruled in Barry's favour, stating that the FAW Council had acted unlawfully in denying them their licence to play Welsh League football. As a result, the fan based club was entered back into the structure. 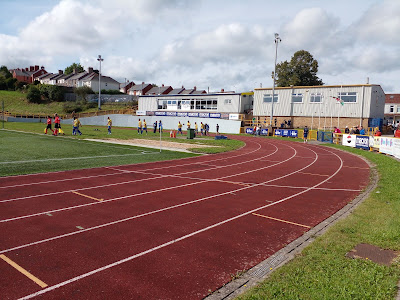 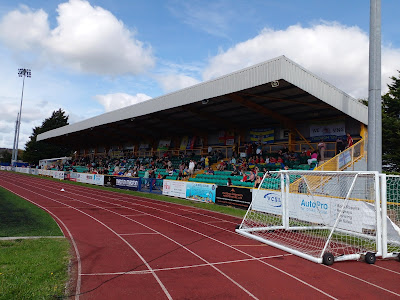 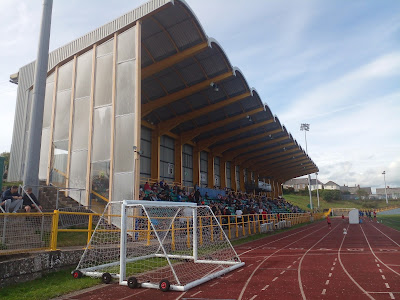 The land was donated by the Jenner family with the ground being built following the club’s formation and ready for the opening fixture of the 1913–14.season. The ground initially had two wooden stands, terracing and floodlights added in the 1940s, so it had the honour of hosting the first ever floodlit football match in Wales, between Barry and Newport in 1949–50.

It has been redeveloped twice, firstly in the 1980s, when the local council installed a synthetic running track, a new all-seated stand and upgraded the floodlights. The second revamp came during the mid-1990s, with a second covered stand which took the seating capacity to 2,500 and brought Jenner Park up to UEFA standards, which saw them host European ties against the likes of FC Porto, Dynamo Kiev and Aberdeen.

In October 2015 work was completed on a state-of-the-art 3G pitch, which was officially opened by then Wales manager Chris Coleman. 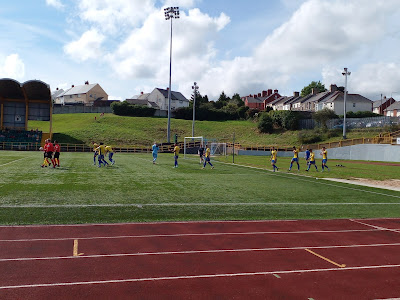 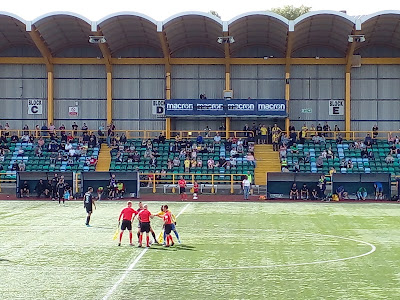 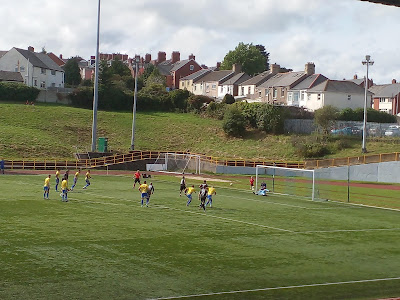 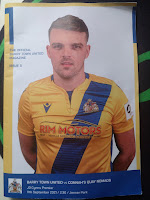 Barry celebrated manager Gavin Chesterfield’s club record 491st match in charge with victory over champions Connah’s Quay Nomads. They survived an early scare when Mike Lewis saved Callum Morris’s penalty kick, then took the lead when Rhys Kavanagh swept the ball in with his right foot following a long throw-in. Any chance of the visitors drawing level was damaged ten minutes into the second half, when John Disney was shown a red card after denying Kavanagh when he was clean through on goal.  The home team were comfortable winners, cheered on by a big crowd on the day of the ‘Barry Town Bonanza’ which was a special family day to mark Gavin Chesterfield’s achievement, with pre-match entertainment and free entry. 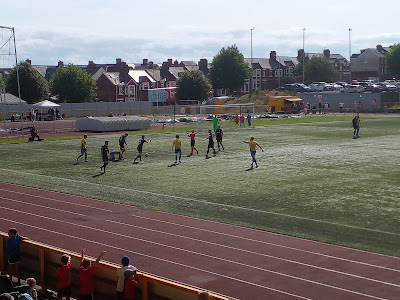 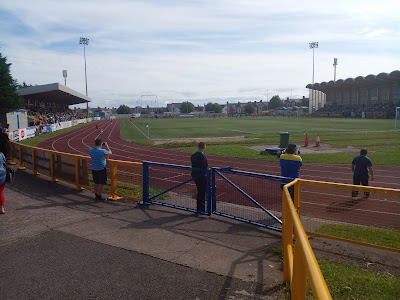 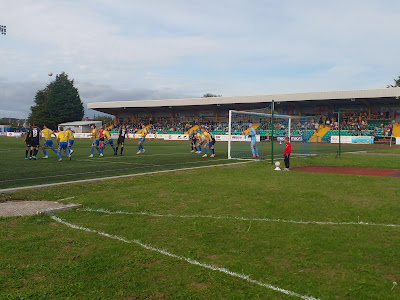 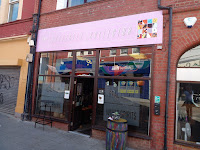 The visit to this resort was the final day of our holidays, which saw a mega pub crawl of Bristol, Weston-super-Mare, Bath, Cardiff and finally Barry.(Final total:69 boozers) On arrival we called for drinks in the Barry West End Club, the local ‘Spoons and the GBG listed ‘The Butterfly Collector’.  I had wondered if this micro-pub was named after The Jam song and this was certainly confirmed on arrival, with an array of band memorabilia on show. I left the breadknife in the pub and headed along the road to the match, which was very enjoyable and the large attendance made for a great atmosphere.