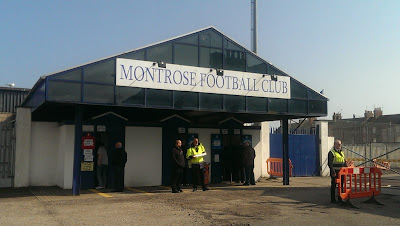 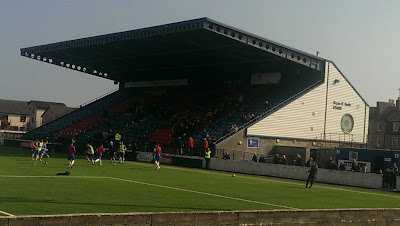 Montrose is a coastal  town and former royal burgh in Angus, situated 38 miles north of Dundee (population 12,000) It is the northernmost coastal town in Angus between the mouths of the North and South Esk rivers, which developed at a natural harbour which traded in skins, hides and cured salmon in medieval times. It is an important commercial port for the thriving oil and gas industry.The town skyline is dominated by the 220-foot steeple of Old and St Andrew's Church, designed by James Gillespie Graham and built between 1832 and 1834. 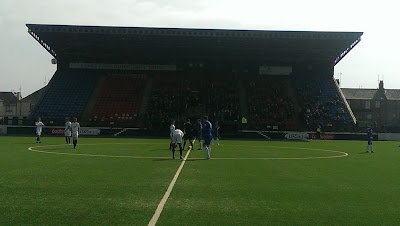 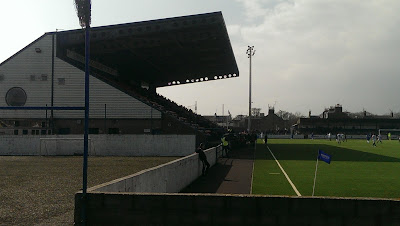 Montrose FC were founded in 1879. playing their first match on the 8th November against Arbroath Wanderers, The club website states that football had been played on the Links for a long time before easier travel due to the railways, plus the increased leisure time available to workers, meant that teams were able to play outside their own localities. As a result there was a need for an agreed set of rules. The press report stated at the time;
'Owing to the Montrose players not understanding the technicalities of the rules, it being the first time they had played under the above rules, during the second period of play was of a give and take nature, neither sides scoring, although Montrose by this time understanding the game better played a plucky game, carrying the ball several times rather close to the Arbroath posts. The game was witnessed by a large number of spectators.’ Montrose lack of knowledge of the 'new' rules saw the host side lose 4-0 with all of the goals coming in the first half.

The Gable Endies  joined Scottish Football in 1923 in the newly founded Scottish Third Division. They achieved a creditable fourth-placed finish in their debut season and are one of only three sides from that season who are still competing today in the SPFL, the others being Brechin City and Queen of the South. 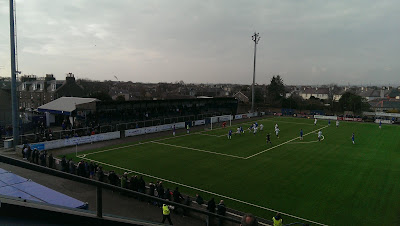 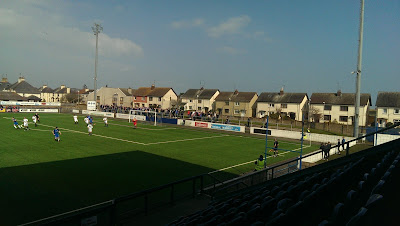 Links Park Stadium
Wellington Street
Montrose
Angus DD10 8QD
Capacity 4,963
Record attendance; 8,983 v Dundee, Scottish Cup quarter-final, March 1973.
Current Scottish League grounds visited 36/42
Links Park was opened in 1887, with the club financing the new ground by renting the pitch out for circuses and livestock grazing. The first stand was built in 1920, with cover added over the Wellington Street end of the ground in the 1960s and floodlights installed in 1971.
Following the arrival of Bryan Keith to the club, the ground was vastly improved in the 1990s with the wooden Main Stand replaced by a cantilevered stand in his name. The stand has 1,258 red and blue flip seats, which is quite steep with no supporting pillars or windshields. The rest of the ground has terracing, with four skinny corner floodlights and a 3G pitch, which was laid in 2006 then replaced in 2015. 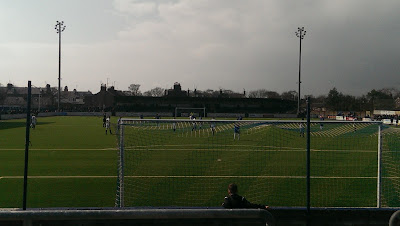 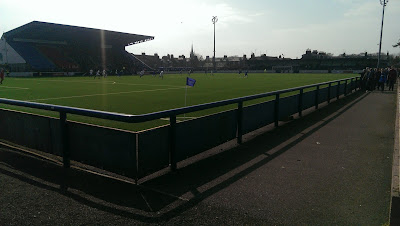 
Att.805
Weather:sunny
The match was settled early on with Chris Templeman knocking in a Andrew Steeves left wing cross from close range in the 10th minute. Montrose were on top in the first half until the match came to a sudden standstill in the 29th minute after a horrific leg break to Berwick striker Ousman See. Play was delayed for 70 minutes as the injury was too severe for the player to be moved, so there was a long wait for the paramedics to arrive from Dundee Ninewell Hospital, which is 30 miles away.
When the match resumed at 4.38, the game became a tame affair, with Berwick putting up a plucky performance to hold the title chasers to that solidary early strike.
Matchday Stats
MFC 1 (Templeman 10)
BRFC 0
Entertainment 6/10
Spondoolicks
Admission £13
Programme £2
Pin badge £3.50
Pie and coffees £3 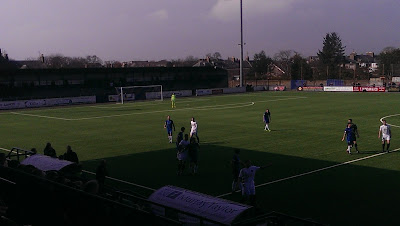 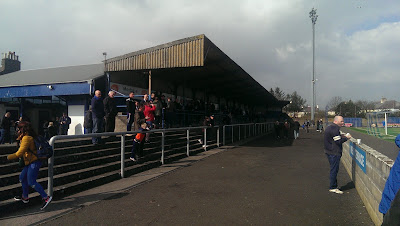 #HeedHopper
Depart on the 0620 to Edinburgh, then onwards to Dundee arr. 0940.
1pm train from Dundee to Montrose and returning on the 1751, back in Newcastle at 2140.
I arrived in Montrose at 1.35 after spending the morning dipping my toe in some Scottish Amateur football in Dundee. I called for a pint in the George Hotel and the Market Arms, before strolling along to Links Park. I was looking forward to a couple of pints after the match, but the long delay at the game meant it was a jog straight back to the station. On the train I had a catch up with James Little who got on at Dundee, following his game of choice at Forfar Albion. A long but enjoyable day which has got me in the mood of make an attempt to finally finish the Scottish 42. 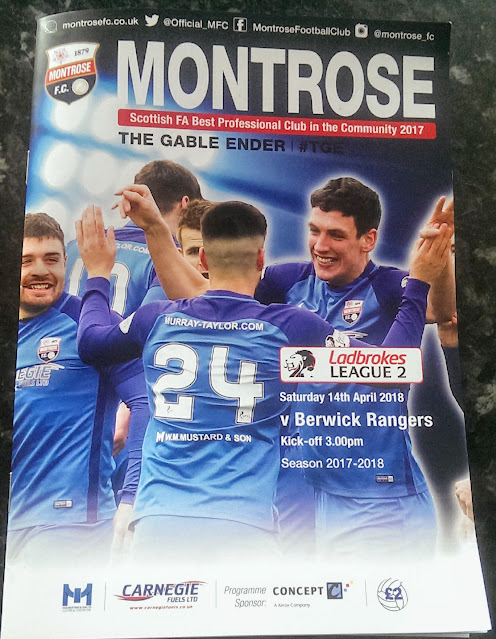